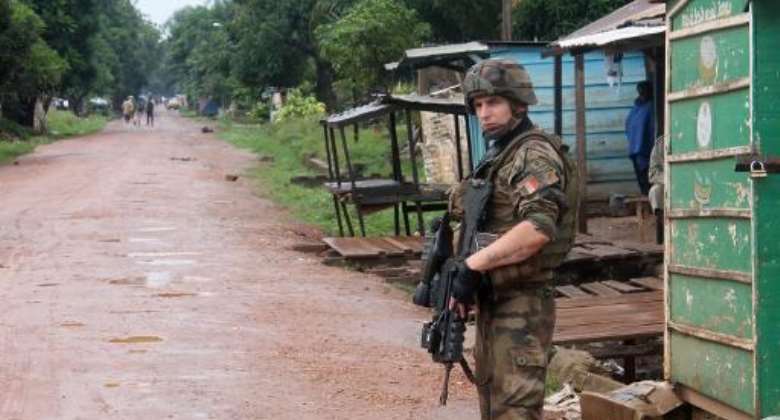 French soldiers from the European Union's Eufor mission patrol in a street of the PK5 district in Bangui on August 21, 2014. By Pacome Pabandji (AFP/File)

Prime Minister Mahamat Kamoun, who was appointed earlier this month, has been tasked with bringing rebel groups back into the mainstream to try to end the ethnic and religious violence gripping the country.

In the latest fighting, at least eight people were killed when armed groups clashed on Wednesday and Thursday in the southeastern region of Boda, the African peacekeeping force MISCA said.

"This followed the death of a 14-year-old Muslim boy... and a second Muslim subject who was looking for firewood," a MISCA officer told AFP on Friday.

According to an official decree read on national radio, the new cabinet will be made up of 27 ministers and two deputies.

While some members were part of the old government, the group also includes three representatives from the mainly Muslim Seleka group, and two from the majority-Christian 'anti-balaka' militias.

The UN peacekeeping chief for the country, Babacar Gaye, had pressed for a new government to lead the country out of strife and elections.

The previous government resigned after the signing of a ceasefire pact in July.

Months of fighting in the poor and deeply unstable country has left thousands of people dead and forced around a million from their homes.

Djotodia stepped down in January under international pressure for failing to halt widespread atrocities against civilians by rogue rebels, which also led to the emergence of "anti-balaka" (anti-machete) vigilante forces in Christian majority communities, bent on vengeance against Muslims.

A hospital worker said on Thursday that five people had been killed this week in fighting between armed militants and French peacekeepers in Bangui.

A staff member at the capital's community hospital said nearly 40 people were also wounded in the clashes.

It was also reported on Friday that three French soldiers had been injured following the clashes in a commercial area of the capital known as PK-5, which has become the last Muslim enclave in Bangui.

The fighting erupted after Gaye announced some 1,800 fresh UN peacekeeping troops will arrive in the country on September 15, bolstering the 5,800-strong African contingent in a mission to be known as MINUSCA.

"My main asset is not only to have troops, but to have a comprehensive approach for the protection of civilians and the stabilisation of the country," Gaye told reporters after briefing the UN Security Council.

Hottest Photo Reports
Catch up with all the political quotes from our politicians.
Advertise here
More from Africa
ModernGhana Links
TOP STORIES