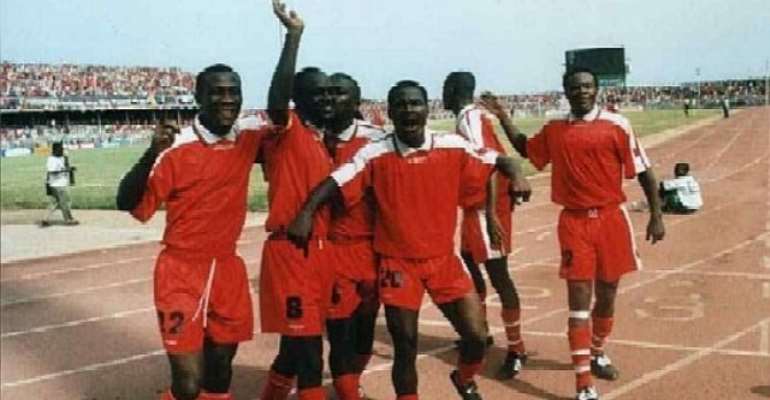 As part of their preparations toward the epic December 8th Cup Winners' Cup finals, against WAC of morocco, Fabulous Asante Kotoko played to a hard-fought 2-1 victory over the Equitorial Guinean national team, the Nzalangu, on their favourite grounds in Kumasi.

The match which also formed part of the build-up process for the Guineans, and watched by an average crowd, turned out to be a worthy exercise as it opened the loop holes in both teams. But to a great extent , it was more of an entertainment as it did very little or at best nothing to sense the purpose for which it was organised.

No sooner had the two sides been ushered into action by Kumasi-based referee, G.K. Zorve when Kotoko gave their impression of snatching the leader through hit-man, Arhin Duah's long volley which grazed the far upright in the second minute, much to the relief of Nzalangu boys.

Playing without most of their regulars, Kotoko continued to mount siege into the Nzalangu area, but lack of force at goal deprived them of the opener. Frank Osei and Abadi Sarfo made a lot of incursions into the Guinean goal area, but their efforts were thwarted by Oku Benjamin in post for Nzalangu.

Marshalled in midfield by Hamza Mohammed, Kojo Poku and Anas Mohammed who propelled the front runners, Frank Osei finally opened the scoring for Kotoko after squandering begging chances, in the 43rd minute with a drive outside the box after a solo run to set the stadium alive.

Wit h their pride wounded, the Guineans lifted their game, especially in defence with Beta Inocecio, Belope Bainimdo and skipper Biyogo Hector, keeping the Kotoko attack at bay to end the half.

Three quick changes by Nzalangu beefed up their attack which gave the defence of Kotoko a lot to worry about and forcing keeper Owu to make some saves.

However, In the 73red minute a beautiful combination from substitutes Bidjo Niguel and Nicha Jocus tore the Kotoko defence apart, leaving Ben Owu at the mercy of Changue Jean Carla who silenced the stadium by planting the ball in the net for the much-needed equalizer, and to the delight of the scarce Guinean supporters.

The reds accepted the challenge and rounded the Guinean half forcing Oku Benjamin to please the crowd with some fine saves. But that was shot-lived as hard running Aziz Ansah beat an off-side trap to fire home a thunderbolt from a close range, after pouncing on Oduro's free-kick in the 87th minute.

The fans were given a teat when regular goalie Osei Boateng came on for injured Kojo Poku to make some brillant touches. Questions were asked as to why Kotoko paraded a second-string team with first three substitutes whilst preparing for a crucial match.

On behalf of GHALCA, the Chairman of King Faisal Football club, Alhaji Grunsah, presented a bull worth ¢4m and ¢1m cash to Kotoko as their contribution to Kotoko, preparation towards the December 8th duel. The management of the team thanked GHALCA for their concern and healthy gesture and pledged to win the Mandela Cup for the nation.