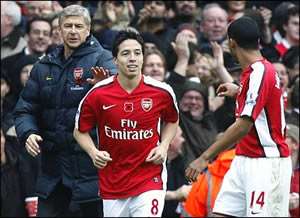 Jeremie Aliadiere had Boro's best chance but he failed to beat keeper Manuel Almunia when clean through.

Classy Arsenal dominated throughout and Fabregas rounded Jones before slotting home to wrap up a deserved victory.

It was a 20th unbeaten league game on the trot for the Gunners and they showed plenty of freedom and panache.

With Sir Alex Ferguson watching from the stands, manager Arsene Wenger resisted the temptation to rest key players ahead of the midweek trip to Manchester United in the Champions League semi-finals.

Boro, who lost a club-record 10th away game in succession, could argue they were on the wrong end of two debatable refereeing decisions, however, in truth they were outclassed.

The visitors' main downfall was allowing Arsenal too much time and space to play the type of football the Gunners are so good at.

Boro were content to sit back and try to soak up Arsenal's pressure at a sun-bathed Emirates stadium and try to catch their rivals out on the counter-attack.

The vision of Fabregas and Andrey Arshavin was outstanding and the duo combined with Bendtner to carve out the opening goal.

Fabregas released Arshavin on the right before running into the Boro box to receive the Russian's pull-back and power a strike into goal - his first since last October.

Boro were unhappy the goal was allowed because of Bendtner's position.

And, they were left further aggrieved when they were denied a penalty for Bendtner appearing to catch a Stewart Downing corner with a mixture of his upper chest and upper arm.

Boro belatedly raised the urgency to their game and Downing tested Almunia with a low 22-yard strike which the Spaniard proved equal to.

Almunia was again Boro's nemesis as he denied Aliadiere, who had been played clean through on goal from Downing's cross-field ball.

Boro's need and desire to attack almost allowed Theo Walcott to double Arsenal's lead but his effort from an Emmanuel Eboue pull-back was saved by Jones.

Arsenal did not have long to wait for their second and it came after Fabregas latched on to a defence-splitting Eboue pass before rounding the on-rushing Jones and slotting in from just inside the area.

Boro's efforts faded after the goal as Arsenal took off Fabregas and Walcott as they consolidated their position ahead of their trip to Old Trafford in midweek.

Arsenal boss Arsene Wenger:
"We want to catch Chelsea and we will give absolutely everything in the last four games. We play Chelsea at home so you never know.

"Victory was important for us before we go to the the semi-finals of Champions League against Manchester United.

"It's important you put yourself in a strong position in the league. Every win makes you a bit stronger."

Middlesbrough boss Gareth Southgate:
"Arsenal are a class team. We knew it would be tough and in the end they have won it pretty comfortably.

"Bendtner is clearly interfering with play because he is stood in front of the goalkeeper. That hasn't gone for us but maybe we will get one at home next week against Manchester United.

"All the games are all crucial for us now. While there is hope we have to keep fighting and we will.

"One result changes a lot of people's perceptions on things and if we get a result next week then it can turn things on its head."