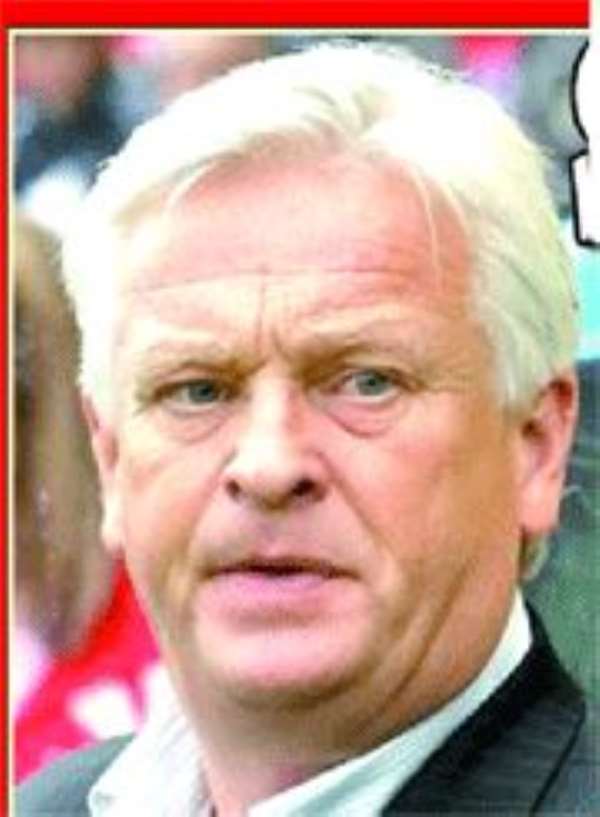 If Black Stars stand-in coach, Sellas 'Borbor' Tetteh, is hoping to be handed the substantive job, he should forget it!

He had hoped to ride on Ghana's flying start in the World Cup qualifiers to land the job, but his employers are looking elsewhere for a top-class expatriate coach.

By the criteria set by the Ghana Football Association's (GFA) Search Committee for the replacement of Claude Le Roy, Borbor, who for close to six years was an assistant on the job, does not qualify, and the rules will not be bent for him.


The criteria includes having a Coaching Licence A certificate, a proven track record and the experience as a head coach handling a top class team.


And Graphic Sports investigations have learnt that the GFA's search radial to fill the vacant Stars job has been zoomed in on Han Backe who, until earlier this week, was an assistant coach to his compatriot, Sven-Goran Eriksson at English Premiership side, Manchester City.


The Swede is among the several expatriate coaches who have submitted their application for the job and seems to fit into the FA's interest which also includes going for someone from the Scandinavian side of Europe.


Backe has never coached a national team but won four Danish titles with FC Copenhagen and Aalborg as a coach before joining Manchester City but has also been relieved of his post together with his colleague Tord Grid following the dismissal of their boss, Eriksson.


This latest update looks likely to confirm the GFA's determination to possibly get a new coach even before the first round of the 2010 World Cup and Nations Cup qualifiers rolls to an end.


According to FA President Kwesi Nyantakyi, even though Tetteh is competent, he is not ripe for the job and the GFA will thus go ahead to recruit a substantive coach despite Coach Tetteh declaring his readiness for the job and the support he seems to enjoy from many football followers.


“His competence is not in doubt, but I think he is not ripe for the job. We are looking forward to possibly recruit a new coach by this weekend,” Nyatankyi stressed, in apparent reaction to Coach Tetteh asking the FA to give him the job moments after leading the Stars to a winning start with a 3-0 result over Libya at the Baba Yara Stadium last Sunday.


A member of the GFA Executive Committee and spokesperson, Randy Abbey, believes Tetteh has not had the opportunity to be in charge of a team, or being a leader, and he must therefore bid his time.


“The Stars job is not about coaching as is done at the age-bracket teams. It is all about having the courage to manage the egos of the players in the team, as well as being on top of tactics and it is not an issue of colour or race.


“The coach must be tactically very disciplined and must have the courage to call the players and his staff to order. There is no denying the fact at this stage that the players may want to have their way off the field of play, and even on the field of play, to try to play, to their own tactics and it will take a resolute coach to bring them to order,” the GFA spokesperson further explained.

He said the coach must also be ready to exude that confidence that will attract respect from both, his supporting staff, as well as the playing body and for him Borbor still has some learning to do because he has never been in charge of any team.

He said contrary to the perception that there are no issues with the current Stars which needed a diligent coach to take of in order not to degenerate into something else on the field, “there are always issues with the Stars which at different levels we have to find ways of dealing with,” Abbey said.


Asked again if Coach Tetteh was competent enough, Abbey's answer was a simple 'yes,' but as to whether he was ready for the job, Abbey said “he does not think so.”


Abbey, would however, not comment on the fact that Backe seems to be the favourite of the GFA, only saying that when the final decision is made, it would be made public.

Give EC Benefit Of Doubt On 24-hour Results Promise – CDD-Gh...
7 minutes ago