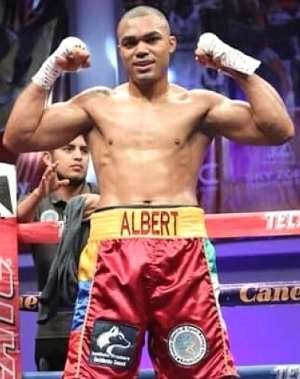 Ramirez who was a last-minute replacement for Lenar Perez came in with bigger experience having won 13 of his 14 bouts via knockout. By this loss, Dickson has also lost an opportunity to leap into the top 15 rankings of the cruiserweight division.

In an interview with Joy Sports, Dickson’s trainer Carl Lokko said the loss was a very unfortunate one.

“I am disappointed and this is hard luck. I expected something higher than this. But it’s a game and we have to take it on good faith,” he said.

“I have to sit the boxer down psyche him up and reorganize bounce back and take it from there. What happened before the bout drained the boxer.”

Lokko is confident that his boxer will pick up the pieces and move on from this unfortunate loss.

“He is a young chap and this is his ninth fight and he still has a long way to go. We will get back to the drawing board and get him back on track,” he added.

Dickson’s challenges on the night seemed to have been fueled by a few factors including the fact that he was fighting out of his homeland Ghana for the first time. He recorded his previous eight wins before home fans and had to fight without their cheers for the first time in his professional career.

Ramirez’s replacement of Cuba’s Lenar Perez was because the latter could not obtain a French visa to travel. So Ramirez came in with bigger experience and the tag of a knockout specialist with 14 straight wins in his professional career.

The Venezuelan boxer gave proof of it in less than three minutes. The situation for the Ghanaian was further complicated by the fact that Ramirez was a southpaw an opponent stance he hadn’t exactly prepared for, according to his trainer.

Dickson, who is the current cruiserweight champion in Ghana, will return home and will be expected to defend the title in the coming months.