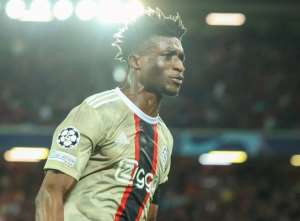 Mohammed Kudu netted his fifth goal in his last four games for Ajax as they suffered a 2-1 defeat to Liverpool in the UEFA Champions League on Tuesday night at Anfield.

The Ghana international canceled out Mohammed Salah's early strike to end the first half 1-1.

However, Joel Matip scored late in the game to ensure Jurgen Klopp’s side secured their first win after two games.

Kudus won the Man of the Match in the opening game against Rangers last week after he scored and assisted.

The Black Stars player followed that up with a brace against Heerenveen in the Eredivisie last weekend before his goal against Liverpool.

The 22-year-old’s goal at Anfield means he has now scored five goals and assisted once in his last four games for Alfred Schreuder’s side.