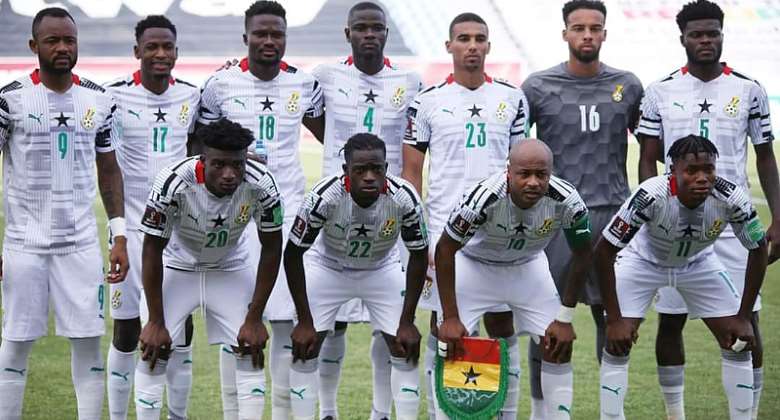 Following the disappointment of a group-stage exit at the CAF Africa Cup of Nations earlier this year, Milovan Rajevac was dismissed as Ghana coach, with Otto Addo named as his successor on an interim basis.

The former midfielder, who won 15 caps for his country as a player, wasted no time in guiding the Black Stars to FIFA World Cup Qatar 2022 qualification and, as a reward, will lead them at the tournament. As Ghana prepare to travel to Qatar with an extremely exciting squad, FIFA+ has picked out five players who could play a key role in their campaign.

Amartey is already one of the most experienced players in Addo’s squad. After winning the Danish championship and two domestic cups with FC Copenhagen as a youngster, he moved to Premier League club Leicester City in January 2016, where he was part of the Foxes’ surprise title-winning team that same year.

Although Amartey experienced his ups and downs during his time at Leicester and eventually lost his place in the starting line-up, he is now one of just three players from that championship-winning squad who still play for the club.

This in itself highlights the esteem in which Leicester hold the center-half, who can also be deployed as a defensive midfielder.

More recently, he won the 2021 FA Cup and FA Community Shield, while last season he made 40 appearances across all competitions and has played every league game of the current campaign for Leicester.

Since making his international debut in 2015, Amartey has won 43 caps for his country, making him one of Ghana’s most experienced players.

He was named in the official team of the tournament when the Black Stars finished fourth at the Africa Cup of Nations in 2017.

The 27-year-old’s experience, strong leadership, and tough tackling will make him a key figure in the heart of Ghana’s defense, which will be an important role as they face Portugal, Korea Republic, and Uruguay in Group H.

Having played every minute of all six internationals since Ghana appointed their new coach – including one as captain – it is clear that Addo has total confidence in him.

Like Amartey, Mohammed Kudus also began his career in Denmark. He made 57 appearances for FC Nordsjaelland before moving to Ajax in the Eredivisie ahead of the 2021/21 season.

Since then he and his team have won the Dutch championship in each of the past two seasons as well as becoming KNVB Cup champions in 2021.

Kudus has also featured for Ajax in the UEFA Champions League and UEFA Europa League, most recently grabbing a goal and an assist against Rangers to earn himself both the player of the match award and a spot in the Champions League team of the week.

While Kudus is often deployed as a super sub for Ajax and also occasionally features as a striker, his preferred position is attacking midfield, where he usually plays for Ghana.

The 22-year-old has scored five goals in 16 international appearances to date and, unlike at Ajax, seems to be a permanent fixture in Addo’s starting line-up. His attacking instinct means he lends a resounding element of energy and unpredictability to Ghana’s play.

As the Black Stars are likely to rely on counter-attacks time and time again at the World Cup, Kudus’s reliable passing and creativity will make him the perfect linchpin as his team switch from defence to attack.

Despite his young age, he is not afraid to take responsibility on the pitch and has the potential to cause a stir in Qatar. It is not for nothing that he is often referred to as one of the brightest talents of his generation.

Another rising star is Fatawu, who is currently on the fast track to success. In the first half of the 2021/22 season, he scored six goals in seven games for Dreams FC in the Ghanaian Premier League while still only 17.

This was followed by a move from his homeland to Lisbon giants Sporting’s academy in April 2022, where Fatawu initially trained with the U-23 team before he could be registered to Sporting’s first-team squad.

Since then he has been in the squad for every Liga Portugal and Champions League match and has already made his first few substitute appearances, primarily on the right wing.

One curious fact about Fatawu is that he has more caps for Ghana than appearances at the club level at this point in his career.

He has already pulled on the national team jersey 12 times and has gained the trust of Addo, who named him in the starting 11 for both legs of their World Cup play-off against Nigeria.

With his dribbling skills and quality in one-on-one situations, the left-footer should cause problems for opposition defences in Qatar and create chances for the Black Stars down the flank.

The 18-year-old’s fine shooting technique also makes him an option in dead-ball situations.

Having played 107 internationals, Ghana’s captain is on the brink of replacing Asamoah Gyan (109 appearances) as their most-capped player, while the 23 goals netted by the son of Abedi Pele have already earned him a place among his homeland’s top five goalscorers.

The fact that Ayew became a FIFA U-20 World Cup winner and African champion with Ghana in 2009 speaks for itself and reflects his significance within the national team.

Together with younger brother Jordan (81 caps, 19 goals), who is also a key member of the side, the top scorer at the 2014/15 Africa Cup of Nations should bring years of international experience to the Black Stars’ attack and contribute a few goals along the way.

Ayew has spent much of his career in France and England, winning two French League Cups and three Super Cups with Marseille between 2010 and 2012, and making a total of 182 appearances in Ligue 1.

After moving to England he played 89 Premier League games and 87 Championship matches for Swansea City and West Ham United.

He has been playing for Qatari club Al Sadd since last season, winning the championship title at the first attempt, which means he should be well used to life in the host nation by the time the World Cup kicks off.

It should also enable him to give the younger players in the squad a helping hand, with plenty of knowledge and experience to share after dazzling on football’s greatest international stage from a young age.

He finished South Africa 2010 as runner-up to Best Young Player recipient Thomas Muller and scored two goals at the next tournament in Brazil four years later.

Williams has yet to win an international cap for Ghana.

Born in the Basque Country, the 28-year-old has spent almost all his career at Athletic Bilbao in Spain, making almost 350 competitive appearances and winning the Spanish Super Cup in 2016 and 2021.

He has not missed a single La Liga match since April 2016, breaking the record for most consecutive appearances previously held by Juan Antonio Larranaga in October 2021.

He has now played more than 230 matches in a row to extend his record even further. During this time, Williams was regularly included in the wider Spanish national team set-up, winning an international cap under Vicente del Bosque in a friendly against Bosnia and Herzegovina in 2016.

As the son of a Ghanaian, Williams joined several other players in switching his allegiance to Ghana in July 2022 and has since been called up to the national team for the upcoming World Cup warm-up matches against Brazil and Nicaragua.

It will be exciting to see how he announces his arrival with his new team, as the Black Stars are certainly gaining an extra attacking threat in Williams.

The extremely quick and lively striker is perfect for counter-attacking play and one-on-one situations against opposition defenders.

We haven’t rejected Justices Gaewu and Koomson – Appointment...
35 minutes ago

Stop the wrongful, multiple sale of lands — Akufo-Addo to ch...
35 minutes ago