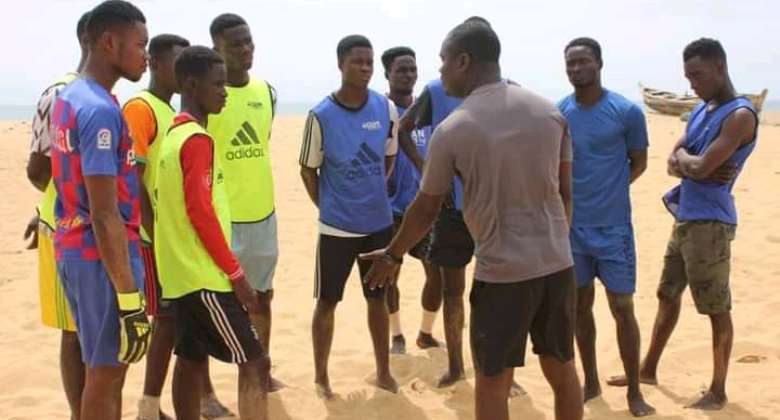 Mr Stephen Badasu, the head coach of Tegbi based Ocean Stars, a beach soccer club in Anloga District of the Volta region has said the team is poised to win the first ever Beach Soccer FA cup this year.

According to him, it is going to be a tough match from the group stages to the final matches.

He mentioned that the playing body and the technical team will be meeting soon to make preparations for the newly introduced Beach Soocer FA cup.

The Beach Soccer FA cup draws which was held at the GFA Secretariat on Thursday May 5,2022 saw Tegbi Ocean Stars in group B with teams such as Nugua BSC, Pee Talent Management and Volta colleagues Havedzi Mighty Warriors.

"We still have some days to train and play some friendly matches to prepare for the FA cup this year," he added.

Mr Yaw Ampofo Akra, the Ghana Beach Soccer national chairman urged all team players to put up their performance to book a place in the National Beach Soccer Team, the Black Sharks for national duties ahead.

He said the main Beach Soccer league is scheduled for next year and they are expecting more talents from all teams.

"Next year will be full of Beach Soccer activities because we will have regional Division 1 beach soccer league in all region as well to boost the level high," he said.

Mr Prosper Harrison Addo, the GFA general secretary who was at the occasion also mention noted that the Ghana Football Association is highly motivated to push beach soccer to the level like any other league in the country.

He added, "equal attention will be given to beach soccer team, the Black Sharks just like the senior male national football team Black stars as well as national teams.

"Whatever any national teams benefited from, we will make sure you also have your share because GFA is hopping to move beach soccer to that high height."

ModernGhana news further understand that, GFA however supported all the 16 participating teams in the upcoming Beach Soccer FA competition with 4 puma beach soccer ball for training towards the tournament.

The Beach soccer games are scheduled to take place at Laboma Beach and Ghanaman centre of excellence, Prampram starting from May 21 to 22.

Bellow is the full fixtures: