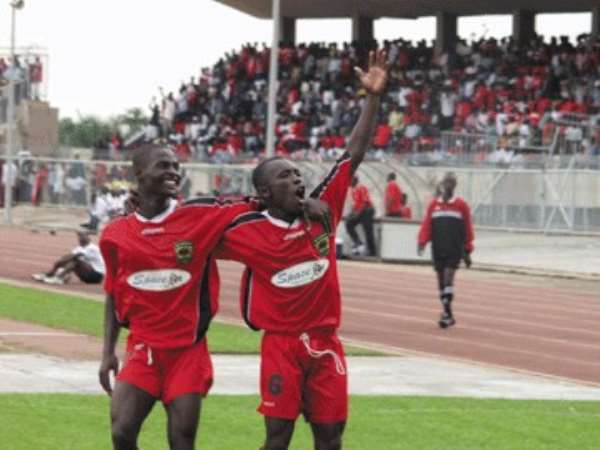 Michael Osei scored both goals in the 71st and 85th minutes respectively to send Kotoko on 16 points, three clear of defending champions, Accra Hearts of Oak who are second.

Olympics put up a stunning performance against Kotoko right from the blast of the whistle and made series of incursions into the Kotoko territory but could not penetrate the formidable defence of the homers. The Kotoko attacking machinery led by speedster Michael Osei responded and punched holes in the Olympics defence but Osei missed a good chance in the 11th minute.

Olympics were determined to deflate the ego of Kotoko and made a threatening move in the 31st minute but goalkeeper George Owu came out strongly to save the situation while Kwabena Dodzi's shot in the 37th minute went wide.

Kotoko came into the picture as Shilla Alhassan hit the crossbar on 39 minutes to end the first half goalless.

On resumption, Michael Osei wasted a golden chance in the 49th minute and Olympics' Andrew Pomayie also missed a good chance in the 52nd minute.

Olympics sent in Joseph Tagoe for Amui Quaye in the 54th minute to strengthen the attack and this brought renewed vigour as they carried the game to Kotoko but could not break their impregnable defence. Kotoko also sent in Isaac Boakye for Anas Mohammed and Stephen Oduro also gave way to Michael Asante in the 60th minute.

The game then became balanced until the 71st minute when Michael Osei shot Kotoko into the lead with a header from Yusif Chibsah's cross. Osei increased the tally in the 85th minute when he finished off a pass from substitute Nana Arhin Duah who had come on for Shilla Alhassan.