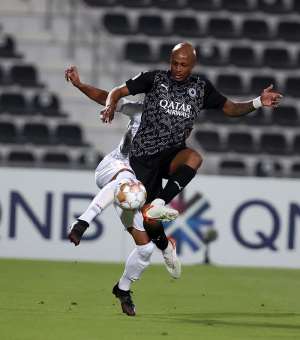 Ghana international, Andre Ayew scored with a fine effort on Tuesday evening to seal a 3-1 comeback win for his Al-Sadd SC outfit in the game against Umm Salal.

The summer signing last Friday featured for his new club when they defeated Al-Rayyan on penalties to lift the Emir Cup.

With a first trophy under his belt in Qatar, Andre Ayew is aiming to win more before the 2021/2022 football season is concluded.

Today when his Al-Sadd SC side returned to action in the Qatari Stars League, the Black Stars forward started for the team as they played away from home.

He did not only glitter with his performance but he scored four minutes after recess to give his club a two-goal lead in the second half.

Prior to his equalizer, goals from Akram Afif and Santi Carzola turned the tide in favour of Al-Sadd SC after an early strike from Yaseen Al-Bakhit had shot Umm Salal into the lead.

With his goal today, Andre Ayew has scored six goals for Al-Sadd SC in the Qatari Stars League this season after making seven appearances for the side.