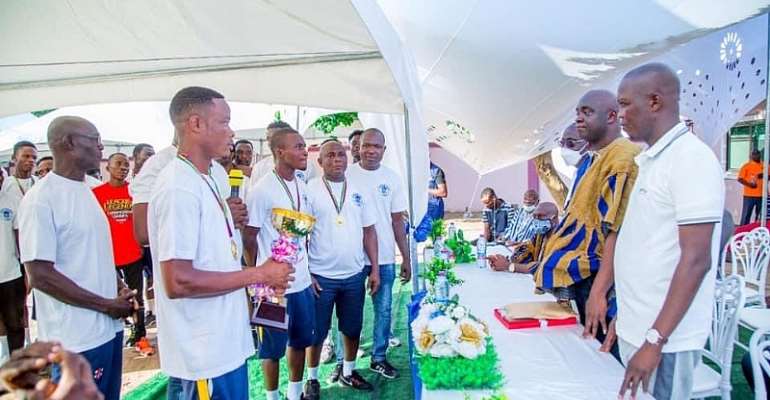 The management and playing body of Akatsi All Stars have presented their recently won Division Two League Trophy to the Board and Patron of the club at Akatsi.

The presentation, which was held in a brief ceremony, was aimed at celebrating the club's victory to the second tier league. It was to officially introduce the team to its financiers.

The patrons and board of the club are Togbgui Dorglo Anumah VI, Paramount Chief of Avenor Traditional Area, Dumegah Joseph Kwaku Hogli, known as Lovely, and Benard Ahiafor, Member of Parliament for Akatsi South.

This is the club's highest success since its formation in 1984.

Akatsi All Star's has had incredible stride in the regional division two league, surpassing over 56 other Division Two League clubs from the preliminary stages to the Sub-middle League and then after the Super Middle League.

At the Super Middle League, eight (8) clubs made qualifiers and were grouped in two, Group A and B.

Matches were played from Monday through to Friday with the exception of Saturday, which was to cater for a likely playoff, and on Sunday the two teams who topped their groups met for an intriguing and colorful final.

The Champions of Champions between the two top teams produced no goals in both halves, with their attackers missing the chances that came their way.

Several efforts in a bid to break the deadlock were forfeited as both teams settled on penalties to determine the winner.