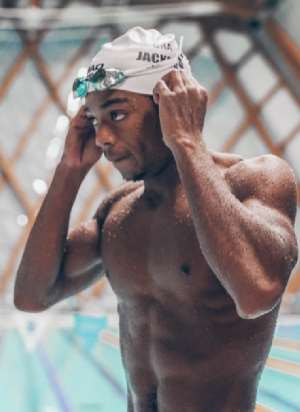 Ghana’s Abeiku Jackson, today finished first in the Men's 100m Butterfly Heats 2, but could not progress to the semi-final at the Tokyo 2020 Olympic games.

He is now ranked 45th in the world in the event.
16 swimmers from a pack of 55 were selected for the next phase of the competition which saw Caleb Dressel of the USA leading the heat in a time of 50.35 secs. Sun Jiajun of china was the last best swimmer to qualify in 50. 74 seconds.

Abeiku was cheered on by a few Ghanaians who watched the event live at the Tokyo Aquatics Centre, the newly constructed facility in the Tatsumi-no-Mori Seaside Park and they were content with his achievement of a personal and national record.

16 years old Unilez Takyi will be the other Ghanaian swimmer to compete in the Women’s 50 meters Freestyle on Friday.

President of Ghana Swimming, Mrs Delphina Quaye who watched the swimming events expressed her satisfaction with the performance of Jackson.

She prayed that the government of Ghana will one day build an aquatic facility to support kids who love the sport.

Miss Farida Iddriss, an International Technical Officer (ITO) in swimming said the performance of Jackson has put Ghana on the world map of swimming.

Chef de Mission of Team Ghana, Mr Mike Aggrey noted that it is time Ghana gets serious with disciplines like swimming which some nations take advantage of to win more medals at the Olympic Games.