Europa League round of 32 wrap up: Napoli crash out to Granada as AC Milan scrape past Red Star Belgrade 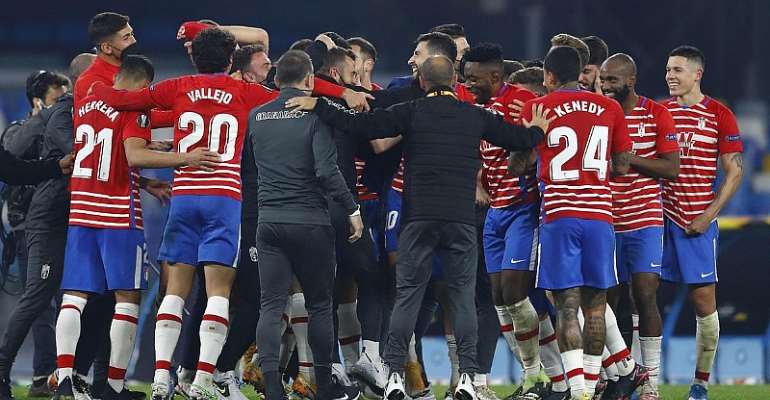 Players of Granada CF celebrate after winning the UEFA Europa League Round of 32 match between SSC Napoli and Granada CF on February 25, 2021 in Naples, Italy. Image credit: Getty Images

Napoli are the biggest name to crash out of the Europa League after failing to overcome a 2-0 first-leg loss to Granada in Italy.

Gennaro Gattuso's side started with intent, equalising on aggregate within three minutes of the off, but they were soon pegged back by Angel Montoro's strike.

Equalising on the night left Napoli needing three more to get an aggregate win but they could only muster one of the required strikes, through Fabian Ruiz.

Elsewhere, Ajax secured their passage to the next round thanks to a 2-1 victory over Lille in Amsterdam, sealing a 4-2 aggregate win.

Davy Klaassen and David Neres scored the crucial goals for the hosts either side of Yusuf Yazici's 78th-minute penalty as the French side briefly threatened a comeback which would have forced extra time.

The surprise of the night came in Germany as Molde scored with two of their only three shots on goal to beat Hoffenheim.

The first leg had been a thrilling 3-3 draw and the Bundesliga side dominated possession and chances in the return game, only to be undone by two Eirik Ulland Andersen efforts.

Unai Emery's hopes of winning this competition once more continue with two goals from Gerard Moreno giving his Villarreal side a 2-1 win (4-1 on aggregate) over RB Salzburg, who had briefly led through Mergim Berisha.

Perhaps the best entertainment of the night came at Ibrox, where Rangers sealed progression with a 5-2 win over Antwerp, following on from their 4-3 triumph in Belgium a week ago.

Incredibly, the score had been just 1-1 at half-time with Alfredo Morelos' goal cancelled out by Lior Refaelov on the half-hour mark. Shortly after the break, Nathan Patterson and Ryan Kent put the Scots in a strong position but Didier Lamkel Ze gave the Belgians hope of an unlikely comeback, which were soon extinguished by Borna Barisic and Cedric Itten's late goals, which both came from the spot.

Finally, Shakhtar Donetsk have reached the last 16, with Junior Moraes' penalty sealing a 1-0 (3-0 on aggregate) win over Maccabi Tel-Aviv.

In the later kick-offs, there was no shortage of further drama.

AC Milan were given a huge scare when Red Star Belgrade came to San Siro, despite recording a 2-2 draw in Serbia last week to put them in a commanding position.

Franck Kessie's penalty gave the hosts the lead but they were soon pegged back by Ben. Red Star were reduced to 10 men by Marko Gobeljic's red card 20 minutes from time but the Serie A title hopefuls were left clinging on to an away goals win.

Bayer Leverkusen's run in the competition came to an end with Young Boys' 2-0 win in Germany sealing a 6-3 aggregate triumph, while PSV have also been sent packing with Ahmed Mahgoub netting late against Olympiacos.

Dynamo Kiev sealed progression on the road, with Vitaliy Buyalskyi scoring late to seal a 2-1 aggregate victory over Club Brugge, who would have progressed on away goals otherwise.

There was no such drama in Rome, where Roma's 3-1 win over Braga confirmed a 5-1 aggregate triumph, while Dinamo Zagreb are through thanks to a 1-0 win over Krasnodar to follow on from their victory in Russia a week ago.