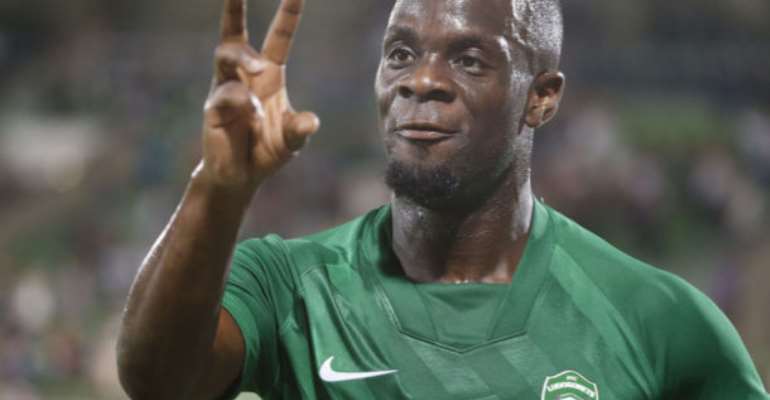 Striker Elvis Manu bagged a hat-trick on Thursday night but it was not enough to save his Ludogorets Razgrad outfit from suffering a 3-4 defeat to LASK Linz in the Uefa Europa League.

The Dutch-born attacker who is of Ghanaian descent earned a starting role for the Bulgarian club today when they made the trip to the Linzer Stadion to face their opponent in Group J.

In a game that produced a lot of action, Elvis Manu starred and won the match ball after netting a sensational hat-trick.

The former Feyenoord attacker scored his first goal in the 15th minute when LASK Linz had taken a 2 goal lead.

Later in the second half when Ludogorets was trailing 4-1, Elvis Manu displayed lethal form in front of goal in a bid to inspire a comeback for the Bulgarian giants.

He netted his second with an assist from Alex Santana in the 62nd minute before stepping up to convert a penalty kick in the 74th minute.

Despite the outstanding performance from Elvis Manu, LASK Linz still cruised to a 4-3 win against Ludogorets.

Having lasted the entire duration of today’s encounter, the Ghanaian earned the highest rating [9.2] from Modernghana Sports partners SofaScore.

Detailed match stats of the forward against LASK Linz below:

On the matchday, Petar Filipovic, Andreas Gruber, and Marko Raguz scored for LASK Linz in the first half before Husein Balic netted the eventual decisive equalizer in the second half.