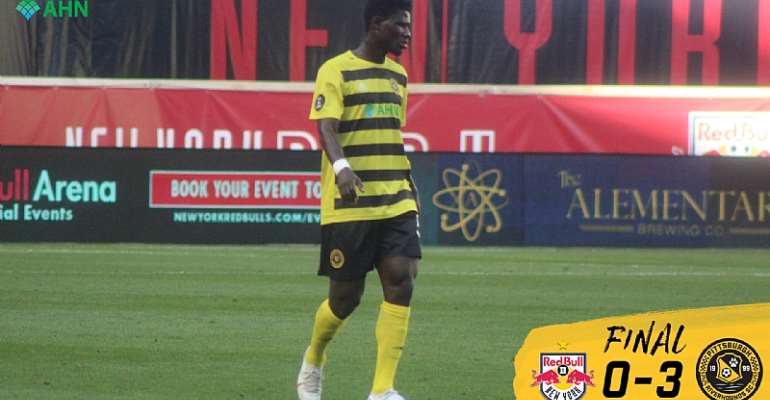 Youngster Ropapa Mensah scored on Saturday night to inspire his Pittsburgh Riverhounds SC side to an emphatic 3-0 win against New York Red Bulls II in the USL Championship.

The Ghanaian international has been in form since the 2020 football season in the USA resumed after the Coronavirus break and continues to be a key man for his team.

In a Matchday 12 encounter against New York Red Bulls II staged at the Red Bull Arena, Ropapa Mensah was handed a starting role for Pittsburgh Riverhounds SC and unsurprisingly did not disappoint.

Following a good first half displayed, the 23-year old striker scored with a fine effort in added time after he was assisted by Raymond Lee to send his team into the break with a deserved lead.

In the second half, an own goal from Preston Kilwien plus an equalizer from Robbie Mertz completed a 3-0 win for Pittsburgh Riverhounds SC as they run away with all 3 points from the away match.

Ropapa Mensah on the matchday lasted 62 minutes of play before making way for Albert Dikwa. The former Inter Allies FC forward finished with a high rating of 7.1 from Modernghana Sports statistics providers, SofaScore.

With his goal on Saturday, the attacker has now netted 4 times and provided 2 assists in the ongoing 2020 USL Championship season.