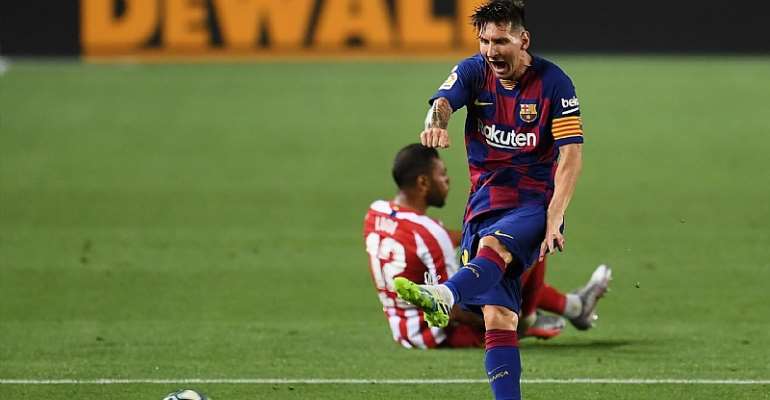 Three penalty kicks were scored in a back-and-forth contest at the Camp Nou which saw Barcelona lose further ground in the Spanish title race with a 2-2 draw against Atletico Madrid.

Quique Setien’s side came into the game on the back of another 2-2 draw away to Celta Vigo on Saturday, a result that gave Real Madrid the initiative at the top of La Liga, but were unable to make amends, dropping more points here.

Things looked good for the Catalans early on, with Barca taking the lead after just 12 minutes when Diego Costa inadvertently diverted a Lionel Messi corner kick into his own net.

Costa was then presented with a shot at redemption just minutes later but had a penalty kick saved. Marc-Andre Ter Stegen was adjudged to have strayed off his line, though, and Saul Niguez converted the retake to restore parity.

Barca took the lead once more with a penalty of their own, awarded after Nelson Semedo was fouled by Felipe. Messi scored a ‘Panenka’ chip down the middle to make it 2-1, but the hosts’ joy was once again short-lived.

A third penalty was controversially awarded when Semedo felled Yannick Carrasco despite the Belgian appearing to trip himself. For the second time, Saul converted to put Atletico Madrid back on level terms.

The draw leaves Barcelona one point short of Real Madrid at the top of La Liga with Zinedine Zidane’s side now presented with the chance to go four points clear with a win over Athletic Club on Thursday night.

The point for Atletico Madrid, however, tightens their grip on a Champions League place.