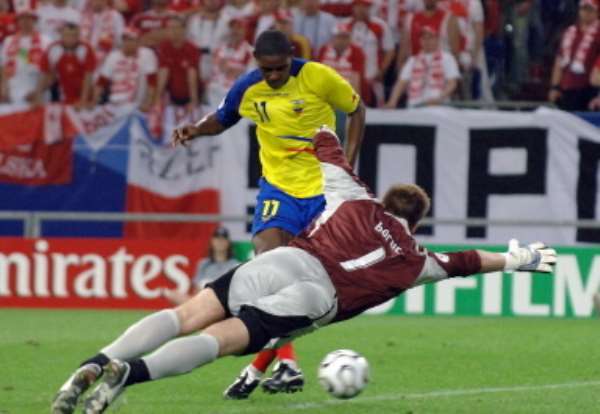 Luis Suarez's Ecuador side began their 2006 FIFA World Cup™ campaign with a convincing 2-0 win over Poland in Gelsenkirchen on Friday, 9 June 2006.
A hard-fought encounter witnessed goals either side of half-time for La Tri. Carlos Tenorio profited from Agustin Delgado's flicked header in the 24th minute to give the South Americans the lead.

With ten minutes of normal time remaining, the provider turned goalscorer as Delgado side-footed home from close range to put Ecuador second in the Group A table behind Germany on goal difference.

The match:
5': The balmy late spring conditions in Gelsenkirchen contrasted with those in Barcelona where the teams met in a friendly last year just ahead of the Final Draw for Germany 2006. On that evening, a torrential downpour did not prevent Poland from scoring a convincing 3-0 victory. However, Ecuador began this first competitive fixture between the nations brightly and Luis Valencia had the first attempt, screwing a 20 yarder wide of the target.

11': It was a fast opening with the excitement generated by the teams' colourful and boisterous followings adding to the tempo. While Ecuador goalkeeper Cristian Mora's painted face caught the eye, Artur Boruc was the busier of the two keepers. The Celtic custodian had to be alert to stop a speculative 30-yard volley from Segundo Castillo.

24': Chances were few and far between but just as it appeared the game would become a midfield battle, the South Americans struck in a straightforward fashion. Ulises de la Cruz hurled in a long throw from the right, Agustin Delgado provided the flick-on and Tenorio, reading the move to perfection, raced in to guide his header into the far corner of the net. (0-1)

29': On top now, Ecuador almost doubled their lead with a copycat move. De la Cruz threw the ball in, Tenorio, this time at the near post, muscled his way to the goal-line and cut the ball back but Delgado, six yards out, could not keep his effort down.

38': Boruc was called into action twice in four minutes as Ecuador refused to sit on their lead. He kept out a thunderous 35-yard free-kick from Edison Mendez before holding on well to Valencia's effort from the right-hand side of the box.

Plenty of spirit:
46' The legions of Polish supporters that had travelled across Germany for the game saw their team dominate possession at the beginning of the second half but they were getting no joy from an Ecuadorian defence prepared to throw their bodies into every challenge.

62':Now playing on the break, La Tri almost grabbed the second goal. Delgado turned neatly on the edge of the box, raced towards goal before tumbling under the challenge of Mariusz Jop. The referee waved play on as the hearts of Polish fans skipped a beat.

73': Pawel Janas' men were unable to create a clear-cut opening while the sights of Ecuador's forwards were set firmly between the goalposts. Another Mendez effort from distance forced Boruc into more action as the game became increasingly stretched.

80':The South Americans doubled their advantage with a devastating move. Mendez split the Polish defence with an inch-perfect pass, substitute Ivan Kaviedes, unselfishly, drew Boruc before squaring to Delgado, who, completely unmarked, side-footed the ball into the empty net.

86': With the clock ticking down, Poland twice came within a whisker of halving the deficit. First Ireneusz Jelen saw his left-foot snapshot strike the bar, then another substitute, Pawel Brozek, watched agonisingly as his curling effort from the right edge of the box crashed off the post to safety.

In conclusion:
Learning from their debut at the FIFA World Cup four years ago, Ecuador produced a highly efficient team performance to deservedly take the three points in their opening game. Poland, more direct and anxious, will need to improve if they are to take something from their eagerly awaited fixture against hosts Germany.