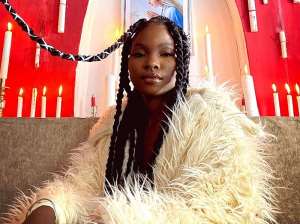 Aristokrat Records' newest signee, Ria Sean known for her smash single 'Lemonade' is set to re-introduce herself to the world in a powerful way, with a brand-new audio and video 'Moneybag', in partnership with the number one cinema brand which boasts the largest cinema screen in Nigeria, IMAX.

Gloria Asene Enebi popularly known as Ria Sean, a singer and songwriter signed jointly to Aristokrat Records and Island Def Jam Recordings was born and raised in Nigeria. Ria grew up singing in the church choir and professionally embarked on her music journey when she was 16 years old.

Drawing influences from artists such as Brandy, Chris Brown, Whitney Houston, and Frank Ocean, Ria Sean’s sound is a fusion of Afropop, R&B with Lo-Fi undertones. Featured on the compilation album: “Sounds from The Basement Gig – Vol“ and having worked with artists like Leriq, Adekunle Gold, Moelogo and Goodgirl LA, this vivacious Afripop artiste has an exciting treat for her music lovers with the IMAX's ultra-modern facilities and sophisticated theatre style which will host five lucky fans, blockbuster-style, in an exclusive premiere of 'Moneybag'; a move for this dynamite of a singer to build her fan community, engagement and connection. To be part of the 5 lucky fans who will have the golden opportunity to attend the premiere of the 'Moneybag' music video, all you have to do is follow Ria Sean's Instagram page and leave your email address in the comment section.

Prior to the soon-to-be-released audio/visual of "Moneybag" on Thursday, August 5, 2021, Ria Sean's fanbase has grown exponentially, especially after releasing an 8-track self-titled EP in 2017 which boasted of great songs like ‘Fa Ko Si’, ‘Spring' and ‘Selfish’.