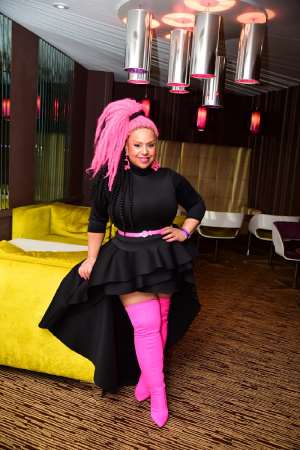 Miss-K was one of the VIPs who graced the red carpet of “ Just one Blood ” movie premiere, this past weekend. Making this moment her first red carpet appearance in two years.

She surprised everyone by attending the latest Nollywood blockbuster, Directed by Teco Benson, featuring Nollywood Icon, Zack Orji and Actor Mofe Duncan, which took place in London, at the eve of the Royal Wedding.

After, a temporary lapse of silence, away from the lights, cameras, glitz and glam, Afro-Caribbean-Latina Artist, Miss-K, seem to be back in full force.This time, she shone as bright as the neon street lights, as her striking glamorous outfit and neon pink hair got everyone’s attention.

She was seen socializing with the cast of the movie, and friends, including other Nollywood royalty, Hon. Desmond O. Elliott, Film Director & President Producers Guild of UK Malcom Benson, and CANUK Chairman Dr.Boma Douglas and his wife, just to name a few.

Her stylish fashion sense caught the eyes of everyone, so much so that it was carefully captured by the lens of Excellepro and African Glitz Magazine while at the event,and for that, we must say that she deserves some accolades.

Certainly these past few days have been a double celebratory time for Miss-K, as not only she has had her birthday, additionally breaking her silence, by making a comeback on her social media platforms, just a little over 2 weeks ago, gifting her fans one of her numerous golden gifts, by unveiling the cover of her up-coming book, titled: “POWERFUL BEAUTY: Breaking barriers with Kurls, Kurves and Konfidence”, doing so exactly on the 23rd of April 2018, to mark the United Nations International book & copyright day, which she aims to release later this summer.

As for the reason why Miss-K took such a long break away from the Media world, not accepting interviews and going ON and OFF her social Media Platforms, Miss-K promises the media, it will all be revealed exclusively very soon.

2023 Budget: Any bill that comes before parliament will go t...
38 minutes ago