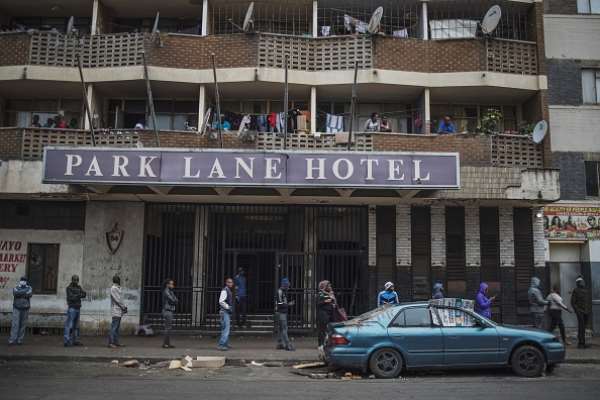 What strategy should South Africa follow to contain the outbreak of the SARS-CoV-2 virus after the current 35-day lockdown ? Any strategy should be informed by the trajectory of the disease, the effectiveness – or otherwise – of the current lockdown and how the particularities of the country will interact with the virus. These include high levels of HIV infections and the complexities of social distancing in lower-income neighbourhoods .

It must also be informed by economic considerations as these have their own, real impact on public health. South Africa has this far relied exclusively on epidemiological criteria for ending the lockdown.

What is clear is that the lockdown has an extremely high economic cost . The country should be looking to alternatives that will be less costly and also more effective in the long term at protecting its communities, its health system and its economy.

We have developed a model that draws on the experiences of other countries, particularly South Korea . We argue that South Africa needs to urgently prioritise its mass testing and contact tracing capacity, which gives it the best chance of saving the nation's health and economy.

The cost of this programme, even at its most expensive, would be a tiny fraction of the costs of a prolonged lockdown. The South Korean programme had the benefit of attacking the epidemic when it was still small and containable. South Africa retains this advantage over the worst hit European countries. The question now is how to effectively use the time under lockdown to ensure that it is able to contain the spread of SARS-Cov-2, manage the health risks and minimise the economic costs.

The implementation of the country-wide lockdown on 27 March 2020 was timeous and necessary . It bought the country valuable time to increase its testing and contact tracing capacity, and to prepare its health system. But South Africa's initial response to the emergent epidemic in Wuhan, China, in January 2020 was similar to much of the rest of the world – watchful waiting but, with hindsight, perhaps insufficient contingency planning.

South Korea is a notable exception. Due to its experience of the MERS outbreak in 2015 , it was better prepared . Instead of embarking on a total lockdown, the country had a more nuanced approach by enforcing, with citizen buy-in, extensive social distancing coupled with scaling up of other preventative and precautionary measures.

Crucially, at the centre of that strategy is aggressive screening for the SARS-CoV-2 infection and isolation of infected individuals, and the tracing and quarantining of their contacts. This enabled South Korea to keep a substantial proportion of its economy open. It did, however, rapidly close its borders , thereby minimising imported infections.

Mass testing and contact tracing work best when the epidemic is still at a relatively low level. This is because the reproduction rate of the disease, often referred to as R or Ro, is so high that a country needs only to be off guard for around two weeks before effective public health intervention options seriously narrow.

Roughly speaking, the R for SARS-CoV-2 is estimated to be about 2.5 every four days . That is, one person infected by the virus infects approximately another 2.5 people over a period of four days. That may not appear fast – but at that rate everyone in this country will get infected within the space of a couple of months, if no prevention to reduce this infection rate is implemented.

Where transmission of the virus becomes widespread, at the community level, the scale of the infections severely limits the effectiveness of mass testing and contact tracing. This is because the infected population is so widespread and growing all the time, while many of those infected are asymptomatic – by some estimates up to 80% .

The only option then is to drag the infection rate down to manageable levels by severely limiting the movements of the population for a period of up to two to three months – a generalised and long-term lockdown.

South Africa's saving grace is that it implemented the lockdown at a much earlier stage of the epidemic than many other countries. At that point most new infections were those who had returned from international travel and at the time it seemed that community-based infections were confined to the affluent population.

As the country then did not have the capacity to undertake mass testing and contact tracing, precious time was bought with a lockdown that was gradually scaled up. But it came at a very high economic cost.

We have developed a COVID-19 intervention model which is able to analyse some possibilities for the course of the epidemic, and to assess possible responses and costs. Models are a useful and effective tool (although of course not infallible), under conditions of uncertainty, for providing us with an informed and systematic way to compare the impact of a range of policy interventions.

We estimate that if South Africa were to rely exclusively on lockdowns to keep the epidemic under control during 2020, approximately 192 days of lockdown would be required, divided into three episodes. This is because the epidemic is likely to resurge the moment any lockdown is removed unless there are strong public health interventions in place. These interventions include testing at scale, isolation of infectious cases, and high levels of tracing and quarantine of their close contacts.

The cost of lockdown

Given that the lockdown effectively closes down both the supply and demand sides of the economy, the loss of gross domestic product (GDP) is nearly complete – by our estimates roughly R13 billion per day . Over 192 days, the loss of GDP is of the order of R2.5 trillion – almost 50% of GDP.

The lockdown strategy will clearly lead to an economic collapse of a magnitude that will impact health, lives and livelihoods. This is why it is so important that the next stage in the country's COVID-19 strategy is informed by both health and economic considerations because the two are so tightly intertwined. It would be a grave mistake to rely only on epidemiological factors and ignore the looming economic catastrophe and its dire impact on public health.

Read more: South Africa needs to end the lockdown: here's a blueprint for its replacement

Our projections are based on South Korea's successful prevention strategy of mass testing and contact tracing. Early evidence shows this is also working in Hong Kong. If successful, this strategy reduces the probability of having to resort to repeated and extended generalised lockdowns. Lockdowns would only need to be implemented selectively if localised outbreaks were identified and could be contained.

The opening of the economy would, however, still be subject to:

It would also require very careful systems and support to manage risk and spread within health care facilities.

At the South Korean levels of testing of around 17,000 per day, the annual cost of this strategy would be around R5 billion. At 36,000 a day (the Department of Health target for 30 April), this grows to R10.5 billion. At the target set by the UK of 100,000 per day, the cost would be R29.2 billion per year. This is cheap if it is considered that these annual costs represent respectively 0.4, 0.8, and 2.2 times the single-day cost of a lockdown.

A programme of mass testing and contact tracing is challenging, particularly in the South African context. The persistence of spatial apartheid, and a large number of multigenerational households, and concerns about our state's capacity, mean that South Africa faces a number of challenges not present in South Korea.

Despite these risks, South Africa cannot afford to embark on a strategy of extended periodic lockdowns. It is critical that the capacity for mass testing and contact tracing is in place prior to the end of this lockdown. The country's health system must be given every support to ensure its success.

David Francis works at the Southern Centre for Inequality Studies which receives funding from international foundations that fund research.

Alex van den Heever, Lucy Allais, Martin Veller, Michael Sachs, and Shabir Madhi do not work for, consult, own shares in or receive funding from any company or organisation that would benefit from this article, and have disclosed no relevant affiliations beyond their academic appointment.

By Alex van den Heever, Chair of Social Security Systems Administration and Management Studies, Adjunct Professor in the School of Governance, University of the Witwatersrand And

David Francis, Deputy Director at the Southern Centre for Inequality Studies, University of the Witwatersrand And

Imraan Valodia, Dean of the Faculty of Commerce, Law and Management, and Head of the Southern Centre for Inequality Studies, University of the Witwatersrand And

Lucy Allais, Professor of Philosophy, University of the Witwatersrand And

Martin Veller, Dean of the Faculty of Health Sciences, University of the Witwatersrand And

Michael Sachs, Adjunct Professor, University of the Witwatersrand And

Shabir Madhi, Professor of Vaccinology and Director of the MRC Respiratory and Meningeal Pathogens Research Unit, University of the Witwatersrand

More Article
ModernGhana Links
Ghanaian farmers are becoming impoverished under Akufo Addo and Bawumia government; Check The Records
Prayers, Preparation, Patience, Praises, and PEACE: Introduction to the 5ps of Life for the 21st Century’s Peace
The Use Of Advertising Appeal In Breast Cancer Awareness Month
﻿#EndSARS: Memorialization or Fanfarization?
Thoughts Of A Nima Boy: Ayisha Abdallah Asks, ‘Ever Held The Hands Of The Sick, The Old, Bedridden Or Dying Person?
Open letter to celebrities: Celebrity lifestyles and mental illness: The case of Funny Face
International Day of the Girl Child: The need to promote the development of the Girl Child
A Critical Perspective Evaluating The Cpp
The Reality Of Party Factions And Power Blocs!
TOP STORIES