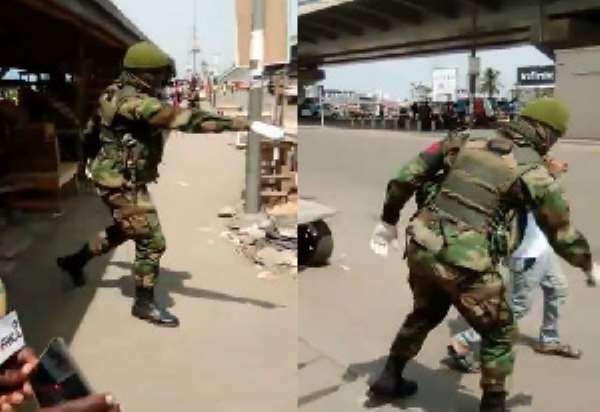 The District Chief Executive of Techiman North in the Bono East Region Hon Peter Mensah is appealing to the Security Agencies to exhibit maximum professionalism as part of efforts to enforce the restrictions imposed by the president Nana Addo Dankwa Akufu Addo the resident in Accra in Kumasi.

According to Hon Peter Mensah, in fighting the COVID-19 pandemic, government isn't seeking to worsen the conditions of citizens by unleashing violence on them.

Speaking to OTECNEWS Hon Peter Mensah emphasized that the security agency must not intend to terrorize the citizenry. According to him, it is not a combat operation but humanitarian adding that “It is a humanitarian operation; not a war. They should not intimidate anybody aimed at achieving the overall objective of the President of Ghana”.

The Techiman North DCE is therefore asking the public to cooperate with the outfit in its quest to ensure the effectiveness of the lockdown restrictions.

The lockdown which affects Accra, Tema and Kumasi will last for two weeks.

The decision, according to the President is to help curb the spread of COVID-19 which has led to four deaths and infected some 162 people.

“Prevailing circumstances mean that stricter measures have to be put in place to contain and halt the spread of the virus within our country, especially in Accra, Tema, Kasoa and Kumasi, which have been identified by the Ghana Health Service as the ‘hotspots’ of the infections. In doing this, we cannot afford to copy blindly, and do all the things some other well-developed countries are doing. There is no one-size-fits-all approach to this pandemic. We have a unique situation in our country, and we must take it into account in dealing with the disease, whilst meeting all the six (6) key WHO guidelines on the most effective ways of combating the pandemic. Even though it may be said that the number of our infections is still, relatively, low, if we act now purposefully, we have a chance of preventing an escalation of our numbers,” the President said.

Residents in the Kumasi Metropolis and its environs will remember Monday March 30, 2020, as a day on which indiscipline attitudes were met with radical responses from personnel of the Ghana Army during the turn of the metropolis for disinfection of markets there in the wake of the spread of the coronavirus disease to the country.

The soldier who was part of the military deployed to enforce law and order during the period of the partial lockdown, was seen in a video, instructing the civilian to move onto the main road to do the jumps as punishment for attempting to video the security team.

Hon Peter Mensah’s concerns
But Hon Peter Mensah, said President Akufo-Addo did he mention that he has given power to the military or police to use brute force on citizens', the Ashanti Regional Chairman of the New Patriotic Party has said.

He therefore called on the various heads of the security to address the content of the videos going round that suggest that their personnel are ready to beat citizens who flout the directives of the President.

He added that "The police can arrest people who flout laws. But people should first understand what the President said and shouldn't misinterpret it. The banks and other people offering essential services can all go to work."

He added that "The police can arrest people who flout laws. But people should first understand what the President said and shouldn't misinterpret it. The banks and other people offering essential services can all go to work."

Anti-gay bill : Tell foreign missions if they provoke us we'...
57 minutes ago