In defense of Captain Smart: Let’s Not Throw Away The Baby With The Bathwater. 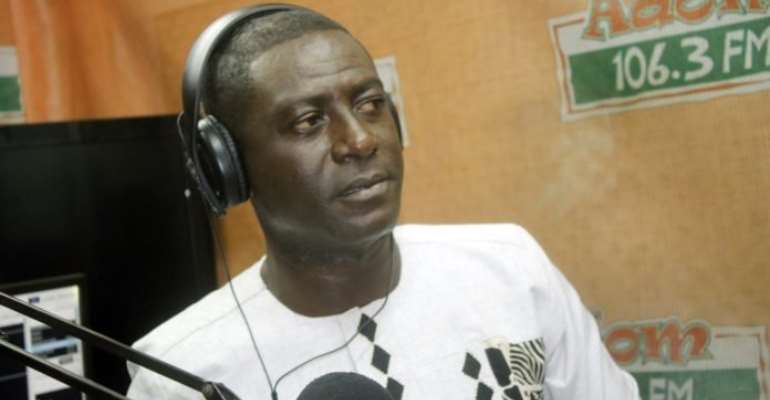 Attention has been most recently and nationally drawn to the fleeting rate of exchange of Ghana’s Cedi (GHS) by the Radio Show Host commonly known as Captain Smart, and unfortunately, many of us have been hammering him for doing so, citing his perceived vacillation in digging into the sides of NPP and NDC, the two most powerful Political Parties.

To most neutral-minded Journalists and Independent members of the Electorate, that wouldn’t be so bad at all. After all, Journalists are largely expected to be impartial and objective in their efforts to inform the general Public of what is happening in our societies and the Nation. It may just be coincidental, but unfortunate, that a particular side of the Aisle may get more of a Journalist’s criticism than the other. But even in the case there is a certain indication of a Journalist’s preferential concentration of criticism of a particular side, would it not serve us all best to critically and vigorously assess the content of his or her reportage, instead of simply ignoring him or her, or taking him or her to the cleaners? Without an educated, honest analysis of what is reported, we would be missing an opportunity to address an issue vital to the Nation’s advancement.

Captain Smart may not be a darling Journalist of many a Political supporter of the current Regime, but what he just pointed out regarding the GHS must not be tossed into the dustbin of Public discourse by any conscientious Ghanaian, including supporters of Nana Akufo-Addo’s Government, because it strikes at the very core of the Nation’s Economic and Social wellbeing.

So, while I’d not attempt to deny the possibility of this issue affecting the fate of the incumbent Government in the 2020 Elections, I’d encourage all Ghanaians to set aside the sheer political implications of what Captain Smart said regarding any promises Dr. Bawumia, the Vice President, made, prior to the2016 Elections that brought NPP to Power, and rather, focus on the real import of the issue at stake.

However, the average Ghanaian who does not routinely assess these financial swings does not seem to notice. We have all come to accept such huge devaluations as some formal, usual thing to expect, or see in our system. But we should not accept that as a norm to live by. Every Currency in the World fluctuates in value over a period. Nevertheless, if any Currency persistently races downhill to the degree as the GHS has, over the past 3 years, every user of that Money as his or her primary instrument of business transaction, ought to be concerned and wonder if its managers really have any effective concerted efforts to stabilize it. If People cannot see any reversal or lasting brakes in the trend, they tend to lose confidence in it, and resort to dealing in other Currencies of more stable and stronger values.

Such devaluation woefully disrupts our Economy and puts enormous financial stress on the Medium and Small Business entities, and eventually all Citizens. Meanwhile, the large fluctuations in value erode gains accrued on investments over the period. As a practical example, if someone acquired some revenue of, say, $1000.00 in 2016, and changed it into GHS in Ghana to be saved at the Bank, that customer would have had GHS 4230.00 in deposit, at most. Assuming the Bank did not offer any interests on the savings, that amount would be worth only $739.50, today, if converted back to Dollars. In order to maintain the same parity in exchange, the customer’s bank would have to offer a cumulative interest of 35.5% over the same period in the face of this devaluation. And, we all know that no bank exists in Ghana that would ever, even in booming times, offer any interests on savings that would result in such gains over the same period.

If we would remember, it was a devaluation of Ghana’s Currency by a ‘meager’ 30.00% that triggered the Coup which toppled Dr. Busia’s Regime in 1969. And, the current devaluation is well above that: 35.5%. The common benefit of devaluation, we are told by the Economists, is making our goods cheaper to overseas buyers who when attracted by the lower prices might buy more of our goods. However, if we are not producing in large enough quantities to take advantage of the greater Demand, we end up losing on both ends of the equation. It is only when we produce more that we could sell a lot to increase our overall gross revenues. Meanwhile, the prices for all goods we buy from overseas rise astronomically and we lose our purchasing power. In Dr. Busia’s era, the Government could not help generate enough productivity to offset the effects of the devaluation, and a huge stress reared its head on the Economy. Did we learn our lessons from that era? Are we producing more, now, to meet the expectation of benefiting from the devaluation with more exports? And, if we are producing more, are our overseas customers really expanding their purchases from us to help us meet that expectation?

Captain Smart might have ruffled some feathers among the NPP when he took Dr. Bawumia to task on this issue. But we must admit that he hit on a crucial point of grave national import to us all. Is he wrong to question what Dr. Bawumia has done or is doing to ensure we don’t end up short of the expectation from the devaluation to be short-changed, (punt intended)? I guess not. The VP assured us of a vibrant Economy under the watch of his Administration, when he bedazzled many of us with some exquisite algorithmic Economic Calculus broken down to our humble level. But it seems like the positive effect on the Economy is eluding us. Maybe, someone forgot to apply the formula the VP worked out for us. Is it wrong for Captain Smart to call his attention to that? I don’t think so.

I’d be remised to leave out of this crucial discussion a laudable contribution on Social Media by a fellow Ghanaian in diaspora who goes by the pseudonym of OYOKOBA. He quizzed Captain Smart why he and all of us would be so attached to foreign goods, and wonder why our Currency does not stabilize. Oyokoba suggested a solution that had, some 50 years ago, been also suggested by the late General Kutu Acheampong: That Ghanaians ought to produce more of what they eat and eat more of what they produce. The Concept was dubbed “Operation Feed Yourself”.

Rather unfortunately, Ghanaians, even though knew it was a good idea, did not abide by that advice for long. Many did not even take heed to him because Gen. Acheampong’s Regime had overseen unprecedented corruption that had pervasively eaten into every fabric of the Ghanaian society, leading to total crippling of the Economy. That level of corruption is what was termed as “KALABULE”. Almost every conceivable item that was sold in stores under that corrupt system was rationed and under controlled price Regime. People had to stay in long lines on end to buy a packet of Sugar or half-dozen Sardines or half-piece of Cloth, or half-bar of Carbolic Soap, popularly called Key Soap. We could not bear the cynicism of Kutu’s message, as he and his lieutenants were believed to be flagrantly exchanging VW Golf cars with young ladies for amorous and sexual company. That is how the jocular term in Akan, “Fa wo to begye Golf” (‘Come exchange your buttocks for Golf’, a literal translation) was born.

Ghanaians were so peeved by this irony that we threw away the Baby with the Bathwater. Had we managed to be a little more patient to sift the seeds from the chaff, and followed the good advice Kutu gave, then, Ghana would have long traversed this quagmire of Economic and Social aggravation.

In order not to let our frustration get the better of us, we must pull together with firm but wise entreaties to the incumbent Regime and appeal to Dr. Bawumia to honor his promise to us all, NPP or NDC or CPP or PPP or PNP or Independents. And, I hope the good enterprising Economic guru would wield his magic to let good times roll in. And, if the VP would do so in time, wouldn’t Captain Smart have done us all a great favor deserving of commendation instead of the call for his hide?