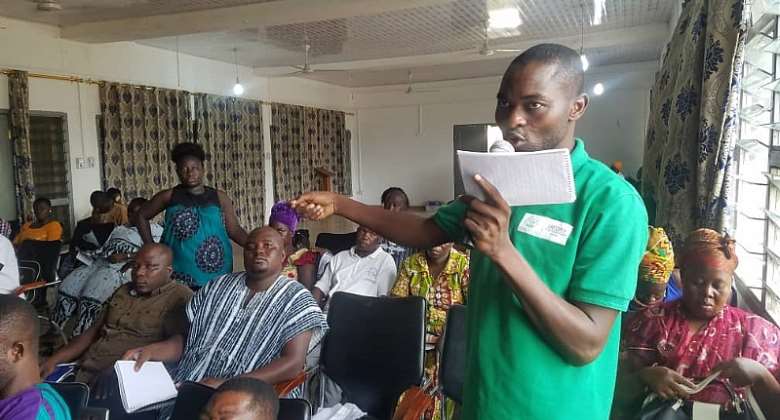 The Director of ORGIIS, Mr. Julius Awaregya, making inputs at clean energy forum in Paga of the Kassena-Nankana West District

According to World Health Organization (WHO), more than 3.8 million people globally die prematurely each year from indoor air pollution, caused by using solid fuels such as wood, animal dung, charcoal, crop wastes and coal for cooking and heating.

Aside the above, sources from same report further indicates that apart from sixty percent of those who die being women and girls, girls also spend up to 18 hours a week on average in gathering fuel in households that cook with solid fuel.

Additionally, according to Global Alliance for Clean Cookstoves, globally some three (3) billion people in the world have no access to clean cooking solutions.

The smoke from such traditional cooking systems contribute to a wide ranges of chronic illnesses and acute health impacts such as stroke, lung cancer and other respiratory illnesses with women especially pregnant women and children being the most affected.

Additionally 2010 statistics available at the Renewable Energy Unit of the Ministry of Energy indicates that the five regions of the north are the most affected when it comes to fuel wood consumption with the Northern Region leading with 78 per cent, Upper West Region -75 per cent and Upper East Region 62 per cent respectively.

All of these are likely to affect the attainment of the SDGs if pragmatic measures are not taking now to adopt clean cooking.

One of the pragmatic measures that could be adopted to fast-track the attainment of the SDGs is Clean Cocking. Clean cooking can contribute to an enabling environment for achieving the entire Agenda 2030 and directly deliver across ten of the SDGs.

Despite the above mentioned revealing statistics about the effects of using solid fuels for cooking ,it is very shocking to realize that apart from the Kassena-Nankana Municipal, Kassena-Nankana West District in the Upper East Region and two others in the Greater Accra region which have mainstreamed Clean Cooking into their Medium Term Development Plans(MTDPs) with funding and technical support from the Netherlands Development Organization, SNV and the Organization for Indigenous Initiatives and Sustainability (ORGIIS-Ghana), an environment focused Non-Governmental Organization and the Ghana Alliance for Clean Cookstoves and Fuels (GHACCO) , almost all the Metropolitan, Municipal and District Assemblies (MMDAs) in the country particularly those in Northern Ghana where the phenomenon is so serious have failed to mainstream Clean Cocking into their MTDPs.

My checks as a Journalist also indicates that most of the MMDAs rather focus their attention on Rural Electrification Project at the expense of promoting improved cooking stoves solutions and subsidizing the cost of LPG and its accessories. The works committees of the MMDAs are not informed of the energy needs of the citizens as more than 56 per cent of final energy is used for cooking and heating.

“Years past issues of clean cooking were not incorporated into our plans but now with funding support from Netherlands Development Organization (SNV) and ORGIIS-Ghana , we have now incorporated clean cooking into our Annual Action Plan and Medium Term Development Plan2018-2021”, indicated the Development Planning Officer of the Kassena-Nankana Municipality, Mr Idrissu Andani, during Accountability Workshop on Clean Cooking Initiative organized at Navrongo in the Kassena-Nankana Municipality on Friday.

He continuous, “As a result of ORGIIS-Ghana intervention, there is now increased awareness of clean cooking issues in the Municipality. Assembly Members and staff of the Municipal Assembly are now better positioned to serve as community change agents”.

He stated that apart from the NGO intervention leading to the Assembly also forming Clean Energy Sub-committee at the Assembly level, families are now moving away from rudimentary cook stoves to clean cooking technologies with the improved cooking stove supplied at subsidized cost to some women groups by ORGIIS-Ghana with support from Navrongo Health Research Centre and the University of Colarodo.

“Clean cooking issues are now discussed at Sub-Committee meetings, Executive Committee meeting and at the General Assembly sessions. The Assembly is also developing a clean cooking strategy to address problems resulting from traditional cooking methods in the Municipality with technical and funding support from ORGII-Ghana and the SNV”, he indicated.

There is no doubt that the SDGs, adopted by the 193 nations in 2015, is a major step towards addressing poverty, inequality, and climate change over the next 15 years. As the global community including Ghana work towards implementing these goals, it is very significant to invest in pragmatic solutions that have the greatest potentials in tackling the root causes of poverty, inequality, climate change, economically inclusive, cross-cutting impacts.

As highlighted earlier on in this piece, one of the pragmatic measures that could be adopted to fast-track the attainment of the SDGs is Clean Cocking. Clean cooking can contribute to an enabling environment for achieving the entire Agenda 2030 and directly deliver across ten of the SDGs.

One may ask how can clean cooking help fast-track the attainment of the SDGs? For instance the Goal three of the SDGs talks about Good Health and Well-being. There is no doubt that the reduction of smoke emissions from cooking decreases the burden of disease associated with household, air pollution and improves the well-being of the households particularly women and children.

Besides, Goal four deals with Quality Education. Many children, particularly the girl-child is often kept out of school because they have to travel for far distances in search of fuel wood for cooking in households thereby either going to school late or absenting themselves from school hence affecting quality education.

The Goal five, talks about Gender Equality. Unpaid work, including collecting fuel and cooking, remain a major cause of gender inequality. With the empowerment of women with clean energy cooking tools particularly making the items affordable and available would help address Gender Equality and help accelerate the attainment of the Goals.

Goal thirteen talks of climate action. Up to 25 per cent of black carbon emissions come from burning solid fuels for household energy needs. Clean cooking solutions address the most basic needs of the poor, while also delivering climate benefits.

Additionally, the Goal fifteen lays more emphasis on Life and Land. Research had shown that up to 34 per cent of fuel wood harvested is unsustainable, contributing to forest degradation, deforestation, and climate change.

Viewing the importance role clean cooking plays to the attainment of the SDGs, there is the urgent need for the Ministry of Local Government and Rural Development (MLGRD) to ensure that the rest of the MMDAs in the country mainstream clean cocking into their MTDPs and also support communities with LPGs and improved cocked stoves.

Speaking to the Ghana Times, the Executive Director of ORGIIS, Mr Julius Awaregya explained that it was against this background that his outfit with funding from SNV, the Netherlands Development Organization, was implementing the ‘Voice for Change Partnership Project, targeting the Kassena-Nankana Municipal and Kassena-Nankana West District in the Region at ensuring they mainstream cleaner energy components including LPG and other improved cooking stoves into their MTDPs.

On his part , the Senior Programme Officer of ORGIIS-Ghana, Mr Clifford Amoah Adagenera, who blamed the problem partly to the lack of access to affordable and efficient energy systems like LPG and improved cook stoves , stated that due to the availability of the product in the Greater Accra Region, 35% per cent of consumers in the area used fuel wood and charcoal as resources of cooking energy as compared to the 62% for Upper East.

He stated that the problem in the Northern Regions would continue to worsen if pragmatic measures are not adopted to address the issue and re-emphasized the need for MLGRD to ensure that the remaining MMDAs mainstream clean energy into their MTDPs and to implement the strategies.

In conclusion, to quote from the Coordinator of ORGIIS, Mr. Awaregya ,“ any Assembly that would want to be seen supporting the country to achieve the SDGs would not hesitate to attach the importance of energy cooking into its systems”