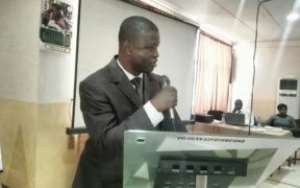 According to the World Health Organization (WHO), Universal Health Coverage (UHC) includes equity in access to health services. Thus everyone who needs health services should get them and not only those who can pay for them. Whilst It also insists that quality of health services should be good enough to improve the health of those receiving them, WHO also stresses that people should be protected against financial-risk of ensuring that the cost of using services does not put people at risk of financial harm.

It is very imperative to note that UHC is firmly rooted in the WHO constitution of 1948 declaring health as a fundamental human right and on the Health for All agenda set by the Alma Ata declaration in 1978.

It is equally important to recognize that the UHC also cuts across all of the health-related Sustainable Development Goals (SDGs) and brings hope of better health and protection for the world’s poorest.

It is very paramount to note that the UHC which is expected to be met by the year 2030 cannot be attained on a silver platter and requires very pragmatic approach to achieve that result.

Among some of the pragmatic and proactive measures that could be used to help accelerate the achievement of the set targets of the UHC by the year 2030 is the current model being prosecuted by the Upper East Regional Directorate of the National Health Authority(NHA) .

The Regional Directorate being headed by a very dynamic and a visionary leader, Mr Sebastian Alagpulinsa , has initiated a number of resulted oriented programmes and policies, geared toward fast-racking the attainment of the UHC which in my opinion as Professional Journalist should be a model for all the remaining 16 regions in the country to adopt to help Ghana make a significant mark in achieving the UHC by the projected year.

First and foremost, the Regional Directorate had worked hard to ensure that the Chiefs and other opinion leaders in the region who command respect and custodians of the people become very instrumental in the identification and registration of the indigent groups in the communities across the region with the support of the Department of Social Welfare.

Additionally, the management of the Regional Directorate has tasked all 15 Municipal and District Schemes to partner with the Ghana Health Service(GHS) to identify and register mental and Tuberculosis patients to ensure that no patient is left out as demanded by the UHC.

Aside the above, all the 15 Municipal and District Schemes have been made to work in collaboration with the Associations of Persons with Disabilities(PWDs) to identify and enroll their members as means of achieving the objective of the UHC which states that nobody should be left out in accessing healthcare because of one’s social or economic status.

Furthermore, all the District Offices of the Scheme are vigorously embarking on effective institutional and market registration and sensitization on the application of the mobile renewal solution as a result of the directive received from the Regional Directorate of the Authority.

Besides, one of the interesting strategies put in place by the Regional Directorate of the Authority which interests me most as a Journalist is the dawn and evening van announcements, radio discussions as well as the use of Live Presenter Mentions (LPMs) on the relevance and the application of the mobile renewal solution to deliver on membership drive. This in no doubt is one of the surest ways of achieving the UHC and must be replicated by the other regions.

In furtherance, through the directive received by the Regional Director and his Lieutenants, all the Municipal and the District Directors of the Scheme have embarked upon vigorous school and institutional registration and also educating the schools and the institutions on the use of the mobile renewal solution. In the case of the schools both students of the Junior and Senior High schools are targeted, especially those on the School Feeding Programme.

Another remarkable advancement initiated by the Regional Directorate of the Authority is the engagement with the Department of Social Welfare to ensure that all the Livelihood Empowerment against Poverty (LEAP) beneficiaries’ are encouraged in obtaining the National Health Insurance (NHIS) cards during the payment of their stipend in their various communities.

“The daily routine education on the mobile renewal is ongoing in all the district across the region. In some districts, the electoral areas are clustered based on the numbers of communities located in the area for community durbars to be held for sensitization and education on membership renewal through the mobile solution”, the Regional Director disclosed.

Again, Community based organizations such as dress makers, hair dressers, farmer groups, women groups, youth groups and micro-finance groups are now patronizing the scheme highly as a result of the well thought-out mobile solution education programme embarked upon by the Authority.

“All these measures that the regional team put in place across all the District Offices are clear manifestation of our efforts to deliver on our dream as the first region to achieve Universal Health Coverage.”, the Regional Director stressed.

It very important to share with you the general public that as result of the above mentioned interventions , the region has started making some significant in-roads toward achieving the UHC.

At the just-ended 2019 Mid-Year Performance Review Meeting of the Authority held in Bolgatanga, the Regional Director , mentioned that all the interventions initiated by the Regional Directorate was making the scheme more robust and results oriented towards achieving the UHC.

The Regional Director also indicated that the mobile renewal solution was also well patronized in the region, and announced that out of the target of 98,460 to be enrolled via the mobile renewal system, 107,363 members renewed their cards using the system, representing 109 per cent.

The Regional Director indicated that the achieved indicators could contribute to the attainment of the UHC, stressing “ I have no doubt that the pragmatic policies and programmes being pursued by the directorate, is going to make the Upper East Region to become the topmost of the 16 regions in the country to achieve the UHC by the year 2030”,

Mr Alagpulinsa who attributed the success story chalked by the region to the effective management of the new Chief Executive of the Authority, Dr Baaba Dsane Selby, said under her able leadership all hospitals in the region and elsewhere has been reimbursed their claims up to August including health centres and CHPS compounds.

Whilst calling on stakeholders to continue to support the Scheme contribute affectively towards fast -tracking the attainment of the UHC, the Regional Director underscored the need for policy reforms and amendments of the NHIS Act 2012 to make the membership of the scheme compulsory, as in the case of Korea, so as to speed up the agenda to achieve the UHC in Ghana.

Stakeholders including the heads of departments drawn from the Regional and District Directorates of GHS , Ghana Education, Social Welfare, the GSFP, Representatives of Private Providers Association and Christian Health Providers Association of Ghana, District and Municipal Managers and staff of the Authority, applauded the Regional Director and his Lieutenants for initiating such innovation to help achieve the UHC.

The UE Regional Director of the NH IA, Mr Sebastian Alagpulinsa, with some of the Municipal and District Directors of the Scheme after UHC programme