The Bongo District: The Centre Of Investment Opportunities In Ghana 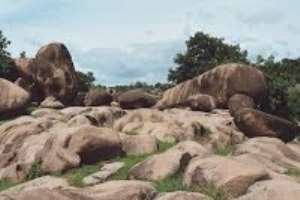 Historically Background of Bongo
The Bongo District, located in the Upper East Region is one of the 254 Metropolitan, Municipal and District Assemblies (MMDAs) in Ghana. It very important to stress that the District was created by Legislative Instrument (LI) 1446 in 1988 with Bongo as its capital. The District which lies within the Oncho-cerciasis-freed zone also shares boundaries with Burkina Faso to the north, Kassena-Nankana Municipal to the west, Bolgatanga Municipal to the south west and Nabdam District to south east. It is equally important to note that the District also forms part of the 15 of Municipalities and Districts in the Upper East Region.

The small town of Bongo and its environs are littered with rocks which occupy almost a third of the total land space. The rocks are sedimentary and have been there since creation; spectacular and breathtaking, one on top of the other.

Mission
As Professional and a Veteran Journalist before I could explore to find out what the District has for national and international investors, I decided to ask about the Mission and the Vision of the Bongo District Assembly from the District Chief Executive(DCE) for the area, Mr Peter Ayamga Ayinbisa and he revealed to me that the Assembly’s vision is “ to work towards eradicating endemic poverty by creating a conducive atmosphere for behavioural and attitudinal change particularly among the unemployed youth to stem the tide of rural-urban migration”.

Investment Opportunities
One would have thought that with its environs littered with so many rocks occupying almost a third of the total land mark of the area, the Bongo District would have nothing good left for the people in the area to help improve upon their economic status. But that is not the case.

Clay Deposits
Research conducted in the District had revealed that there is large deposits of clay in commercial quantities that could be exploited for the making of tiles for building projects. Fortunately for the Bongo District, the commodity is in high demand as people from the region have to depend on traders of tiles from the southern parts of the country to be transported to the Region for sales at high cost.

“As I speak to you now the lead investigator is to lead us to an investor in Kumasi who had expressed much interest to invest in the area of the large deposits of clay in the District. There are also lot houses and hotels springing up in the region who are in need of tiles and the District Assembly hopes to cash on these opportunities to help initiate more development projects in the District to make life more comfortable for the citizens”, Mr Ayinbisa stressed.

Another investment opportunity that investors could support the Bongo District Assembly to tap for the overall development of the District is also the large deposits of gold in the area. Currently a Chinese Company is conducting mineral exploration in the area and when discovered fully could help boost the Internal Generated Revenue of the Assembly and also generate employment for the teaming youth including the informal sector.

Aside the above investment opportunity, the District is occupied by large quantities of rocks stretching from the north to south and west to east parts of the District. The road sector is in high needs of these raw materials for construction. The District stands to benefit enormously from the blessing of this raw material bestowed to it by God. The only thing that needs to be done is for the Assembly to look for very good investors and to sign a Memorandum of Understanding with such investors to help tap the raw material for the development of the area.

The Weaving Industry
Furthermore, other significant investment areas in the District that investors could explore are the basket, smock, batik, tie and dye industries. The basket and the smocks , apart from being sold nationally , they are also exported to the international market for sales to earn foreign exchange. But one of the major challenges confronting these two sectors is on how to add value to the weaving of these products to attract good markets. It is therefore very important for investors who would be interested in these sectors to consider building the capacity of the weavers in the area of value addition.

The Sheanut Industry
Additionally, the District is endowed with sheanuts where many of the women who are into sheanut butter processing do so manually. In fact the drudgery they go through in exploiting and processing the sheanut butter is very difficult and worrisome. What these women need importantly is to get process plant and given capacity building in the area of sheabutter extraction. This would help empower them to add more value to the processing of the raw materials to enable them attract good sales from the national and the international markets where the commodity is high demand.

Tourist Attraction sites
The name Bongo came about as a result of the discovery of a large but harmless python that patrolled the town at night. It was believed to be a god of protection. The word python in Mamprusi is “bohugu” and in Gurune Language ” bahine”, interpreted by Europeans who had difficulty with pronunciation, as Bongo.

The Bongo is also endowed with significant sites of interest. There are for example, the rocky hills called Apusariga and Azuruo. These formed the defense wall of the ancestors of the natives of the area. It is very important to mention that Bongo area was once occupied by Busansis who were later driven away by the Mamprusis who later settled there. Within the hills are many caves and crevices which gave much needed hideouts. At Apusariga there is the grave of the first chief and founder of Bongo as well as the stone on which he sat to perform his duties.

The very first settlement area of the Mamprusi warriors is Abongin. From here they organized and drove away the Busansis by the use of fire torches at night. Today, this is celebrated annually as an ancestral fire festival known as ‘Azambene’. Another site of interest is Abeneba, a restricted shrine in Adaboya inhabited by a sacred tiger. Here, all the enskined Bongo chiefs are washed and purified before entering Bongo. All the above mentioned tourist sites when supported by investors to be revamped , would help boost the revenue generation of the Assembly as well as help create jobs for the people.

Apart from the fact that the Bongo District is endowed with a lot of investment potentials, it is also well noted for its high calibre of human resource. Perhaps what is lacking is the needed support to help unlock the potentials in the District to help accelerate the development of the area and the present Government’s policy of one District one factory and one dam one village has come at the right time.

The DCE and his team had also worked hard to make the District one of the most peaceful areas in the region which is very suitable for investment opportunities. In fact through the able leadership provided by the DCE, the District had been awarded as the most peaceful District in the region. Based on this a lot programmes which are even supposed to be organized at Bolgatanga, the regional capital of the Upper East Region are shifted to the Bongo District. Many development partners are also implementing programmes and projects in the District all as a result of its peaceful nature.

In conclusion, it is very important for any investor who would want to invest in the country to consider investing in the Bongo District of the Upper East Region as the DCE had assured that tax components would be made more flexible for such investors. The area is very virgin for investment opportunities and every investor must take the opportunity of this to conduct business in the District.