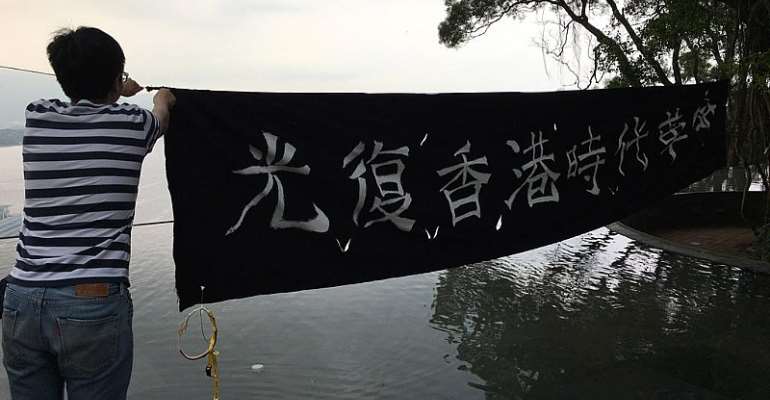 Hong Kong protesters using radical action against the police have grabbed the headlines, using “Retake Hong Kong” as their key slogan. They believe a hardline approach is the best way to get Beijing's attention. RFI met one of them at his university campus in Hong Kong.

Mike, 22, agreed to speak to RFI's Aabla Jounaidi on condition his name be changed because of security concerns.

When he realised that peaceful protests were not enough to sway Hong Kong's chief executive, Carrie Lam, Mike said he joined the group of protesters who adopted radical actions against the authorities.

They are young, wear total black and are known as the frontliners.

To Lam these are violent rioters bent on destroying the city's economy. To China's ruling Communist Party, their actions are "the first signs of terrorism."

The frontliners adopted more hardline tactics against the police, such as throwing bricks at them, pelting police headquarters with eggs, trashing the Legislative Council, and even blocking a tunnel under the harbour.

Mike was arrested on 28 July during clashes with the police at the Chinese government's Liaison Office in Hong Kong.

“That day was just like any other day. We grabbed some water and we went to the front line of the clashes. There was tear gas coming out, I lost my friends and got arrested,” he recalled.

Biased justice
Mike said police beat him with batons and he spent two days in hospital before being discharged.

Along with 45 other frontliners, he is facing rioting charges that carry a jail sentence of up to 10 years. He feels they should have faced lesser charges such as “unlawful assembly”.

“In Yuen Long on the 21st of July, the police did not come to the scene where triads were beating up citizens,” Mike said.

“The triads used excessive violence in North Point and Tsuen Wan. Yet, none of the triads, filmed by reporters and caught by citizens, have ever been charged.”

Mike feels that the Hong Kong Department of Justice is biased in favour of the assailants in white shirts. He said that around 20 of them were arrested on 21 July but none of them faced any charges.

Demands
Aside from seeking the resignation of Carrie Lam, the demonstrators have five demands, including the complete withdrawal of the extradition bill, which has now been granted, as Carrie Lam announced on 20 August that "the bill is dead".

The demonstrators have also demanded a halt to the descriptions of protests as "rioting", a waiver of charges against those arrested, resumption of political reform, and an independent inquiry into the police violence.

On 20 August, Lam said an existing watchdog, the Independent Police Complaints Council (IPCC), would hire overseas experts to help carry out a “fact-finding study” to investigate the incidents in recent months, including an attack by armed thugs at the Yuen Long metro station in July, which left dozens injured.

She said she expected a report to be completed within six months.

Lam added that she will "immediately" set up a platform for dialogue with citizens, "from all walks of life" and different political background.

“If all of the five demands are [met], it will [lead] to a new political system and we [will] have made history,” Mike declared.

An independent Hong Kong
The independence of Hong Kong is a dream he covets even if he is "not sure about that.”

“The only way out is the independence of Hong Kong. The Chinese government has treated Hong Kong very badly. I don't think I can fight for my freedom under the strong control of the Communist Party,” Mike said.

He quickly added that most people in Hong Kong do not share his views for an independent Hong Kong and would rather keep good ties with China mainly for economic reasons.

“Most people think that we cannot leave China [because] we depend on China. They think that Hong Kong is not that important and is a small place," he said.

"Actually, the international community cares about the unique position of Hong Kong. [It is] a unique place, with unique history and a unique cultural background. It is a strong financial power. We should not think that we are small,” Mike added.

Mike was born in 1997, the same year the United Kingdom handed Hong Kong back to mainland China. In 2047, the 'one party, two systems' agreement which gives Hong Kong a degree of autonomy will expire. Mike will be 50 years old then.

He said that even if he is quite certain he will find work as a computer engineer, he is not sure about wanting to live in Hong Kong without freedom.

"I can't see a happy future. I am not satisfied with the shrinking freedom in Hong Kong," Mike said.

It's a disgrace for NDC to celebrate 29 years of empty resul...
27 minutes ago