Chinese media warn that the end is near for Hong Kong 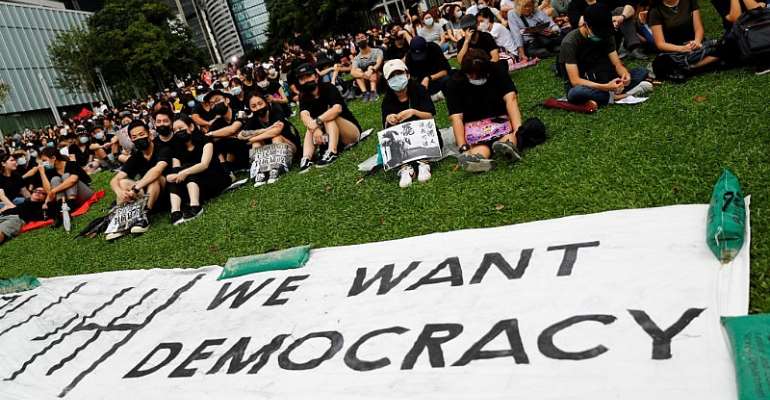 Thousands Hong Kong students dressed in black have rallied at the start of a two-week boycott of university classes in a continuation of a massive anti-government movement opposed to government plans to allow extraditions to China. An editorial by China's state news agency warns that all may soon be over.

“The end is coming for those attempting to disrupt Hong Kong and antagonise China,” according to Beijing-controlled Xinhua News Agency in a commentary called “Violence Must End Now.

There are "three bottom lines that must not be crossed,” states the agency. They are, harming national security, challenging the “power of the central authorities” and the questioning the “authority of the Basic Law.” Apart from that, threatens Xinhua, “no one should use Hong Kong to infiltrate and undermine the mainland.”

The ominous tone can mean that “that in Beijing's view the movement is going to die out,” says Jean Pierre Cabestan, a political science professor with Baptist University in Hong Kong.

“And that gradually the students will come back to class and the movement is going to come to an end.

“But the other possibility is that eventually the People's Liberation Army or the armed police will intervene and take control of the city.

“And that's of course a much more worrisome outcome for the movement which has a lot of international implications as far as Hong Kong citizens are concerned, but also as far as the foreign community in Hong Kong is concerned."

Beijing's aggressive tone reveals its deepest fear: that Hong Kong will somehow serve as a basis for an attack on Beijing's communist system. Blaming unnamed “patrons” who are alleged to be manipulating the protesters, Beijing fears that the cherished “one country, two systems” principle might be compromised before the “colour revolution” spreads to the mainland – referring to the 2003 “rose revolution” in Georgia, the 2004 “orange revolution” in the Ukraine and others that caused dictatorial regimes to be replaced by democracy.

The images have deepened anger against the police, who protesters accuse of brutality.

Hong Kong's Security Minister described the violence as "on the verge of being out of control".

But Hong Kong police stress that they “respects all citizens' right to assembly and to express their opinion freely,” going as far as sending letters to news media. In a 26 August letter to The Wall Street Journal published by the official Hong Kong police website,

Chief Superintendent of Police Tse Chun-Chung justified police actions by saying that “it is clear that demonstrations in the past couple of weeks have turned into violent protests. Rioters have hijacked public order events and exploited them to commit violent acts including assaulting police officers, attacking police stations and facilities.”

Since July, the police have felt it necessary to defend themselves on nine occasions against allegations of using excessive violence, while dismissing as “totally unfounded” rumours that members of the People's Liberation Army have been deployed as Hong Kong police.

Class boycotts
This week, thousands of students may take part in a class boycott.

Cabestan, whose Baptist University starts classes on 3 September, expects some empty schoolrooms. But he says that professors will teach.

“Even if only one students is showing up, the class will take place,” adding that universities have been given instructions “not to penalise students who have decided to boycott class for a while. But we'll make sure that the students who want to attend class will be able to do so.”

But he is unsure how long Hong Kong's population will be able to continue supporting the movement, saying that the “radicalisation and increasing number of violent actions may alienate people and decrease the support the movement has received from the very beginning.

But many still support the protests, he says, pointing out that after the airport was blocked, “quite a number of protesters were stuck near the airport. A lot of cars helped them to go back downtown, as there was no metro or other means of public transportation to move back to the city.

“It is a sign that the movement is still supported by some segments of the Hong Kong society."

Evacuation plans
In a worst-case scenario, he says, Beijing may stage a military intervention. In that case, “evacuation plans which have been drafted by the various consulates in Hong Kong are going to be carried out. It means that the US Seventh Fleet will come to pick up American nationals and evacuate them from Hong Kong."

Other foreign governments have evacuation plans as well.

Thai military spokesperson Pongsak Semachai was quoted by Bloomberg as saying that the Thai Air Force is ready to deploy a Lockheed C-130 Hercules and an Airbus A340 if the security situation in Hong Kong deteriorates and the Thai government orders an evacuation.

$50million gathered so far for the National Cathedral projec...
34 minutes ago