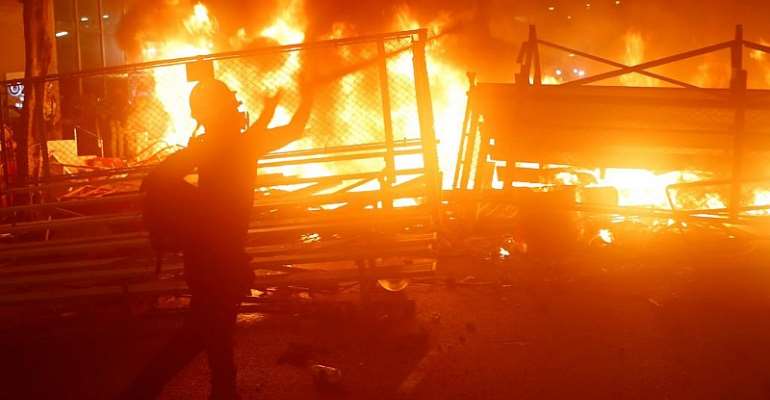 Pro-democracy supporters flouted a ban on street demonstrations on Saturday in Hong Kong on the 5th anniversary of the start of the 79-day Umbrella Movement. Police and demonstrators clashed outside a government building.

After a day of peaceful rallies and marches, on Saturday night, a small group of protesters set fire to a roadblock they'd erected near Hong Kong police headquarters in the central district of Wan Chai.

They used plastic bollards, metal fencing and seating from a nearby sports ground to build the barricade.

Outside the Hong Kong Parliament, Legislative Council, police fired tear gas and water cannons on protesters who threw fire bombs and stones at them.

The security forces prevented the protestors from breaking through the barrier in front of the LegCo building with high-powered jets of blue-cloured liquid. Local media reported that the coloured spray would make it easier to identify suspects.

Daytime demos peaceful
Tens of thousands of people had turned out for the 13th weekend straight to protest against the Hong Kong chief executive's compliance with the authorities in Beijing and to call for fuller democratic practice.

Police had banned any rallies this weekend due to violent clashes last week. Defying the ban, protestors blocked roads and chanted anti-government slogans.

One group's route took them past the official residence of Hong Kong's leader Carrie Lam while another group gathered in the Causeway Bay shopping district.

Friday round-up
The authorities had already taken other precautions on the eve of the anniversary.

Largely isolated
The world is watching, but only watching it seems. The European Union's foreign affairs commissioner Federica Mogherini said the developments are "extremely worrying".

However as the US readies to impose new tariffs on Chinese goods on Sunday, the US President Donald Trump is giving his administration credit for preventing harsher action from Beijing because of the economic pressure.

That said, the big country in the region, Australia, seems more concerned with long-term economic trade and the possible negative fall-out of Trump's sanctions than any effec they may have on Beijng's reactions to Hong Kong.

Standing firm on both sides
Five years after the Umbrella Movement, also known as the Occupy Central with Love and Peace Movement (OCLP) led by Benny Tai, Xi jing ping is ploughing ahead to bring Hong Kong more closely under the shade of Beijing's umbrella before 2047.

However, calls persist for Beijing to respect fundamental freedoms and the distinctness of Hong Kong until that time, as agreed under its mini-constitution, The Basic Law. Legal scholar Benny Tai, released on bail two weeks ago after serving about four months of a jail sentence for leading the Umbrella Movement and creating public disorder, said he, for one, would continue to march with Hong Kong people demanding democratic rights. Tai had gone on strike in prison on 5 August, for which he had been placed in solitary confinement.

RFI's correspondent Florence de Chagny talked to a 30 year-old pro-democracy campaigner who wishing to remain anonymous, conveyed his own committment. He said he'd given up his estate agent's job to work full time for the protest movement.

He added, "They won't give up because they think that the government has never and never will meet their demands. They say openly online that because Carrie Lam is stone-walling them, they will use whatever means they have. They'll fight till they die. They say it will go further, for them it's the last battle."

Why are Hong Kong people protesting
The 2014 Umbrella Movement was born out of anger and frustration at Beijing's decision to dash hopes of the Hong Kong leader ever being elected by universal suffrage and Hong Kong people, rather than being appointed by a pro-Beijing committee.

This year, the protests were sparked by Chief Executive Lam's bid to impose the extradition of convicted criminals to mainland China. Lam has shelved the proposal but not withdrawn it.

The past three months have seen more violence between police and protestors, and could be described as the worst crisis in Hong Kong since it returned to Chinese rule in 1997.