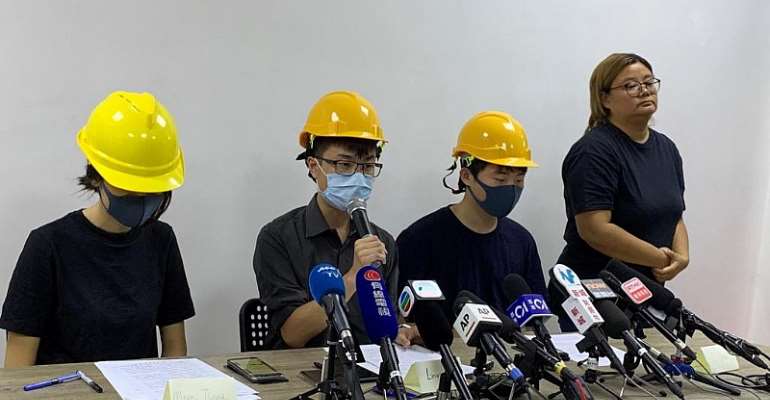 Hong Kong is facing its most severe situation since its handover from Britain in 1997, says the head of Beijing's cabinet office. The comment comes a day after three masked activists from Hong Kong's anti-government movement held a press conference condemning the city's pro-Beijing leaders.

Zhang Xiaoming, speaking to Hong Kong residents on Wednesday, said the government are considering what measures to take next.

"Hong Kong's crisis has continued for 60 days, and is getting worse and worse," he said.

Earlier, on Tuesday, two young men and one woman from the anti-government movement hid their identities with face masks and the movement's signature yellow construction helmets to deliver their press conference.

Tuesday's appearance was the first time protesters have delivered a statement in a formal setting, with most demonstrations organised through social media and messaging apps.

“This platform aims to act as a counterweight to the government's monopoly on the political discourse on the issue,” they said, adding they were not affiliated with any political group.

“We call on the government to return the power back to the people and address the demands of Hong Kong citizens,” said the protesters as they read out their statements in English and Cantonese.

“The current administration should be responsible for the public outcry but they have chosen to stay away from the responsibility,” they said.

Hundreds of lawyers dressed in black marched from the city's highest court to the justice secretary's office.

They are backing the protest movement's demand for an independent inquiry into law enforcement tactics but they also said they were marching against politically motivated prosecutions from the city's Department of Justice.

"They carry out prosecutions selectively, " senior counsel Anita Yip told AFP. "How would people still have confidence in the government?"

The Chinese city has been hit by two months of clashes between police and demonstrators in a big threat to Beijing's rule.

Hong Kong has rights unseen on the Chinese mainland, including an independent judiciary and freedom of speech.

Many believe those rights are being cut, which has led to a backlash from activists.

Hong Kong police have arrested more than 500 protesters and charged dozens with rioting -- which carries a maximum 10 years in jail.

But they have so far only arrested 19 men for last month's attacks on democracy protesters that hospitalised 45 people, and only on the less serious charge of unlawful assembly.