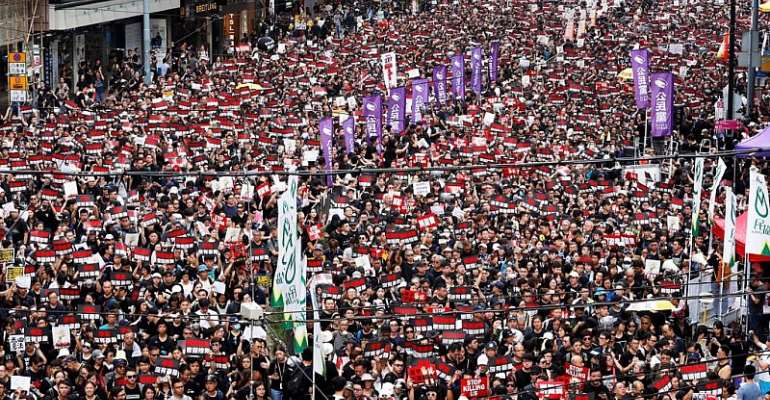 Hundreds of thousands people have again taken to the streets in Hong Kong, demanding the full retraction of a controversial extradition bill, a day after chief executive Carrie Lam announced the "indefinite suspension" of the motion.

Protesters chanted "Scrap the evil law!" as they marched through the streets to pile more pressure on Lam, who paused work on the hugely divisive bill Saturday after days of mounting pressure, saying she had misjudged the public mood.

Crowds of black-clad protesters were marching from a park on the main island to the city's parliament – a repeat of a massive demonstration a week earlier that organisers said more than a million people attended.

Critics fear the Beijing-backed law will tangle-up people in China's notoriously opaque and politicised courts and damage the city's reputation as a safe business hub.

The city was rocked by the worst political violence since its 1997 handover to China on Wednesday as tens of thousands of protesters were dispersed by riot police firing tear gas and rubber bullets.

Nearly 80 people were injured in this week's unrest, including 22 police officers, and one man died late Saturday when he fell from a building where he had been holding an hours-long anti-extradition protest.

He had unfurled a banner saying: "Entirely withdraw China extradition bill. We were not rioting. Released students and the injured".

Huge queues formed outside the high-end Pacific Place mall with flowers and written tributes piling up as demonstrators paid their respects.

Calls to quit
Lam stopped short of committing to permanently scrap the proposal Saturday and the concession was swiftly rejected by protest leaders, who called on her to resign, permanently shelve the bill and apologise for police tactics.

Suspending the bill has done little to defuse simmering public anger and protest organisers have called for a city-wide strike Monday as well as Sunday's rally.

Jimmy Sham, from the main protest group the Civil Human Rights Front, likened Lam's offer to a "knife" that had been plunged into the city.

"Carrie Lam's speech yesterday in no way calmed down public anger," he said.

Lam's decision to press ahead with tabling the bill for debate in the legislature on Wednesday – ignoring the record-breaking crowds three days earlier – triggered fresh protests, which brought key parts of the city to a standstill and led to violent clashes with police.

You disappointed Assin North MP, you abandoned him in court ...
31 minutes ago