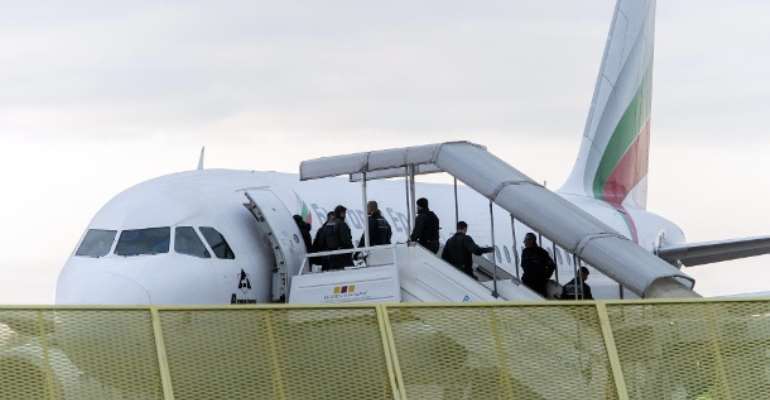 Not infrequently, the repatriation of rejected asylum seekers to their countries of origin fails. To curb this in the future, the EU wants to increase the pressure on affected Countries.

In the future, the EU wants to put more pressure on third countries when withdrawing rejected asylum seekers by issuing visas. As the EU member states decided on Thursday, in the future, if insufficient readiness to return are caused, "the processing of visa applications will be used as a lever". The EU can then decide whether to extend processing times, shorten visa validity, charge higher fees or cancel free visas for certain groups such as diplomats.

The changes are included in a revision of the European Visa Code. According to this, the EU Commission should assess the willingness of third countries to cooperate in withdrawing "irregular migrants" at least once a year. If a State does not cooperate, the Commission should propose to the Member States a decision on "specific restrictive measures" in the field of visas.

Conversely, cooperative countries should be rewarded. According to the EU Council, the EU Commission can then propose that the visa fee be lowered, the decision-making period shortened or the validity of multiple-entry visas extended.

The so-called visa lever goes back to an initiative of the former Federal Interior Minister Thomas de Maizière (CDU) from May 2017. At that time, the heads of state and government had called on the EU Commission to make better use of the leverage effect of the common visa policy in the deportation of illegal migrants.

In the following year, the Brussels authority then presented a corresponding legislative proposal. In the case of Bangladesh, this pressure has already been tested in a pilot project of the EU. According to diplomats, this led to a significant increase in readiness to return.

The majority of deportations from Germany could not be carried out last year. The reasons for this are diverse. Horst Seehofer calls the quota "unacceptable".

Of the 57,035 planned repatriations were 30,921 failed, a ministry spokesman said AFP. That corresponds to a share of a good 54 percent. Federal Interior Minister Horst Seehofer (CSU) called the quota unacceptable and announced countermeasures.

The past year had been the first in which the number of failed deportations exceeded those of successful, said the Ministry spokesman. According to the survey, around 25,673 deportations were processed in 2017, while 22,802 repatriation attempts failed.

Obstacles to deportations
In 2018, more than 27,000 foreigners destined for deportation were not handed over by the federal states as planned to the Federal Police, as Seehofer told Bild am Sonntag. The Federal Police carry out deportations. According to Seehofer, the reasons for the canceled handovers were that the persons concerned were "could not be found" or "did not have the necessary travel documents".

In addition, there are also people who "prevent their repatriation at the airport," said the minister. According to the "Bild am Sonntag", 3,220 repatriations were aborted last year following the transfer to the Federal Police and shortly before departure. The most common reason for this was "active passive resistance" of the deportees.

Seehofer commented on the statistics in the "Bild am Sonntag" with the words: "I can not tolerate that." He had already talked to Chancellor Angela Merkel about "having to turn it off quickly".

According to the Federal Ministry of the Interior, the number of departures in Germany was close to 236,000 at the turn of the year. Of these, the vast majority of 180,000 were tolerated. In about 75,000 cases, the reason for the toleration was that the necessary travel documents were missing. A further 70,000 cases are reported in the statistics as "tolerance for other reasons".

In principle, the amended Visa Code should make visa issuance easier in the future, but also more expensive. Legal travelers can submit their applications six months before travel, the form can be filled in electronically and signed. The fee for a visa is raised from 60 to 80 euros. The Code is expected to enter into force at the end of the year. It is valid six months after publication in the EU Official Journal.

'We’ll Kill Each Other' Comment Was A Conditional Statement...
20 minutes ago