'Our MCE Is Clean'—Presiding Member Reacts To Corruption Allegation 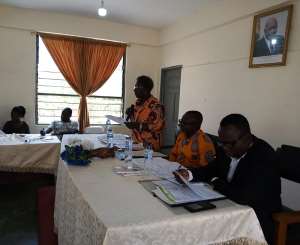 Misappropriation of funds allegations against the New Juaben North Municipal Chief Executive (MCE), Comfort Asante has been described as baseless and meritless.

According to the New Juaben North Municipal Assembly Presiding Member, Edward Asante Antwi, interim follow up on the allegation has proved there is no iota of truth in the news making rounds on social media.

The former MCE for New Juaben until its division is said to have misappropriated about GHc78,000.00 in a purported news item attributing it to the incumbent Presiding Member for New Juaben South, Michael Boadi Sarpong.

But reacting to the issue, Mr. Asante-Antwi said, investigations reveal the purported allegation is not coming from Mr. Boadi Sarpong as he has failed to come out to confirm nor deny the story.

"As a Presiding Member of this noble Assembly, I have followed with keen interest of allegation against our MCE but I must say it lacks merit and must not be given any attention. Hon. Boadi Sarpong has even failed to respond to request for explanation on the story but he seems silent on the issue" the PM disclosed.

Mr. Asante-Antwi also emphasized the PM for New Juaben South had ordered some Heads of Departments to account for some monies alleged to have been misappropriated but was not getting the expected results.

He, is, however optimistic the MCE has nothing to do with the said allegation as she (MCE) sometimes has to use her own money for the support of the Assembly's programs.