What Are The Signs Of The False Prophet Or So-Called Man Of God? 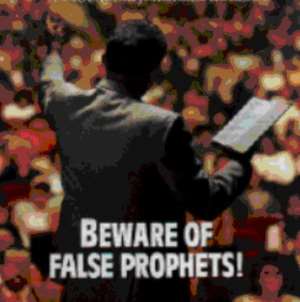 Christianity- the religion of people with a common belief in Jesus Christ- is saddled with unbelievable diversities to the point of bewilderment. Whilst the WORD is ONE, understanding differs at various levels and the teachers are as many as the interpretations. There are numerous people today who profess they had a calling to do the work of God. In their zeal, they enroll to take up theological courses or establish their own religious groups in order to live by their conviction. But are these claims of spiritual anointing by the ‘Men of God’ real? There is good reason to say, No! Otherwise the Lord would not have exalted us in Matthew 24:4-5 ‘And Jesus answered and said unto them, Take heed that no man deceive you. For many shall come in my name, saying, I am Christ and shall deceive many’. Matthew 24:11 ‘And many false prophets shall rise, and shall deceive many’.

The character of the false prophet is laid bare in the teaching of Jesus Christ in Matthew 23. Verses 4-7 pinpoint thus, For they bind heavy burdens and grievous to be borne, and lay them on men’s shoulders; but they themselves will not move them with one of their fingers. But all their works they do for to be seen of men: they make broad their phylacteries, and enlarge the borders of their garments, and love the uppermost rooms at feasts, and the chief seats in the synagogues, and greetings in the markets, and to be called of men, Rabbi, Rabbi. A very elaborate description is further given in Matter 23:11-33.

It is noteworthy that the temptation of Jesus Christ on His victorious return from the Wilderness is a more direct means of appreciating the use of spiritual gifts given by God in the service of humanity. The true man of God cannot claim ignorance of spiritual gifts and the laws regarding how they should be used. But this gift is explainable only to the point that it originates from God but the individual must work for it through love, forgiveness, service and diligence. It is not for just anybody by mere proclamation. We reap what we sow.

The first temptation is about changing stone to bread. Simply put, spiritual gifts should not be used selfishly. That is to say that the true man of God will not seek to derive personal gain from the use of the spiritual gift in the service of humanity. He will not benefit from its use. Period! Similarly, he can heal others but he cannot use the power to heal himself.

The second temptation was about Jesus Christ casting Himself from the pinnacle of the temple. This clearly refers to the spiritual law that the true man of God shall not make a public show of spiritual powers. In Matthew 24:24, we are cautioned thus, For there shall arise false Christs, and false prophets, and shall show great signs and wonders. Similarly, in Matthew 16:4 the Lord chastised the open display or public show of miracles in response to the demand of the Pharisees for a sign from heaven thus, A wicked and adulterous generation seeketh after a sign; and there shall no sign be given unto it, but the sign of the prophet Jonah.

The third temptation is a combination of the previous two with emphasis on how not to trade spiritual gifts for material things of this world. The true man of God does not seek to amass worldly things but lives in moderation. His spirit, soul and body see spiritually beyond the physical things. At that level he knows that the material things are reflections of the essence behind them and under no circumstance will he opt for the shadow instead of the substance.

The false prophet knows little about these spiritual laws and basks in the fleeting delusion of materiality and self-aggrandizement. It gets worse when the spiritual powers are not developed from within - the essence of Christianity. When borrowed from elementals and unseen forces, the false prophet has gone into a dangerous pact. These forces will do anything the false prophet demands on earth - Money? Houses? Passports and Visas? Spouses? Jobs? Charms? Just name it. For sure it will manifest - be it in a church room, consultation room, or wherever. But there is a great danger after the death of the false prophet. Depending on the nature of the pact, the unseen forces who served him whilst he was at his best on earth will now demand their pound of flesh- demanding and seizing the spirit of the poor false prophet to serve them. This action is an anomaly in the spiritual life of the dead. It is no fun because he will serve more than he was served and under more severe conditions. Mind you, death does not end it all. The unseen world of the earth planet in which the dead lives is more vibrant than the physical one here. Until our spiritual eyes are open we will have eyes but cannot see, have ears but cannot hear.

The true man of God develops the spiritual powers from within through love, service, forgiveness, diligence, and bearing the fruits of the spirit. Our Lord castigates such false prophets with the declaration that he does not know them even though they perform miracles and wonders in His name. Why? Because they have not developed their spiritual body - the power from within - and live by plagiarized spiritual powers. They cannot fly (like others who did not develop the spiritual body) and meet Him on His final return.

Why will some people fall prey to false prophets and ‘men of God’? It is all about levels of individual growth and development. Their being victims is but temporary; they will grow out of it. The scars will however, remain as lessons and greater will be their burden on the false prophet. It is important for all of us to be on high alert by being diligent since emotions will provide the false prophet ammunition to woo the innocent or ignorant person. Matthew 16:4 tells us; Then understood they how that he bade them not beware of the leaven of bread, but of the doctrine of the Pharisees and of the Sadducees.