The Story of My Life: Memoirs of An African Revolutionary 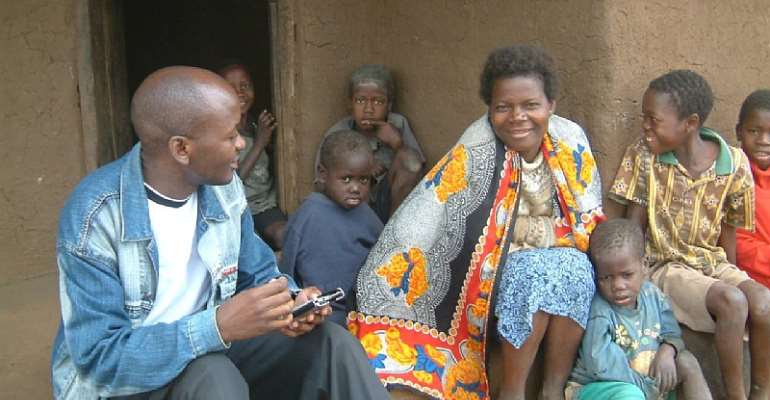 I dedicate this story to you my elders, disciples, followers and clients, including your descendants beyond 2119 who I am told will be living in stacked down apartments six hundred metres below the earth's surface, shopping in submerged oceanic-malls, vacationing on the moon or on mars and socialising with, or marrying, humanoids, while the super-rich will be entering a TpT Booth to enjoy the first experiences of human teleportation.

I was born on 25th May, 1974 in Namwera, a rural town of Mangochi District in Malawi, to a Yao-speaking father and Ndebele speaking mother, descending on my father's side from a royal family in the Yao nation. My father was a King who epitomized wisdom and throughout his life never trusted the colonial system of education. My mother was also a descendant of a royal family of the Ndebele nation in Bulawayo, Zimbabwe. Her name was Linah Dube. She was a medical doctor and registered nurse, the first crop of medical doctors and nurses trained by the federation government.

From 1981 to 1988 I attended the Lisandwa and Chankhanga Full Primary Schools in Kasungu (a district where the first head of state, Dr Hastings Kamuzu Banda came from), and was selected at first attempt to go and study at Malosa National Secondary School in Zomba (the colonial capital of Malawi), where I was between 1989 and 1993. My outstanding academic achievements at Malosa remain etched in the memories of my contemporaries. In 1993 I was selected to the prestigious Chancellor College of the University of Malawi to study for a Bachelor of Social Sciences.

In 1999 I left the University of Malawi a eurocentrically educated black with a slavery mindset. I then decided to embark on a journey to seek enlightenment. I gravitated towards knowledge. I travelled the world, met revolutionary icons, sat at the feet of wise men, drank from their cup of wisdom.

I became restless. I had so many questions that needed answers. Dr. Bakili Muluzi, Malawi's first democratically elected president, being the political engineer that he is, decided to pacify me by appointing me deputy ambassador to Libya. I declined the offer. I trekked back home to my village in search of knowledge. In Namwera Masongola I visited Senior Chief Jalasi and helped him with translation services for free. I sat at his feet and listened to him as he shared with me the history of the Yao people, government neglect and lack of political will to empower the people through local government. I listened to him as he poured out his heart to me.

My field work during my assignments at the United Nations, United Nations Volunteers, United Nations High Commissioner for Refugees, United Nations Development Program, World Food Programme, Voluntary Services Overseas, The Global Fund and GTZ also helped to open my eyes to the evils of capitalism. I saw with my own eyes how the IMF and World Bank have worked to entrench poverty and neoliberal slavery on the African continent.

I began to travel throughout Africa and I became acquainted with all of it. Except for the horn of Africa, I have visited, to some extent, all the other African countries. Because of the circumstances in which I traveled, first as a eurocentrically educated black and later as a student seeking enlightenment, I came into close contact with poverty, hunger and disease; with the inability to treat a child because of lack of money; with the stupefaction provoked by the continual hunger and punishment, to the point that a father can accept the loss of a son as an unimportant accident, as occurs often in the downtrodden classes of our African homeland. And I began to realize at that time that there were things that were almost as important to me as becoming a famous UN field worker or diplomat or making a significant contribution to the UN role of peace building: I wanted to help those people.

I went out to the lake, streams and rivers and spoke to the local fishermen, village women and department of fisheries officers. I listened to the rural women as they poured out their hearts to me. I learned more from these rural women than I would have learned sitting in a classroom reading books written by bourgeois feminists.

No capitalist bank in Malawi was willing to finance my expeditions. So I had no option but to sell off some of my assets. I approached Lucius Banda and he bought my deep freezers. The only people with hard cash at the time were civil servants working as accounts personel. I approached them. A senior accountant in the Ministry of Agriculture bought my Lilongwe house. I sold my Mark 11 to an accounts clerk working for the Treasury. With the cash I bought flight tickets and embarked on my mission.

After enduring so many years of painful isolation from my family and friends it pleased God to reward me with wisdom. God decided to use me to bring light and ubuntu back to a continent I love with all my heart.

I am self-taught. I never went to any ivy league or oxbridge. God is my tutor. But make no mistake. I am more enlightened than those who went to ivy league.

I am a living testimony of the liberating potential of Ubuntu education. The blinds obscuring my vision and chains of mental slavery were surgically removed and replaced with a hunger for knowledge and a propensity to gravitate towards light.

I am a new type of citizen, a citizen who submerges self in service of community. I do not subscribe to Social Darwinism, this so called 'survival of the fittest' bullshit. I am an indomitable lion and luminary for humanity. Incorruptible, indestructible.

I can be described as a man firmly embedded in the present but with an ever wakeful readiness to reflect on the past and a vision firmly set on the future.

Many people I have met including comrades have said to me that I must be very brave to write about what I write because of the risks it entails. The African Renaissance Project itself stands poised as a countervailing force against neoliberal slavery.

But in response, I have often said that it is not a matter of being brave but an avoidable burden of responsibility. I might have fears about the implications of attacking neoliberalism and spreading light on the African continent - the fears are real and the consequences dire - but my conscience never walks away. I wish it could, but it does not. It is always there, making the point that I have a responsibility that no one but me can now discharge.

In a capitalist world where those who receive the light of Ubuntu are dismissed as mad men and labeled lunatics it takes the spirit of selflessness to continue soldiering on while facing daunting challenges and insurmountable obstacles.

I am a Pan African revolutionary and decolonialist, the most powerful proponent of the African Liberation Movement today, as well as the foremost black political thinker of our time. I am a keynote speaker, social activist, theoretician and organizer of campaigns such as “The Curriculum Must Fall” and "Africa Unite".

Following in the footsteps of previous black leaders such as Marcus Garvey, Kwame Nkrumah, Mangaliso Sobukwe, Patrice Lumumba and Malcolm X, I point to a positive future for the African Continent through the slogan made famous by the Garvey Movement of the 1920s, “Africa for Africans, at home and abroad.” I send a bold message, calling on African people worldwide to unite their homeland, liberate their people and dispense with colonial borders that continue to divide and oppress.

My message to African leaders: “Unite and rally the Afrikan people behind the banner of Afrikan nationalism. Fight and defeat all forms of oppressive and exploitative rules, be it outright colonialism or neo-colonialism. Champion and promote the economic, cultural and spiritual interests of Afrikan people. Project the Afrikan personality in all aspects of life at all material times. Establish a democratic monolithic State of Afrika with one government, one military command, single economic market with one currency, and a common passport.

I believe strongly and sincerely that with the deep-rooted wisdom and dignity, the innate respect for human lives, the intense humanity that is our heritage, the African race, united under one federal government, will emerge not as just another world bloc to flaunt its wealth and strength, but as a Great Power whose greatness is indestructible because it is built not on fear, envy and suspicion, nor won at the expense of others, but founded on hope, trust, friendship and directed to the good of all mankind.