Your Letter To The UEW Governing Council Is Without Merit 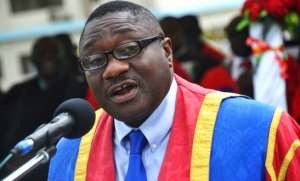 I have sighted a letter you have written to the chairman of the UEW governing council instructing him to prepare for the resumption of the two frustrated and miserable clients you failed to secure a favourable ruling for them when you took their monies to represent them in court in respect of their lawful dismissal from office on grounds that has never been challenged in any court.I need not to rehash the genesis of this issue because it is already in the public domain. The letter you wrote made a specific reference to the recent supreme court ruling that quashed the ruling of the high court that only pronounced your client guilty in default of defence.

Let me put it on record that, the said high court judgement was never enforced by anybody so seeking to rely on the very judgement that was never enforced to make a case at this material point in time defies logic and common sense. One would have thought that, since you have decided to anchore your letter on the recent supreme court case as reasonable grounds to get your client back to office, you would have quoted portions of the same judgement that declared actions connected to the high court judgement as null and void with no operative effect. Surprising you failed to do that to make a strong case.

Common sense should have "informed your very good self" that, if the supreme court had wanted to touch the decision of the governing council that got your client removed from office, the court would have started that clearly in a *consequential order by declaring their action as a nullity*. You failed to appreciate the fact that, the governing council of UEW never relied on the judgment of the high court but rather constituted a fact finding committee pursuant to section 7(2) of the UEW Act,2004( Act 672) to try your clients. The outcome of the committee's work was the removal of the VC and the FO

Some of us werent surprised when out of bad faith, Your senior, Prof.Raymond Atuguba after the supreme court ruling authored an article "purporting to suggest" that, the said ruling of the court actually pointed to the reinstatement of your client when in actual fact that wasnt the case. Later when he realised that he was going to be put to shame for misreporting in that regard, he denied ever putting that in the public domain through Justice Srem Sai.

As a lawyer and at your age, you failed to appreciate the fact that, the UEW governing council decision was not the subject matter before the supreme court but rather the high court judgement which was never enfored. I was baffled when you indicated in your letter that, as at the time the committee was constituted, your clients werent officers of UEW because the high court ruling declared their appointment(s) as void and for that matter, they couldnt have been asked to appear before the fact finding committee.

It is instructive to note that, because the high court judgement wasnt enforced, the governing decided to constitute a committee to put your client on trial in accordance with the dictates of the very Act that established UEW. Your miserable clients failed to appear before the committee which in itself constituted a clear misbehavior. Their removal was in order and if you think it was an error, go to court and get the decision overturned and stop putting your intelligence on the altar of mockery and ridicule.