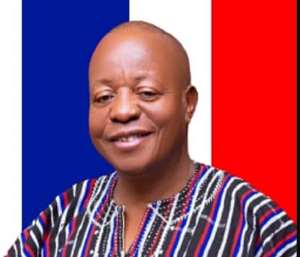 The delegates in Western North Region would soon be joining the queue to elect their Regional Executives for the battle ahead of us in 2024 elections. Members of the New Patriotic Party have a difficult road to navigate particularly because of the very tsunami in 2020 elections which nearly wiped out the gains we made in 2016 general elections.

The memories of 2020 still remain unpleasant to the elephant as a matter of fact due to the flip-flop with regards to Parliamentary seats. The only thing which would help us undo the memories of 2020 elections is to fortify the party with men who have records known to the party. (Ay3 bida fo"> not any hopeless Sorme hw3")

In fact, the records would show that, the NDC benefited more in respect of the flip-flop in Parliamentary Seats in 2020. Even Almighty Ashanti Region which remains the mitochondrion of the New Patriotic Party was never spared in what many have described as tsunami against the NPP in 2020 elections.

It is important to also note that, if we had defended all those seats, we won for the first time in 2016 elections from the camp of the NDC, our struggles in parliament today wouldn't have even sufficed in the first place.

In Western North Region also, those who are fighting Chairman Assuah have for "shegey reasons" decided to ignore the fact that, among(st) the sixteen Regions we currently have in Ghana, it was only in Western North Region that, the NPP didn't lose a single seat it won for the first time from the NDC in 2016.

Chairman Assuah's smooth handling of an NDC dominated territory since time immemorial gives the assurance that, if he is allowed a second opportunity, the dominance of the NDC in this newly created region would be curtailed for good.

Come to think of it, for the first time in the history of this country, the only time Presidential election results went in favor of the NPP in Sefwi Wiawso Constituency was in 2020 general elections.

This historic record under Chairman Assuah is also the reason why the camp of Ahwois are bent on doing what ever they can to reverse what they perceive as a blot on their faces owing to the fact that, they are always seen as the forces behind the NDC's dominance in the Region due to the power they wield in NDC as sons of the soil.

In 2020 elections what broke the camels back was also the fact that, the party for the first time won Presidential election results in Sefwi Akontombra under Chairman Assuah.

Isn't it quite strange that, those who are clamouring for his replacement are not telling us what is expected of every responsible Regional Chairman which Mr. William Benjamin Assuah failed to do in the just ended elections for which reason they are calling for change.

The fundamental question is, what would been their game plan in 2020 elections if they were those in charge considering the most difficult situation the party faced which situation I daresay brought our margin of votes difference between John Mahama and Nana Addo in 2016 elections from One Million to Five Hundred Thousand ?

Regrettably, the lame jockey who is being sponsored by a certain cabal in the Region who are bent on mortgaging the prospects of the NPP in Western North Region for a peanut cannot even give an answer to this above fundamental question.

With the benefit of hindsight, I wish to remind our respected electorate that, the reason for the rejection of the lame jockey who keeps parading himself as the alternative in the WNR Chairmanship race in Tarkwa some years ago when Western North Region was under Western Region must prevail this time round for the goodness of the party.

Some years ago, Ben Armah presented himself for the Western Regional Chairmanship position. In UMAT where the election took place he recorded his first ever defeat on earth. The reason for his rejection was purely on grounds that, he had no record known to the NPP. The electorate instead traded him for Chairman Ndede Siah who is the current Western Regional Chairman.

There is a truism that, when a seller goes to the market to present his or her goods for sale and buyers reject the said goods, is either the goods had some defect(s) or were not mercantile. The next market should see a repackage of the same goods in order to attract potential buyers.

The irony of the above truism is what we are seeing today. The very person delegates rejected some years ago is seeking to come back without any value addition because he thinks, this time round we may not be able to decipher a "giffen goods from ostentatious goods"

Any attempt to foist any giffen good through our throat in this crucial moment must not see the light of day. We cannot afford to sell our colored TV for black and white.

Boos at Akufo-Addo: Someone failed and caused this monumenta...
10 minutes ago