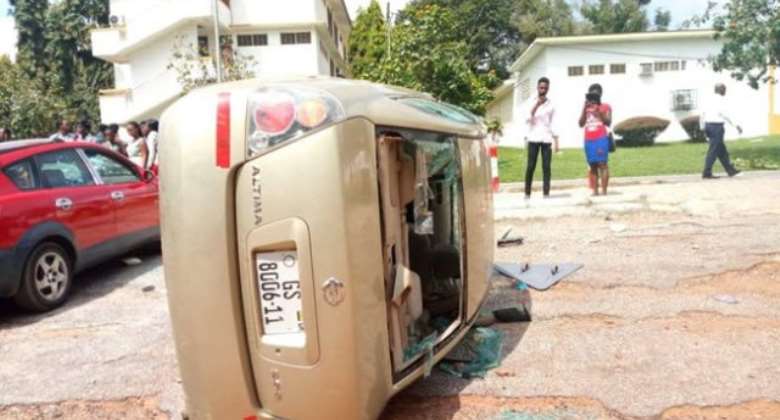 A week after students of Kwame Nkrumah University of Science and Technology (KNUST) went on a rampage and destroyed properties, authorities of the university have put the cost of damage between GH¢1.6 and GH¢1.7 million.

The student revolted against the school authorities in protest over what they say was inhumane treatment and heavy-handedness by the authorities.

University Relations Officer, Kwame Yeboah Jnr., said the figure was the result of an extensive work by a team of experts put together by KNUST authorities.

“As I speak to you now, the University has started [repairing] vehicles that had their windscreens smashed…

Kwame Yeboah explained that an agreement on which persons or group of persons to pay for the estimated cost of the destruction is yet to be made.

“We would have to wait [for an agreement on who will pay]. I believe strongly that if an investigative body is put in place, they will definitely come out with who did what and who is to pay what and all that. We would have to leave all that for the body,” he said.

Resolution
Calm has been restored following Government’s request to Otumfuo Osei Tutu II, Chancellor of the KNUST, to lead a process to reconstitute the University’s Governing Council.

An interim council that was announced had been met with widespread rejection.

The new Council is expected to be reconstituted by Friday, November 2, 2018, and will take over from the Interim Governing Council, according to a press release issued in Accra by the Information Ministry.

“Government has subsequently engaged with UTAG and updated the Association accordingly. UTAG has undertaken to restore services, cooperate in resolution efforts and encourage other stakeholders to join resolution efforts,” the release signed by the Information Minister designate Kojo Oppong Nkrumah, said.

Meanwhile, the University Teachers Association of Ghana (UTAG) has welcomed the intervention of Otumfuo Osei Tutu II in the impasse at the University.

The Ashanti Region chapter of UTAG has since called off its strike which was in protest over an earlier decision by the National Council for Tertiary Education (NCTE) to remove the Vice Chancellor of KNUST, Prof Kwasi Obiri-Danso.

In solidarity with UTAG, the members of the Teachers and Educational Workers Union of Ghana (TEWU) at the KNUST also hit the streets on Monday to protest the dissolution of the school’s Governing Council.