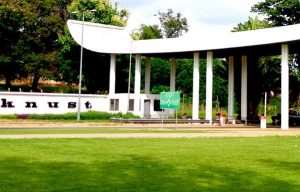 The Kwame Nkrumah University of Science and Technology (KNUST), is expected to inaugurate its Governing Council later today [Tuesday].

The interim Council is meeting this morning, and the new members that the government presented will be sworn in after that, according to the KNUST Public Relations Officer, Kwame Yeboah.

“From what I gather, new members will be sworn in today,” he said on the Citi Breakfast Show.

He also said representatives from the University Teachers Association of Ghana (UTAG), and the Teachers and Education Workers Union (TEWU), have been retained on the Governing Council.

On when the school will reopen, Mr. Yeboah said the council will provide more clarity after the meeting.

He continued to suggest that “possibly they [students] might have to go home for the Christmas holidays and come back and write the examination.

The Chancellor of the University, Otumfuo Osei Tutu II, had been leading efforts to ensure the university reconstituted its Governing Council.

The KNUST governing council was dissolved after management-student tensions culminated in violent protests and the school was shut down.

The Vice-Chancellor, Professor Kwasi Obiri Danso, was also asked to step aside.

The government constituted an interim University council after it closed down KNUST over the violent student protest.

It initially gave the council a three-month tenure to work towards addressing the impasse.

There was opposition to the dissolution from members of the Senior Staff Association, the Ghana Association of University Administrators (GAUA), the UTAG and TEWU.

The lecturers and university administrators, who went on strike, maintained that the government failed to follow the due procedure in trying to resolve the impasse between the University management and the students.

A new council was supposed to have been constituted two weeks ago, but stakeholders were unable to arrive at an agreement.

The school was to reopen on November 8 but that also did not happen because of the impasse between the government and the unions.

Background
The arrest of 10 students and one alumnus of the school compelled the Students' Representative Council (SRC) to mobilise for the protest last month.

The students were arrested for a holding vigil on campus last Friday without permission, according to the school authorities.

One other student who was allegedly mistreated by the internal security was hospitalised at the KNUST hospital.

The Executive Council of the SRC said the demonstration was needed to convey students' frustration over disrespect and oppression by the school.

The arrests came after the KNUST management served notice that it had suspended the organisation of vigils (morales) in the school.

The management said this was because of “several negative issues encountered recently concerning morales in the hall.”

Some of the protesters called for the removal of the Vice-Chancellor.

The SRC said the actions of the campus security and the police officers were a “gross deviation” because the two agencies were instead to protect them.

The Council also promised students that it would ensure the security officers who allegedly beat up students are held accountable while urging students to remain calm.

A day later, the school was closed down indefinitely.

We take responsibility for letting Ghana down, pick the posi...
36 minutes ago