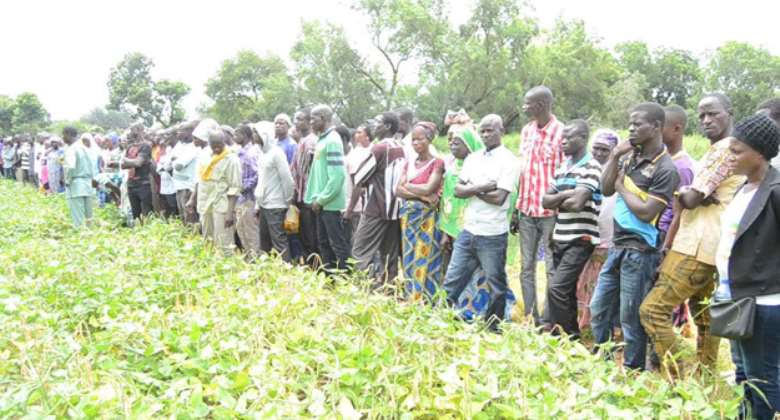 The ritual annual floods and the spillage of the Bagre Dam of Burkina Faso have once again in this farming season hit the Upper East region including some parts of the Upper West and the Northern Regions, all in Ghana, causing destructions to lots of farmlands in the regions.

Several reports gathered from the Ghanaian media landscape which confirmed the incident that majority of farmers from the aforementioned regions were affected, gave out the farmers who farmed along the White Volta River enclaves as the most affected farmers. Their farm crops including maize, millet, rice, sorghum groundnut, beans among others got devastated by the floods as a result of the spillage of the Bagre dam that hit the regions in this year’s cropping season.

Before this catastrophe befell on the farmers in the region, Research had shown that many farmers, particularly smallholder farmers, find it difficult if not impossible to feed their families throughout the lean season which stretches up to five months in the year, before the onset of the next farming season.

One, therefore, does not need a prophet or soothsayer to be told that if care is not taken to mitigate the plight of the farmers, it would worsen the already food insecurity situation in the area and this could have dire negative consequences on the people particularly women and children.

However, one of the renowned Scientific Research Institutions in the country that has initiated very proactive measures to complement government’s efforts at addressing this challenge is the Savannah Agricultural Research Institute of the Council for Scientific and Industrial Research (CSIR- SARI).

The CSIR- SARI station based at Manga near Bawku Municipal of the Upper East Region with funding support from the “Kirkhouse Trust SCIO Project”, based in the United Kingdom have designed some packages to support farmers along the White Volta zones in the Bawku West and the Binduri Districts of the Upper East Region whose farms were devastated by this year’s floods and the spillage of the Bagre Dam in Burkina to use the residual moistures along the White Volta enclaves to cultivate two improved varieties of Cowpea for this year’s dry season farming.

The “Kirkhouse Trust SCIO Project” funded the group of Research Scientists drawn from the CSIR-SARI , led by a Senior Research Scientist of CSIR-SARI in-charge of the Manga Station, Dr Francis Kusi, two years ago to promote farmers access to the seeds of five improved cowpeas varieties released by the project in 2016 through the support of Kirkhouse Trust SCIO Project.

He explained that two of the five new varieties that have been selected for the farmers have the greatest potentials of thriving very well in residual moisture areas such as the flood plains of the White Volta River.

As a means of introducing the farmers to the two new varieties, Dr Kusi, conducted the farmers who came from their respective communities along the White Volta River enclaves in the Bawku West, Binduri and Bawku Municipal in the Upper East Region around the demonstration and seed production fields of the two new varieties at the CSIR-SARI station at Manga near Bawku Municipal recently.

Additionally, the Senior Research Scientist added that the project had also trained many certified seed producers and their outgrowers as well as community seed producers and promoted their access to the seeds in the various communities. These seed growers had already in their stocks the seeds of the new Cowpea varieties and would make them available at very moderate cost to the farmers to crop for this dry season.

The Senior Research Scientist mentioned the two varieties as “Kirkhouse Benga” and “Wang Kae”, and explained that the rational for introducing the affected farmers to the new varieties of cowpeas was for them to make the loss they experienced during the floods and to help increase food security, create wealth as well as improve upon their livelihoods.

Dr Kusi who stated that the lands around the White Volta River were very rich in nutrients and very suitable for the growing of the new cowpea varieties, said the varieties are early maturing (60 days), produce a lot of pods with about 16 bigger seeds per pod which makes them very high yielding. The farmers can therefore produce these varieties between October and early December before transplanting their usual dry season vegetables like onion and tomatoes on the same piece of land.

“These varieties have been approved by the National Varietal Release and Registration Committee (NVRRC) of the Ministry of Food and Agriculture (MoFA) and certified by the mandated institutions for farmers”, the Senior Research Scientist indicated.

Farmers express shock about the high yields of the demonstration fields

The farmers who were amazed about the greater yields of the crops at the demonstration fields, have started demanding for the seeds of the new cowpea varieties from the certified seed producers trained by the project to enable them plant for this dry season farming.

The District Director of MOFA in charge of the Bawku West , Mr Elias Atambire, who indicated that the floods this year destroyed about 800 hectres of farm produce in his District made up of maize , rice and sorghum along the White Volta River communities , expressed optimism that the intervention would help salvage the farmers plight.

The 2016 second National Best Farmer in Ghana , Ariku Martin Akudugu , one of the project beneficiaries of seed producers of the new cowpea varieties who also have 1375 out grower farmers, encouraged the farmers to take advantage of the opportunity provided them to overcome the challenges of food security.

It should be pointed out that unlike other crops , the demand for cowpeas in the country are very high as many institutions including the Senior High Schools, the Ghana School Feeding Programme, the Ghana Prison Service , the middle to high income earners and many households relied on the crop for food which is a rich source of protein.

A research conducted by the CSIR-SARI station at Menga in the Bawku Municipal and other research institutions revealed for instances that last year many companies and individual commercial farmers came to the region looking for good quality seeds of improved cowpea varieties to purchase from farmers but could not get enough. This should therefore serve as an encouragement for farmers to take advantage of the high demand of the crop and to produce to empower themselves economically.

Furthermore , one of the good things about the project is that, it had also instituted measures to link farmers who would be farming the crops to marketing outlets for good price.

Additionally, unlike the traditional Cowpeas that are susceptible to Striga , a parasitic weed, which often attack the crops and could cause 30% or more yield loss to the crop, the Wang Kae and the Kirkhouse Benga Varieties are resistant to Striga, cowpea aphid, drought, root rot disease and takes two months to mature and are therefore climate resilient cowpea varieties.

Apart from the project breaking the bottlenecks confronting the rural smallholder farmers in accessing improved quality seeds, ensuring that farmers no longer spend huge sums of money traveling for far distances in search of seeds from farm input dealers at the District capitals to enable them plant , it is also providing employment to the teeming youth.

Again, the project is also linking these community seed producers to private seed companies as out-growers and facilitating the registration of some of them as seed producers as a sustainability measure before the end of the project

Already the individual farmers in the Northern, Upper East and Upper West Regions who were selected by the project and trained by the Research Scientists in seed production are doing well by producing quality seeds in their communities.

In conclusion whilst acknowledging the impact of the Kirkhouse Trust Project on the rural farmers, there is the urgent need for MOFA and other development partners to team up with CSIR- SARI to expand the training programme to cover more farmers in the rural settings to go into more seed production of cowpea and other crop varieties such as maize, millet, sorghum, rice, soya beans among others to help improve upon food and nutrition security and job creation situations in the country.

A Senior Research Scientist of CSIR-SARI in charge of the Manga Station, Dr Francis Kusi, conducting the farmers around the demonstration fields and seed plots at Manga

The farmers being conducted by Senior Research Scientist of CSIR-SARI in charge of the Manga Station, Dr Francis Kusi on the demonstration fields

A Senior Research Scientist of CSIR-SARI in charge of the Manga Station, Dr Francis Kusi, conducting the farmers around the demonstration fields and seed plots at Manga