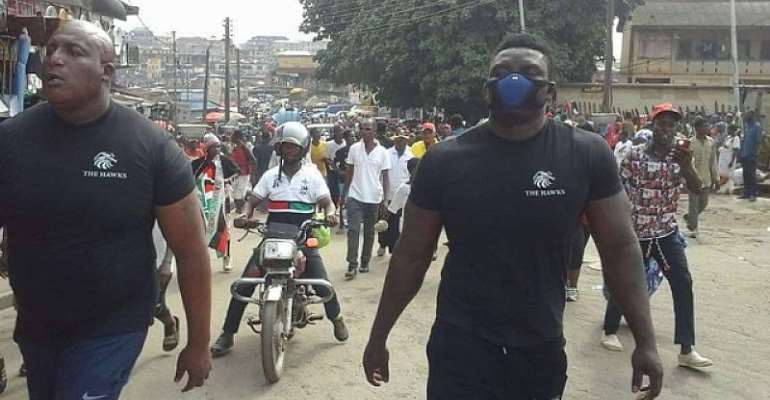 Political vigilantism has become more or less a permanent feature in the Ghanaian politics, especially, in the last decade in the quest for political power. Political party vigilantism dates back to the first republic under President Kwame Nkrumah where the opposition, United Party (UP) had what was called "The Action Troopers." The then governing Convention People's Party (CPP) had the "Veranda boys."

The UP formed the action troopers because there's rising political violence against its members and felt compelled to protect their loyalists against Nkrumah's hoodlums.

Political vigilantism has become more or less a permanent feature in the Ghanaian politics, especially, in the last decade in the quest for political power.

They are mainly desperate unemployed fanatics of politicians who are grouped to provide internal party security. They often have dreaded names and funny nicknames.

In contemporary times, vigilantism started as boys who are loyal to influential political figures but has over time, been formalize and given recognition by the political parties to provide security.

During party events such as congress, press conference and demonstrations, these vigilante groups collaborate with the police to provide security.

They were largely restrained and limited to party activities until in 2016 when hell broke loose.

Early this week, it was reported that the General Secretary of the opposition National Democratic Congress (NDC) has endorsed the formation of a vigilante group known as "The Hawks."

There are also media reports on the formation of additional groups such as "The Lions" and the "The Dragons" by the NDC.

The formation of these groups, the political parties have explained, is to provide security within the party.

But it is also largely due to the reluctance of the Ghana Police Service to investigate and prosecute crimes against opposition members or their properties.

Prior to coming into office in 2016, then opposition New Patriotic Party (NPP) were very clear that they do not trust the police.

The mistrust followed a series of unresolved chaos and confusion at the party's head office.

Another reason the for the formation of the vigilante groups is for the protection of ballot boxes during elections.

Both the NDC and NPP have, depending on who's in power, accused the other of stanching and stuffing ballot boxes.

These vigilante groups, therefore, provide the needed protection for the ballot boxes in the quest for political power. Meanwhile, policy think tank IMANI Africa has attributed the phenomenon to the rising unemployment in the country.

President of the think tank, Franklin Cudjoe, said in February this year that most unemployed youth hide behind political parties to perpetrate heinous crimes because they do not having anything doing.

“…Because of the absence of jobs, they probably would want to be known as vigilante groups. It's part of a problem we have as a developing country where we have serious challenges with unemployment and I think the root cause is what we should be looking at. In order for these not to rear their ugly heads again, it is important to have a very long-term view on how to deal with these matters,” Mr. Cudjoe said.

-Entering dangerous times- Ex-president John Mahama , now presidential aspirant of the NDC, also warned in January this year that Ghana is entering what he calls dangerous times following the rise in vigilante groups in the country.

Mr Mahama said that it was high time civil society organisations intervened so that the country's peace and stability can be sustained.

“Ghana has earned the accolade as the beacon of democracy because the elections was largely successful and it's not broken down into violence and bloodshed like we have seen in many other countries. But let me caution we are entering into a very dangerous phase with the rise of all these vigilante groups," he said.

“I've heard NPP apparatchiks say they will not abolish the vigilantes and they are going to use them to guard. They have groups in every region and they have different accolades. In most regions, we don't have vigilante groups, if you're asked to mention any name in NDC the only name they will mention is Azorka Boys. The NPP formed those groups because they said they have no trust in the security services to protect them.”

He added: “If NDC decided to also in every region set up those groups what can we expect. That is why Civil Society must speak to this vigilantism in a major way because it has the tendency to lead us into a spiral of violence.

--President's promise--
When President Nana Akufo-Addo's Ashanti Regional Security Coordinator was attacked by the Delta Force, he vowed to end the phenomenon.

The promise is yet to fulfilled considering the emergence of new vigilante groups in the main opposition NDC.