Harnessing Traditional Medicine Practice In Ghana •The Role Of CPMR 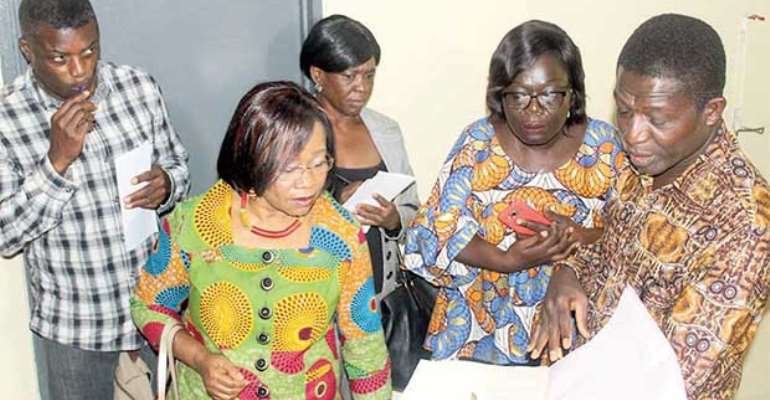 Long before the introduction of scientific medical care by Europeans, African nationals, including Ghanaians, relied on traditional medicines for the cure and treatment of tropical ailments like malaria, headaches, stomach upset, skin diseases and many more.

Native doctors in Africa who have been responsible for curing people learned their trades from their ancestors as a family recipe relying on herbs, tree backs and roots, seeds, flowers and fruits for the treatment of ailments.

This method of medical care is so popular that it has been in use even now side by side with the scientific medical care in our towns and villages.

Traditional medicine practice, otherwise known as indigenous or folk medicine, is often the first choice of remedy for any adverse health condition for many people.

This is particularly also true for those living in remote villages and areas where distance and cost are barriers to modern forms of treatment.

According to a report by the Council for Scientific and Industrial Research (CSIR), about 70 percent of the Ghanaian population sees traditional medicine as a desirable and necessary means of treating problems that modern medicine cannot adequately remedy.

CPMR
This aspect of traditional knowledge, developed over generations within various societies and cultures before the era of modern medicine, was however, not formalised, thus, raising questions about its scientific basis.

It was during this time that Dr Oku Ampofo decided to formalise the practice when he returned to Ghana in 1940 as a trained allopathic medical practitioner from the UK.

The colonial administration of health at that time was not willing to employ Dr Oku Ampofo, and so he took the bold decision of establishing his own herbal clinic after consultations with other traditional healers.

The late Dr Oku Ampofo was able to successfully treat a number of disease conditions and as an academic collaborated with academic institutions in the field of research.

It was through such collaboration that in 1971, Dr Oku and representatives from the Ghana Academy of Arts and Sciences sent a proposal to the then government recommending the establishment of a Centre for Plant Medicine Research (CPMR), a proposal which was granted in 1975.

The aim of the centre located at Mampong in the Eastern Region was to promote scientific research, knowledge and development in the field of plant medicine with a vision to make herbal medicine a natural choice for all and a mission, to gain the highest recognition for research and development of herbal products that meet the exacting needs of both patients and industry, through innovative research and productive partnership.

Since then, the centre and successive governments have been working to transform traditional medicine practice into a potent vehicle for healthcare delivery in Ghana.

The current executive director of the centre who has been in existence for a little over 40 years, Prof Augustine Ocloo, says the centre has contributed significantly to the development of herbal medicine practice in Ghana.

Prof Ocloo further indicates the centre runs toxicology and efficacy tests for other herbal medicines not produced by the centre.

He, however, points out that the centre does not give certification for herbal products, indicating it is the sole duty of the Food & Drugs Authority (FDA).

“The issues of how herbal medicines are presented, the issues of what the claims are and the ingredients, even the area of alcoholic bitters, we try to change the face of that one too by adding scientific knowledge to it and now it's a huge market,” he reveals.

Nibima/Malaria
Ghana is one of the sub-Saharan countries with a high burden of malaria across the entire spectrum of society.

In the first quarter of 2017, for example, data from the National Malaria Control Programme (NMCP) showed that Ghana recorded 2.3 million suspected malaria cases at the out-patient department (OPD).

This represents a 1.18 percent increase over cases reported during the same period in 2016. Averagely, 24,885 suspected malaria cases were recorded daily.

Out of the 143 malaria deaths recorded in 2017, 74 deaths occurred among children under five years. The financial cost of malaria to the private sector is also huge, as most workers miss working days due to malaria.

As part of their role, the Centre for Plant Medicine Research has conducted studies on some medicinal plants, particularly cryptolepis sanguinolenta (Nibima), which has proven to be highly potent in treating malaria and other health conditions.

“The plant has been used in other African states for the treatment of hepatitis, malaria, wounds, diarrhoea, inflammatory conditions, hypertension, microbial infections and stomach aches. Clinical studies indicate that Nibima clears malaria parasites in patients,” he says.

“We all know about the artemisinin tree and all the various derivatives it has to the point that now WHO is recommended that ATCs are the recommended drugs we use for malaria globally,” he adds.

Dr Appiah, however, stresses the need for the development of Nibima in order to effectively treat malaria looking at the resistance nature of the parasite to malaria drugs.

“The current drugs we are using now if resistance develops, we don't have any alternative as a nation, so being the malaria endemic zone, I think it is not wise to sit, allow resistance to develop and then we throw our hands in the air. I think that we should always have something in place so as a nation we will not be found wanting,” he indicates.

Dr Appiah further highlights that if China has been able to develop their herbal medicine practice at national level, then Ghana can do same.

“The issue is how do we go from and that is where we need more government support for our research activities,” he states.

He believes that the addition of herbal products unto the national medicine supply chain will not only clear strengthen the industry but also help with standard regulation.

Prof Ocloo also raises concerns over the way herbal medicines are sold in the country, stating it has not helped in projecting the industry since most of them do not have FDA certification or are used for other thing outside what they have been produced for.

The Executive Director for AMMREN, Dr Charity Binka, says stronger government support and collaboration with major players in the health sector like the CPMR is key in developing and popularising herbal drugs is an opportunity that should not be overlooked by government.

The Board Chair of AMMREN, Assistant Commissioner of Police (ACP) Ellen Sam, a pharmacist with the Police Hospital, added her voice to the call for more government support to the centre, saying though Ghana has achieved some success in malaria prevention and control, stronger collaborations with the CPMR in the development of products would help eliminate the diseases quickly.