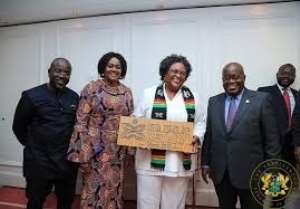 Several imposing European forts and castles harbouring harrowing reminders of an intense and complex history of the Trans-Atlantic slave trade over centuries are dotted long the West African coast.

This, on its own, has made West Africa the focus for millions of African descendants reacting to their marginalisation by tracing their ancestry and identity.

So as August 2019 marked 400 years after the first enslaved African arrived in Jamestown Virginia, United States of America (USA), there was no better time for people of African descent to commemorate the resilience of their ancestors than to visit the countries of their origin and experience the life and culture of their people

It also afforded the over 400 million people of African descent living outside the continent the opportunity to experience Africa from a different perspective other than the one dimensional image of hunger, poverty, war and mass exodus to Europe painted by the media.

The New York Times 1619 project perfectly sums this up, “In August of 1619, a ship appeared on this horizon near Point Comfort, a coastal port in the English colony of Virginia. It carried more than 20 enslaved Africans, who were sold to the colonists. No aspect of the country that would be formed here has been untouched by the years of slavery that followed. On the 400th anniversary of this fateful moment, it is finally time to tell our story truthfully.”

Thus, inviting the global African family (home and abroad) to the land of their ancestors, Ghana’s 'Year of Return' was a major landmark for spiritual and birthright journey for people of African descent, making Ghana the focus of activities to celebrate the cumulative resilience of all the victims of the Trans Atlantic slave trade who were scattered and displaced through the world in North America, South America, the Caribbean, Europe and Asia.

“In the year 2019, we open our arms even wider to welcome home our brothers and sisters in what will become a birthright journey home for the global African family,” Ghana's President Nana Addo Dankwa Akufo-Addo said during the launch of the campaign.

“It was our hope that the 'Year of Return' would be a joyful and learning experience all round for all of us on the continent and our kith and kin from the Diaspora, especially in affirming our determination that never again should the African peoples permit themselves to be subjected to such dehumanising conditions, sold into slavery, and have their freedoms curtailed,” he added.

The Ghana Tourism Authority (GTA), under the auspices of the Ministry of Tourism, Arts, & Culture led the 'Year of Return' campaign in collaboration with the Office of Diaspora Affairs at the Office of the President, the PANAFEST Foundation and The Adinkra Group of the USA.

One of the main goals of the 'Year of Return' campaign was to position Ghana as a key travel destination for African-Americans and the African Diaspora. Beyond tourism, this initiative also supported one of President Akufo-Addo's key developmental agendas, 'Ghana Beyond Aid'.

“We know that tourism can be a leading indicator to business and investment,” then Minister of Tourism, Arts, & Culture, Catherine Afeku, said at the official launch of the 'Year of Return'.

“We are focused on ensuring that our brothers and sisters have a safe, pleasant and wonderful journey home, so they will want to come back, get involved, see the opportunity that exists in Ghana for us to work together and begin to rebuild what has been stolen and lost over the past 400 years,” she added.

According to UNESCO, there are four slave castles and 23 slave forts still visible along Ghana's coast, and for many people of African descent, it was important to visit the literal and symbolic place where their ancestors entered slavery.

American actor of Ghanaian descent, Boris Kodjoe, has played a part in reconnecting the rest of the world ‒ especially African-Americans ‒ back to their routes.

Under his Full Circle Festival, he has brought actors and celebrities of African descent to Ghana to have firsthand experience of the life and culture of the West African country, also known as the gateway to Africa.

He believes it is time the rest of the world see Africa in a different view.

“People around the world do not get a positive visual representation of Africa due to decades of one dimension media coverage and we wanted to change that narrative and show people the vibrancy and diversity in Africa, the beautiful people, the food, the music, the night life, the historic site. So, we brought our friends to experience Accra Ghana to have an experience and it was a profoundly transformative experience for every single person that went,” he said in an interview on an American talk show, The View.

Mr. Kodjoe ‒ who has visited the country several times and on some occasions with his family ‒ said it has always been an emotional experience for him, especially during the visits to the slave dungeons in the castles.

“It is such an emotional experience because you feel the spirit of those who were in these dungeons and went through these atrocities that we know about. It is really amazing when you get the chance to reconnect with your routes because you realise that you are not the descendants of slaves, you are descendants of enslaved Africans which is a big difference and understanding that helps you reclaim your cultural identity which is so important especially for African Americans,” he indicated.

“Once you understand where you came from, you have a better idea of where you are going so it is really transformational,” he further explained.

Apart from individual Diaspora activities like the Full Circle, the Ministry of Tourism also launched a year-long activity which brought thousands of people to Ghana in 2019, including US House of Representatives Speaker Nancy Pelosi and the Congressional Black Caucus, American talk show host Steve Harvey, WWE Champion Koffi Kingston, among others.

By December 2019, Ghana had hosted close to one million visitors, exceeding the 500,000 projected number of visitors by the Ministry of Tourism.

As the curtains were drawn for the celebration of the 'Year of Return', President Nana Addo Dankwa Akufo-Addo in December 2019 launched the 'Beyond The Return, The Diaspora Dividend' initiative.

The rationale of 'Beyond The Return', the President indicated, is to “engage Africans in the Diaspora and all persons of African descent more positively in areas such as trade and investment co-operation, and skills and knowledge development.”

The Ghana Tourism Authority, the implementing agency under Ghana's Ministry of Tourism, Arts & Culture, would be at the forefront of bringing all stakeholders together in what would be a focused drive at the empowerment of black people, using Ghana as the hub.

The President urged Diasporans to change the African narrative which has been characterised largely by a concentration on disease, hunger, poverty and illegal mass migration.

“Let us all remember that the destiny of all black people, no matter where they are in the world, is bound up with Africa. We must help make Africa the place for investment, progress and prosperity, and not from where our youth flee in the hope of accessing the mirage of a better life in Europe or the Americas,” he said.

That, according to President, is what 'Beyond The Return' will seek to do, “so we can derive maximum dividends from our relations with the diaspora in mutually beneficial co-operation, and as partners for shared growth and development.”

According to the Washington, D.C.-based Migration Policy Institute (MPI), half of the foreign direct investment ‒ $26 billion‒ that transformed China into a manufacturing powerhouse in the 1990s originated from the Chinese Diaspora.

“That is why I am excited and keen on this new initiative of 'Beyond The Return', and the renewed enthusiasm around building Africa together. Let us imbibe in ourselves a deep consciousness and understanding of the goals and history of the African peoples,” President Akufo-Addo stated.

The second half of the 20th century, he added, witnessed a great blow for human freedom and progress, when the African peoples, in the wake of Ghana's shining example, liberated themselves from the colonial and imperialist yoke and the racist ideology of apartheid and emerged as free, independent peoples to construct new nations of hope and advancement.

“The first half of the 21st century should consolidate this development and see the growth of modern, prosperous, technologically-advanced nations within a united Africa, which would make a reality of the dream of the 21st century as the African century, and bring dignity and respect to black people all over the world,” the President said.