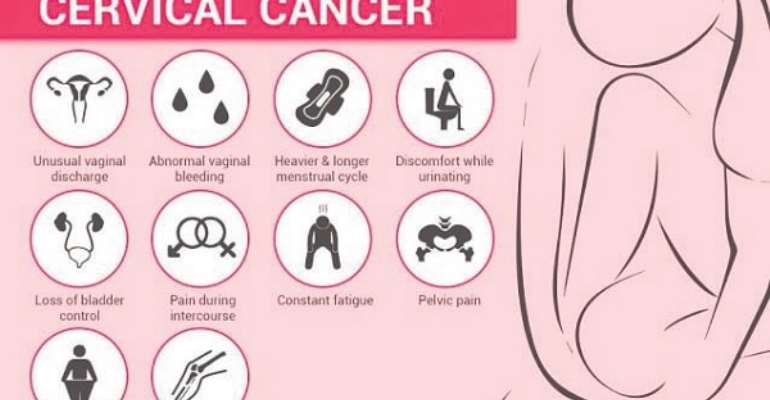 BWhen Tira Adusei was advised to visit the Reproductive Health Unit of the Korle-Bu Teaching Hospital (KBTH), little did she envisage the possibility of the discovery of cancerous cells in her cervix.

“Since I was told of the possibility of having cervical cancer, I am not myself and I have not had any sleep,” she says.

The forty-year-old mother of seven has been experiencing prolonged bleeding a few months after the birth of her seventh child, who is seven months old.

“It started after I gave birth to my seventh child. Seven months after my delivery, I had my menses after that I realised that when I had sexual intercourse with my husband, I bled,” she narrates.

The petty trader who deals in children's diapers lives with her second husband and children in Amasaman, a suburb of Accra, further narrates that “I went to the hospital and they gave me some medication for the bleeding to stop.”

Tira, however, indicates that she still experienced profuse bleeding, which sometimes made her lose consciousness. She says after being admitted at the Dodowa Government Hospital in December 2018 for the same health condition, she decided to call a nurse at the Reproductive Health Unit at the KBTH, upon advice for further tests to be done.

She says her intention for going to the health facility was to inquire of the tests she had to run but the cost – GH¢150– scared her away.

“I came to inquire of the test I had to run but when they gave me the cost I could not afford it, so I went home and told my husband who also did not have all the money for the test, so we waited till we had all the money,” she explains.

Rose Eduful, Principal Nursing Officer, KBTH, mentions that upon examining Tira, they needed to conduct further tests to show if, indeed, it is cervical cancer and at what level the disease has developed.

Nurse Aduful says Tira, like many women who visit the facility, lack the financial means to have the cervical cancer screening done using the Pap smear test — a procedure to test for cervical cancer in women which involves collecting cells from the cervix — the lower, narrow end of the uterus that’s at the top of the vagina.

Research shows that detecting cervical cancer early with a Pap smear gives women a greater chance at a cure.

“When she came she did not have any money, and a lot of women are like her, sometimes we have to use our own monies to help them run the test,” she adds.

Cervical cancer occurs when the cells of the cervix grow abnormally and invade other tissues and organs of the body.

In addition, early sexual contact, multiple sexual partners and births, and taking oral contraceptives (birth control pills) may increase the risk of cervical cancer because they lead to greater exposure to HPV.

Dr. Kwaku Ansah-Opoku, obstetrician gynaecologist at the KBTH, reveals that cervical cancer continues to be one of the leading causes of morbidity and mortality at the gynaecology unit of the KBTH.

Worldwide, he adds that 528,000 new cases of cervical cancer are diagnosed yearly, representing 20 to 25 per cent of all new cancers among women.

Unfortunately, 266,000 women diagnosed with the disease die every year, translating to a woman dying every two minutes from cervical cancer.

“What is more worrying is that 90 per cent of them are in low to middle income countries and do not have the means to afford the cost of screening which is life-saving,” he adds.

Nationwide, 3,052 women are recorded to be diagnosed with cervical cancer yearly, according to Dr. Ansah-Opoku, out of which 1,556 die from the disease annually.

“Every five hours, a women dies from cervical cancer in Ghana,” he stresses.

He says although it is the commonest gynaecological cancer, only 2.7 per cent of Ghanaian women go for cervical cancer screening every three years.

Principal Nursing Officer at the KBTH, Amanda Adu-Amankwah, pointed out that the cervix is not visible, “that is why it is important to have the screening done. We call it the silent killer, because even if I give you a mirror to have a look, you will see your vulva and not your cervix.”

She adds that unlike breast cancer that one can touch and feel a lump in the breast “this you will not see till the tests – visual inspection with acetic acid, Colposcopy or the Pap smear is done.”

Mrs. Adu-Amankwah further highlights that the virus which is sexually transmitted from one partner to the other can stay in the cervix of the woman for 10 to 20 years before it manifests, “so you will be carrying it and you will not know.”

Blood discharge after sexual intercourse, abnormal discharge, loss of appetite, and swollen feet are some of the symptoms, she advised, must be reported to the hospital “because it can be anything.”

Significant strides have been made over the years with regard to cervical cancer screening and treatment. Mrs. Adu-Amankwah has experienced the various developments in her 27years of work at the unit.

“Twenty-seven years ago, cervical cancer was not common and so very little advocacy was done around the health condition. The doctors at the time wrote the test to be done. We did it and sent the results back to the doctors for treatment,” she indicates.

She says at the time young people were hardly diagnosed with cancers, “those that came in were elderly people; some of them came in advanced cases.”

Now, she says cervical cancer screening and treatment has changed for the better.

“Now we have been taught to see the pre-cancerous lesion and then give some treatment and if it's beyond us we refer to the doctors to work on them,” she avers.

“Visual inspection with ascetic acid is the nurse that does that, Colposcopy, another type of screening for cervical cancer. We do some counselling after their results shows positive and involve the families to give them the support they need during treatment,” she explains.

She states that the unit has also become a one-stop shop for clients for their cervical cancer needs from screening to diagnosis and sometimes treatment.

Government also took a major step in 2013 towards preventing cervical cancer in the country. Young girls between the ages of nine and 13 benefited from a human papilloma virus (HPV) immunization exercise that would protect them against the possibility of acquiring cervical cancer.

However, the exercise did not continue after the project ended a few years ago.

World Cervical Cancer Week is marked in February to raise awareness about the disease, and the Reproductive Health Unit at the KBTH uses this week to offer screening at half-price for women.

Mrs. Adu-Amankwah says the cost reduction helps the unit to screen more people who would otherwise not do the examination because of financial constraints.

“We have had a lot of cases that women have come and doctors have requested Colposcopy for them. We tell them the prices and they tell you I don't have 150 so they go back and the next time you see them it is far gone,” she stresses.

“But through advocacy people become aware that there is something they need to check and we are catching people early and saving a lot of lives,” the principal nursing officer added.

Dr. Ansah-Opoku calls on government to come up with a project that seeks to help broaden the education on cervical cancer.

So as Tira awaits her test results, she wished she had come early for screening.

“I don't know what the test results will reveal but I am hopeful that whatever happens, God will see me through it for my children's sake,” she says.

Collins Dauda is being prosecuted for Akufo-Addo's recklessl...
24 minutes ago