Broken State Bureaucrats Presiding Over Our Broken Institution: Problems With Our Education At The University Of Liberia 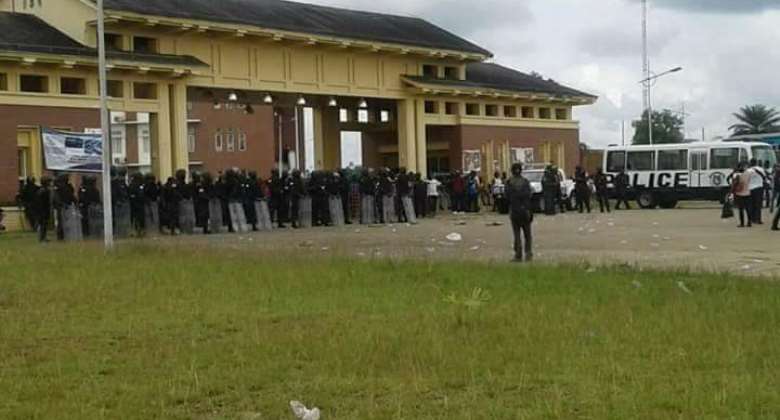 In Liberia, the issue of education has been a concern to the youths who have passion for what they want to do and whom they want to become. The success of every youth in Liberia depends on the knowledge acquired both academically or by experience. We have seen, in time past, that age-old human species, prophets and prophetesses of disorder have taken over our institution.

This which serves as a barrier and serious academic hazard to the conducive learning of our young people at the University of Liberia. Back then in the 70s, the institution was occupied by sophisticated state bureaucrats who monopolized the system, and considered it an institution of specific group of people. That which varnished in a flurry of ectoplasm, after the consequential agitations of conscious student activists, cadrés and militants. And in partial repayment for a long life of dedication to philosophy, they were offered the answer to one question, with no lace attached.

To find the one unfailing path to truth, justice and virtue, we have always talked about the strengths, weaknesses and problems of education at the University of Liberia. We noticed, however, that we quite get around defining our terms.To persue the truth, no matter where it may be or how cleverly it may be concealed, it is a never-ending chase, of course, and being mortal, erring humans, we may never quite catch up with truth and hold it cupped in our hands.

The very search for it, though, cannot but ennobles those who spend their lives in such a quest. Meanwhile, the cultural heritage of the race must be handed down otherwise each generation would have to spend its valuable time rebuilding the society. Education focuses the accumulated wisdom of the past upon the annoying catastrophes of the present in order to make possible a better future, to teach organized, disciplined and systematic subject matter, and not life adjustment.

The problems students of the University of Liberia are faced with have turned into oral tradition, and the many radical literatures and action programs of the militants would turn the institution into an oasis of freedom. The University of Liberia has remained standoffish from the moral, political and social issues of contemporary society and has simply acted as the servants of the status quo, selling its service to the highest bidder and ignoring the true interest of the students. Students have no real part in making educational and social policy an are being programmed by some administrators to fit into an unjust, undemocratic, and racist society, and faculty members, who control the curriculum and teaching system, are concerned with following their own academic careers and not with the education of students.

And so, the teaching has therefore been of low quality, dehumanized, and organized in a system made to suit the convenience of the faculty. The system is contaminated with dilapidated laboratories, libraries with outdated materials, old buildings that require renovation, lack of internet facilities, lack of recreational centers, lack of research centers and etc. In addition, professors lecture to students in large classes three to four times a week, in one hour period, with one period a week for discussion and test. Most of the lectures are boring and abstract and cover ground also covered in assigned text books written by other professors who are also boring.

Students are taking required courses, either as general requirements or as special requirements of the subject matter departments, with few other options. The students are locked into whatever courses the faculty decides they must take, and no matter how bad the course and the instructor, the student has no abscond and has little to plan their own education. This results in low motivation, or at the very least, no encouragement for developing a motivation on the part of those who are already unmotivated.

Students are to take six courses as the regular number each semester in order to graduate in four years, with three to four units of academic credit for each course. This fragments the students' time and make impossible for him to do justice to any one subject, since the eighteen classes a week plus the discussion and test sections, with each class taught in the same way by lectures and reading assignments, there is no time left to think about what is being learned, and not enough is taught about any one thing. We believe that the total effect of this system is therefore to divorce learning from life to put the students in a passive role, and to force them through the study of materials which are irrelevant to their own interest and to the needs and problems of the society around them.

The social and political pressures on students at the University of Liberia from boards of imported bureaucrats and state legislatures are so great that student activism is repressed, academic freedom is stiffled, and campus dissidence is met by police action, tear gas, clubs and guns. It is discouraging that the social restrictions of campus life treat the students as a child rather than as responsible young adults, and prevent them from enjoying the ordinary privileges of privacy and freedom at the state-run institution. It is against this background that student activists continue to agitate for social Justice and academic freedom at the institution that is considered the biggest barometer of consciousness.

The presidents and administrative staffs (past and present) are crisis managers, fund raisers, politicians, bureaucrats, and not educators. This is why they have in every way failed to find solutions to the many problems faced by the students at the University of Liberia. And because of that some students whose parents cannot afford to send them to private universities have found it difficult to complete a bachelor's program and so, they get involve into other activities which are not part of their ambition.

However, the president of the Republic of Liberia, His Excellency Amb George M. Weah should prioritize the University of Liberia as he promised to prioritize education. Instituting policies that would accelerate the university to a level that would give way to smooth and conducive learning atmosphere at the institution is tantamount to revamping the education system, healthcare system, agriculture system and the national economy. Architects of academic enslavement and injustices should be taken from various administrative positions and let new breed of young people take over the university to run smooth academic activities, make decisions that would promote the plights of the ordinary students.

We also want to recommend to the president, the house of representative and the house of senate that the issues of transportation and tuition be handled; and that the institution will return to status quo anti (LD$175.00 per credit hour).

Until these issues are settled, aluta! The struggle continues.

About the author
Alpha G. Gray is a student of the University of Liberia reading Biology major with emphasis in Medical Science. He is so passionate about his field of studies and wants to make the case in his scientific life. He can be contacted via ([email protected]) ([email protected]) Tel: +231776915195