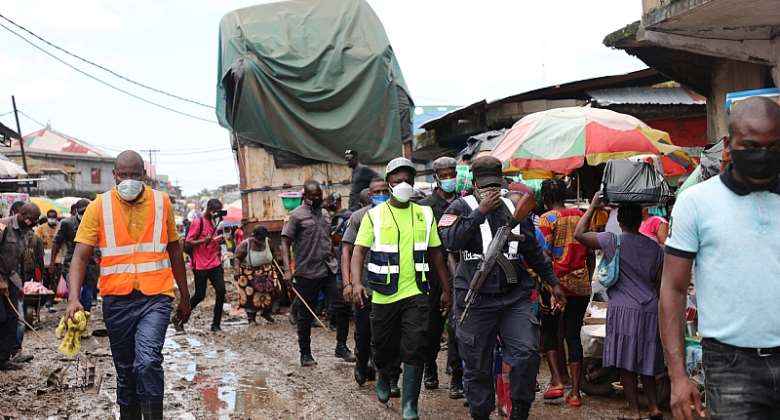 The Monrovia City Government’s Clean-up Campaign is well afoot in various communities across Monrovia and Paynesville and has thus far proved immensely successful. This programme is aimed at cleaning up the streets, removing garbage and abandoned makeshift structures, and addressing the challenges and threats posed by the coronavirus pandemic in neighborhoods by educating residents of Monrovia and its environs.

As such, Monrovia City Mayor, Jefferson T. Koijee and his team of hardworking employees have put boots on ground in ensuring every street corner in and around Monrovia and Paynesville cities is clean. This will give both cities a conducive atmosphere ahead of the pending July 26 Independence Day.

It can be recalled that on Friday, July 2, 2021, the young energetic Mayor and team of employees spent the night in the St. Paul Bridge area brushing and mowing grass and trimming flowers and trees.

Through his farsightedness and genuine leadership, workaholic Mayor Koijee was able to assist the Paynesville City Government to curb the solid waste emergency situation that has posed threats to the livelihood and wellbeing of residents of Paynesville. The Mayor spent the rest of the night with his team clearing the Gorbachev Market and other nearby areas and ensured the City of Paynesville have a better facelift.

Earlier on Saturday evening, the City Mayor and his team of employees were seen clearing drainages, demolishing makeshift structures and removing abandoned vehicles in the Center Street area. They later proceeded to the Waterside Market where they continued the clearing of contaminated sites and removal of dilapidated billboards and directional signs.

Waterside Market is where two thousand modern market tables were constructed for marketers last year by the City Government of Monrovia.

On Monday July 5, 2021, Mayor Koijee and team of workaholics were again in the City of Paynesville clearing drainages and removing garbage while at the same time educating residents on solid waste management. They fumigated waste sites and removed solid wastes. They will continue the clearing of stockpile of dirt in that part of Paynesville tonight before proceeding to Central Monrovia to continue the exercise.

Mayor Koijee also visited the Omega Community where he encouraged officials and members of the Liberia Marketing Association to take advantage of the modern 14th Gorbachev Market that was constructed and dedicated by H.E. Dr. George M. Weah, President of the Republic of Liberia.

Today’s exercise is in continuation of the clean-up campaign that was recently launched by the City Government of Monrovia on Friday afternoon, July 2, at the Monrovia City Hall in the Sinkor belt.

Mayor Koijee is fired up and has his team of hardworking employees’ feet on the gas in getting the job done. The Monrovia City Mayor is ensuring all residents and citizens of the nation’s official capital have a conducive living environment with better sanitation and hygiene.

At the same time, Mayor Koijee and his team are observing the social distancing guidelines and all other prescribed health and health-related measures instituted by the Ministry of Health and the National Public Health Institute of Liberia in curtailing further spread of the deadly coronavirus pandemic.

The Monrovia City Mayor expressed that having a sanitized city is every citizen’s business. He encouraged citizens and residents of Monrovia and Paynesville to join the City Government of Monrovia to keep the both cities clean, green and safe.