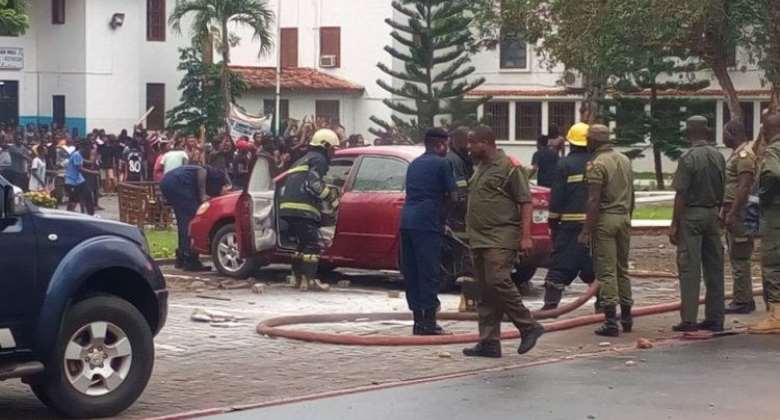 Scenes of the clashes Monday afternoon

The ten students who were arrested by the Legon Police following the agitation on campus Monday have been released.

At least one person was severely injured after students of Commonwealth Hall and Katanga Hall clashed.

The clashes started after students of Katanga Hall from the Kwame Nkrumah University of Science and Technology, (KNUST), who were lodging at Sarbah Hall at the University of Ghana for a debate were seen on a video assaulting a student from Commonwealth Hall.

Students of Commonwealth Hall, popularly known as Vandals, were angered by the video and descended on Sarbah Hall to rescue their colleague, however, they met a fierce resistance by students of Katanga and Sarbah leading to bloody clashes.

The irate vandals vandalised property belonging to Sarbah Hall and tried to force their way to rescue their colleague.

Police stormed the scene and arrested 10 students who were believed to have been involved in the clashes.

Speaking to Francis Abban on the Morning Starr Tuesday, Inspector Dza Worlanyo of the Legon Police said the students were questioned and released.

“The police patrol have been to the campus and all is calm now. Some people were arrested but they were questioned and released”.

He however noted some students pelted stones at the Mensah Sarbah hall Monday night.

“Yesterday calm was restored but late in the night, some Vandals went to Mensah Sarbah Hall pelted stones and later took to their heels”.

Meanwhile, a former deputy chief Vandal now Member of Parliament Clement Apaak said a delegation of the old vandals will visit the campus to help resolve the matter.

“Our leadership would be going to the hall today to urge them to keep calm and allow investigations to go on but we are not taking this issue lightly at all. Whiles we debate the issue, we leave it to the student leadership to be able to have control over their people so as to restrain them from reactions”.