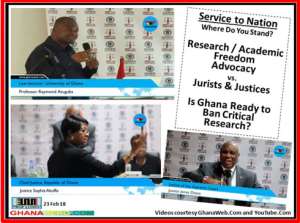 ".... It is axiomatic that justices in a Constitutional democracy...do not control security forces....US Supreme Court Justice Breyer observed that with respect to "trust between people and the Supreme Court" and the exchange between him and Ghana Supreme Court Chief Justice Wood... 'Why do people do what (Justices) say....(is)...the question.'... So, when... was "critical research", exactly the kind employed by Professor Atuguba to study the influence of politics on judicial decisions ascribed the label, "born in America"?... So, it is possible CJ Wood mis-applied, or simply forgot, the lesson learned in Washington, DC, in the heat of Abu Ramadan 2 years ago.... And surely, if judges in Ghana can cite cases from Trinidad and Tobago, to Canada, to the United Kingdom, they can learn a principle or two from America, even... Long live academic freedom in Ghana... Long live "civic participation" freely expressed!..." (Prof Lungu, 14 April, 2018).

For quite a significant amount of time since Part 2 of this series, we were pre-occupied with another project, the Fair-Trade Oil Share Ghana (FTOS-Gh) campaign's "Critique of Petroleum Commission's 2018 Presentation to the Council of State", on behalf of the Diaspora Executive Council (DEC). That paper, produced in several media formats, is now available at the GhanaHero.Com website, and also via YOUTUBE video (simply Google using the words in the title).

So, moving on, in this concluding part of our paper, we will state affirmatively that not only was Professor Atuguba practicing freedom of speech and of the academy in his presentation of analysis of the political-bent of Ghana Supreme Court Justices according to who appointed them, Professor Atuguba was indeed practicing and engendering the "the values of civic participation" in US Justice Stephen Breyer-speak.

It is axiomatic that justices in a Constitutional democracy do not control security forces and armies. It is citizens' civic participation, their socialization and learning experiences, and expressions conveyed through the exercise of freedom of speech and of the academy, practiced in public, in civic forums such as the event sponsored by GIMPA 15 February, 2018, and in media, that informs, sensitizes, and even indoctrinates citizens about the important role of the courts in protecting every other freedom they care about.

US Supreme Court Justice Stephen Breyer broached the subject of "civic participation" during a discussion at the 2016 "Inaugural Celebration of the Paul Tsai China Center" at Harvard University before a group of Chinese students when the he spoke about a visit to his office by then-Chief Justice of Ghana, Georgina Wood, in 2010. As reported by Adrian Rivera in 2016, Justice Breyer observed that with respect to "trust between people and the Supreme Court" and the exchange between him and CJ Wood:

"...Wood intended to ask advice on how to improve her country’s court system and ensure protection of basic human rights and democracy...'Why do people do what we say?' Breyer recalled Wood asking, to which Breyer responded 'That’s the question.' Breyer told the Ghanaian chief justice the process of building trust between the country and the court 'is slow'... In the question-and-answer session, Breyer extolled the values of civic participation. He also called the Constitution a boundary document that tells the government what is not allowed...".

We will note here that it is noteworthy that while current Supreme Court Chief Justice (CJ) Sophia Akuffo may have scuttled out of the US immediately after earning her law degree from Harvard University to a position in Nana Akufo Addo's law office in Accra without so much as a 6 month's stint as a practicing lawyer or clerk in the US, it would be then-Supreme Court CJ Wood who, while Chief Justice, would travel to the US to learn from Justice Breyer and other US justices. CJ Wood wanted to know directly from the US justices how the rule of law somehow prevails under a system where control of forces is not in the hands of justices. This, even as the justices have proposed to the American people that it is they, the justices, who have final authority over what is constitutional and/or unlawful in America.

Possibly, CJ Akuffo could learn a lesson or two from the person she replaced.

We imagine many people will agree that even "Importing...'American type of research'", including customs and principles of law and administrative justice that promote democracy and support citizens' civic participation is useful. At the same time, they may argue democracy starves when nations attempt to live national life through untested, un-researched "cautionary proposals" that frown on useful knowledge from any source merely because they (Ghanaians, in this case) "are not used to that" which merely happens to come from Americans, but at heart may not even be wholly "American".

When, we must ask, was "critical research", exactly the kind employed by Professor Atuguba to study the influence of politics on Supreme Court decisions ascribed with the "born in America" label?

Was that by accretion? By whom, CJ Akuffo? Again, from our question in Part II of our paper, why should a society allow any common man or woman to go to school, to train as a lawyer, to practice the laws, and be appointed a judge and executive of judges, if the society has never allowed that, ever, for that kind of person, for that group of people, for that segment of the population, from that other part of their world, merely for that person to disturb the "inward-looking" comfort of those who already have authority, those who already control resources, those who already have power?

Surely, from the public record about CJ Wood's visit to the justices in Washington, DC, Justice Breyer never touched the subject of reverence by compulsion:

"The Court..., deserving of the utmost respect and reverence...for...(the)...democratic enterprise, as a nation, is to succeed..".

That, we found, direct from CJ Wood's court a few short years after her DC visit, in 2016, in 2016 "Ramadan and Another v Electoral Commission and Another.

What are we looking for in 2018? Manufactured "respect" and artificial "reverence" for an institution that does not own or control forces?

So, it is conceivable that Chief Justice Wood mis-applied or simply forgot the lesson learned in Washington, DC, in the heat of Abu Ramadan 2 years ago.

In that travesty of a ruling, Wood's Court went way farther than the Ghanaian Constitution "does not allow" by using a 1968 principle of law reverence by compulsion advanced by Victor Owusu and parlayed by Chief Justice Edward Akufo-Addo, in the Legon Observer case, formally the "Republic vs Liberty Press Ltd".

Did CJ Wood and CJ Akuffo conveniently forget that during the charging, deliberation, formalization, and publication of the "Legon Observer", that Ghana was in fact under a military dictatorship sponsored by external powers, that Ghana was actually under the NLC (Nonentities, Liars, and Crooks), same individuals who sponsored Victor Owusu, and as well, parlayed Justice Edward Akuffo Addo, both of them, to higher office as Attorney General and Chief Justice, respectively?

Yes, those were individuals whose sponsors overthrew the duly-elected government of Kwame Nkumah two years earlier in 1968, individuals acting on behalf of those same coup plotters when they crushed the Legon Observer magazine, freedom of speech, and academic freedom with niceties about respect and demand for reverence for courts.

And so, it came to pass that none other than Mr. Martin Amidu, now appointed as Ghana's first ever "Special Prosecutor" by the son of that Chief Justice from he NLC era in 1968 declared that the punishment and jailing of the three people in Abu Ramadan was unconstitutional and avoidable.

We are with Mr. Amidu on this one, as we were with Dusuuru Bemba in the other travesty of justice with respect to Anane vs. CHRAJ, another case decided and published under none other than CJ Wood.

To the point, Abu Ramadan would never occur in Justice Breyer's America where there is "justice" and the rule of law; except perhaps in recent years and months under an executive intent on running America as their own private company and kingdom, just like Turkey's Recep Tayyip Erdogan runs Turkey, and Vladimir Putin, Russia.

And, if judges in Ghana can cite cases from Trinidad and Tobago, to Canada, to the United Kingdom, etc., they can surely learn a principle or two from America, including the values underpinning baseline critical thinking skills and proficiencies precisely the kind CJ Wood and CJ Akuffo ought to expect of law clerks under their tutelage, of employees under their supervision. And of the methodology and analysis of critical research (like Professor Atuguba's) that examine the influence of power in social institutions and deliberative bodies funded by citizens with taxes and wealth of the commonwealth.

After all, Courts in Ghana must also rely on other officials with power for real, tangible, resources. For, as night must follow day light, the Supreme Court in Ghana is not responsible for programming, planning, designing, funding, and constructing their own facilities; nor do they pay their own salaries and benefits derived from taxes wealth of the commons.

And so, we were reminded this year by none other than CJ Sophia Akuffo:

“...The government that is responsible for our court buildings, the High Court, the Circuit Court, Court of Appeals, Supreme Court and so on and so forth, if they really take a look, they will see that we are the most frugal of the governance institutions and when we say we need, we do need so that we will be able to run and administer justice to the people of Ghana with full competence...”

Can beggars, even respectful beggars, be choosers? But this: "...administer justice to the people..."!

How about that? How about "administer justice with the people", in critical, communicative, participatory, fashion?

That is actually stuff they teach in America, to law students and students in public administration and policy classes, to students like those who spent that evening with Justice Breyer 2 years ago at Harvard University and learned about the importance of principle of "civic participation" to the status of the Supreme Court of the United States in the eyes of the people in America.

MESSAGE: As the lesson on "civic participation" instructs us, neither Abu Ramadan nor Anane vs. CHRAJ would occur in normal times in a Justice Breyer America.

And so, it merely took a political pen to commute the sentence and punishment imposed by Justice Wood, to set free that travesty known as "Abu Ramadan". That action was by none other than the institution that control resources, the executive, and surely in accordance with that same Constitution.