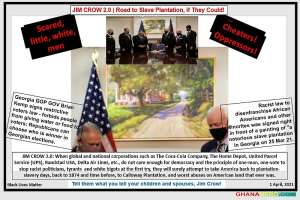 USA (25 Mar 21): Georgia republican governor Brian Kemp cancelled millions of voters and “proudly” posted a photo of himself signing SB 2020, the restrictive voters law that bars people from giving water or food to voters in long lines created by his own effort, and allows his group to choose who is elected in elections, among other anti-democratic measures. Bill was signed in front of a painting of "a notorious slave plantation in Wilkes County”, as a group of 6 white men gazed fondly upon Kemp. At the same event, a young African-American woman, a Georgia legislator on business, was arrested and charged with multiple felonies for knocking on the door in order to witness the shameful, voter-cancelling signing event.

African leaders, scream for African-Americans in American just like James Brown screamed for Ethiopia, and Texas Congressman Mickey Leland died for Africans in the Hills of Gambela nearly 32 years ago.

“In a backlash to 2020’s historic voter turnout, and under the pretense of responding to baseless and racist allegations of voter fraud and election irregularities, state lawmakers have introduced a startling number of bills to curb the vote. As of March 24, legislators have introduced 361 bills with restrictive provisions in 47 states…a 43 percent increase in little more than a month” (Brennan Center for Justice, 2021).

The barriers to the vote by partisan Republican officials in the United State are being justified as effort to protect “election integrity” through 361 bills by no less than 47 states as of 5 April, 2021.

But, one cannot subvert “confidence” in any enterprise (e.g. voting) by pushing lies and then attempt to promote and engender “confidence” by enacting laws that add unnecessary burdens (long lines, superfluous voter identity requirements), usurious laws that disparate impact on a subset of the citizens.

From the state of Arkansas to Florida, to Georgia, to Arizona, to Wisconsin, to Texas, Republican state legislatures still profiting from gerrymandered electoral districts of previous census, are enacting laws directly aimed at disenfranchising African-American, Native Americans, and other minorities. It is without doubt a Jim Crow power grab by whites in State Capitols squarely aimed at American Blacks, and black women in particular, whose activism and years of organizing effort helped save American democracy just 2 decades and a solitary year into 21st Century America.

However, all self-respecting observers know that those are barriers: Barriers to the franchise.

It is all a farce built on the “Big Lie” promoted by Donald Trump long before the first votes were ever cast in the 2020 presidential elections in America.

And, it is happening because of Stacey Abrams’s Raphael-Warnock-Jon-Ossoff Democratic Senate victories in Georgia on 6 January, 2021.

Their collective works and legacy have greatly contributed to making American ever more, a beacon of democracy in its diversity, economy, social life, and spiritual harmony. And. it is that commitment to a Burning Spear “Social Living paradigm that ensured victory for the Democratic party, and loss, deservedly, by Donald Trump’s Republican party, thereby giving American democracy another chance for survival even as another group of racists attacked the United States Capitol.

With the victory in Georgia, Democrats now control the American presidency and both houses of the legislature, offering African governments an opportune occasion to demand equal representation and equal vote for African-Americans and other racial minorities in America, and for Black Women.

This problem is bigger than America, and the opportunity for African leaders cannot be any more crucial.

It is time for African leaders on the Continent to directly speak to the racist Republican legislators: ENOUGH.

We are saying it is not sufficient for African leaders to rely on private citizens and African social networks to critique racism in America through hashtags and commentaries online, important as those modes of communications are.

African leaders must act now, in part, as response to Trump’s egregious behavior toward all peoples of African origin, and to stand up for principle, grounded in objective, fact-based assessment about the manner and conduct of the 2020 presidential elections in America.

THERE WAS HISTORIC PARTICIPATION!

THE ONLY FRAUD WAS THE BIG LIE DONALD TRUMP SOLD TO THE FANATICS AND THE LIKE THAT ATTACKED THE UNITED STATES CAPITOL ON THAT SAME DAY.

American Citizens, Foundation, and Corporations Have Supported Africa for Generations:

For generations, African-Americans and racial minorities in America, including many women and corporations, have provided support for Africans all over the Continent.

Such organizations include the Rockefeller Foundation, Ralph Bunche Institute, Open Society Foundations, TransAfrica, and others too numerous to mention, including W. E B DuBois. They have supported Africans all over the Continent, since before the struggle for independence during colonial days, to the era of education and social capital development in the 1950s-1960s, to recent “Back to Africa” tourism-based programs across Africa.

Today, nearly 2 weeks since the Governor of Georgia signed the Jim Crow 2.0 bill under the gaze of a painting of a slave plantation from antebellum America where generations of Africans toiled under the harsh Georgia sun to grow the Georgia economy, it is time for African leaders to lend their voice to the fight for equal rights in America.

African Leaders Must Support Those Fighting for Voting Rights in 21st Century America:

The United States Cybersecurity & Infrastructure Security Agency (CISA) issued a finding statement on the 2020 presidential elections in the United States which saw the defeat of Donald Trump who engaged in the “Big Lie” even before the first votes were ever cast:

“The November 3rd election was the most secure in American history... There is no evidence that any voting system deleted or lost votes, changed votes, or was in any way compromised...While...there are many unfounded claims and opportunities for misinformation about the process of our elections,...we have the utmost confidence in the security and integrity of our elections..." (CISA, 12 November, 2020).

The 2020 presidential elections in the United States was secure in every American state and county. The process was fair and a lot balanced than Americans had even seen of any previous election. All that, in part, explains why that elections saw the highest turnout since 1900, as “two in three of all eligible…voters” cast a ballot, according to the Washington Post.

To the point, African leaders should provide moral and material support, if necessary, to people and entities in America fighting the good fight - for freedom, liberty, and the right to vote unhindered by restrictions that emanate purely from racist intentions and policy.

The last we checked, the following individuals and organization have been at the tip of the spear fighting for equality and equal access to the vote. They are exemplary American business leaders, managers of foundation, politicians, social activists, and agencies engaged in the struggle for equal vote and representation. Many of these people and entities already have standing in African countries, including:

“…all of corporate America to publicly and directly oppose new laws that would restrict the rights of Black voters, and to use their clout, money and lobbyists to sway the debate with lawmakers”.

African leader must support these noble warriors and conscientious world citizens who are right now engaged in the fight to inspire American corporations to resist the rollback of the vote among minorities in America, African-American voters, in particular. In the face of severe and oppressive restrictive changes to election processes by many white legislators across America, African leaders on the continent must lend their voices in condemnation.

Enough, Governor Kemp and your type!

Let it rain shorter lines to the vote!

Let it rain equal participation in the electoral process!

Let is rain Freedom, Liberty, and Equal access to the vote!

Enough, this Republican prejudice against African-Americans!

African leader, what are you going to do?

So it goes, Africa!