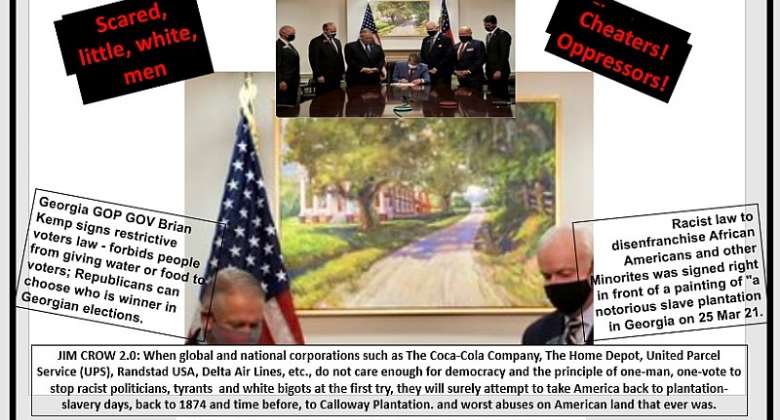 Civic, cultural, religious, business, and political leaders of Africa, what are you going to do?

In the face of deeply racist politics attempting to severely disenfranchise African-Americans in 21st Century America, to rob them of their liberty, freedom, and the vote in America, what are you all doing individually, and collectively?

African leaders, even if they choose to act independent of their counterparts in other borders, ought to know that they also have power over companies investing in Africa and profiting from economic activities on the continent.

This is not just a Georgia matter.
This is not just a Texas matter!
This is not just an American matter!
From Algeria, to Ghana, to South Africa; from Ethiopia, to Liberia, to Nigeria, American corporations must be inspired to directly challenge racist voting laws and minority disenfranchisement in so-called “Red States” by pulling their financial support from racist Trumpian politicians in America.

We are saying that African civic, cultural, religious, business, and political leaders should without further delay, call American corporate leaders with business interests on the African continent to account, just as ordinary Americans, the poor and marginalized, and African-American business leaders all over America are challenging those same corporations to do a lot more than issue meaningless, oftentimes weak, policy statements about their “opposition” to Jim Crow laws in America.

The last we checked, African leaders have influence on American corporations either operating in Africa from their US headquarters, or operating from Georgia, USA, including the following:

What African Leaders Can Do to Stop Racial Discrimination in Voting In America:

African leaders should put maximum pressure on American corporations and their business executive operating in Africa, not as punishment, but as minimum requirement for true civil engagement and the recognition that the human rights and voting rights of African-Americans are sacrosanct and important values within the spheres of international relations.

We are saying African leaders ought to order their Embassies and Consulates in Washington, D.C. and other American cities to issue statements of support to African-American voters and other racial minorities all across America.

African leaders must ask for rollback of all anti-democratic laws in the good fight for democracy in America just as Dr. Kwame Nkrumah, in the pursuit of African liberation and unity, proudly welcomed into Ghana during 1957 through 1964 Reverend Dr. Martin Luther King, Malcolm X, Mohammad Ali, who were all labelled as communists, subversives, and worse, by J. Edgar Hoover’s FBI in the runup to the historic 1964 civil right bill.

In fact, there is no reason why President Muhammadu Buhari of Nigeria and President Nana Addo Dankwa Akufo-Addo of Ghana cannot themselves issue statements of condemnation of white racists in America who are bent on taking away voting rights from African-Americans.

Why is this mission not as important, perhaps more important, even, than official statements of condolence to the former British colonial government on the death of Prince Philip, Duke of Edinburgh?

Similarly, in southern Africa, we see no reason why President Cyril Ramaphosa of South Africa, fresh from attending the funeral of anti-science, COVID-denying, John Magufuli of Tanzania, cannot take a moment or two to also issue a statement of support for democracy fighters from Georgia, to Louisiana, from Florida, to North Dakota, from New York, to Los Angeles.

When can we expect African leader to remind American leaders about the importance of one-person, one-vote, in a society of equal citizens in 21st Century America?

African civic, cultural, and religious leaders should abandon recent-day culture wars o the Continent, none of which can feed, clothe, house, or heal Africans, and lend their voices to freedom, liberty, and the sanctity of the vote in 21st Century America.

What do you say, Bishop?
What do you say, Chief?
What do you say, Mallam?
We are saying that African civic, cultural, and religious leaders cannot afford to be spectators in this struggle, or worse, remain mute on this 21st Century American problem that gained more steam with that fully debunked “Big Lie”, that Donald Trump won the election against Joe Biden, which his own agency proved was far from the truth, a big lie.

African leaders should individually and collectively voice their support for action by the United States Congress to re-set democracy right, in America.

African civic, cultural, and religious leaders should, individually, and collectively, publish their support for United States House of Representative bill, For the People Act, H. R. 1 (2021).

“For the People Act” (H.R. 1) is the bill Democratic Speaker of the House, Ms. Nancy Pelosi, has sent to the Senate to repair the damage caused by previous United States Supreme Court decisions. The first, Citizens United, said that corporations in America are people, the have free speech rights, and therefore, corporations can give to political campaigns without limits. The second case, the Shelby Decision, abrogated two key provisions of the 1965 Voting Rights Act which required preclearance on the part of certain southern states (Georgia, Alabama, Mississippi, South Carolina, etc.), if law makers in those state wanted to change election laws that affected the voting rights of minorities, to prevent “racial discrimination”. Then, there is today’s Jim Crow 2.0 measures shamefully spear-headed by Georgia and Texas.

For the People Act, H. R. 1 (2021) will:
“….expand Americans’ access to the ballot box, reduce the influence of big money in politics, strengthen ethics rules for public servants, and implement other anti-corruption measures for the purpose of fortifying our democracy, and for other purposes.”

We say:
African civic, cultural, and religious leaders must be on the side of good history.

Being mute is not an option for the African leader.

Your children and grandchildren will want to know where you stood, what they did exactly, at precious little cost to yourself and your countries, when the preeminent racist American president who called your countries “shitholes” was kicked out of office and his “Big Lie” was quickly uplifted on a bed of racist, confederate flags, and sold as “election integrity” for the naked purpose of taking the vote away from their sons and daughters in America.

African leaders must today bring vigor into the organizing program and channel the strong and indefatigable voice and strength Fannie Lou Hamer of Ruleville, Mississippi, who ultimately “passed” the tests thrown at her by white, racist, town clerks in many attempts to simply vote, at great peril to her life and family’s well-being:

“…We been waitin' all our lives, and still gettin' killed, still gettin' hung, still gettin' beat to death. Now we're tired waitin'...They talked about how it was our right, that we could register and vote. I had never heard, until 1962, that black people could register and vote… I guess if I'd had any sense, I'd have been a little scared—but what was the point of being scared? The only thing they could do was kill me, and it kinda seemed like they'd been trying to do that a little bit at a time since I could remember…(Fannie Lou Hamer (Fannie Lou Hamer).

African leaders must be on the good side of history: Help America stop white racist tropes from further killing democracy, and the right to freely vote in America.

Being mute is not an option for you, African civic, cultural, and religious leader!

Enough.
NOTE: This article does not in any way, what so ever, seek to provide cover or support for political leaders in China or Russia, and their many anti-democratic and harmful laws and actions on their own peoples, on many African countries, and other countries. In this sense, the United States is not part of the equation because the U. S. government headed by Donald Trump, supported by Senator Mitch McConnell of Kentucky, chose to be subservient to Putin’s Russia, for political advantage. It was all part of the big conspiracy and lie. It is always a terrible idea to give aid and comfort to tyrants, no matter where they happen to be. The subversion of American democracy, or any other country’s democracy, for that matter, by foreign interests, must be resisted and punished, collectively.