The Worst Is Yet To Come For The Interdicted Officers of UEW and their Sidekicks. 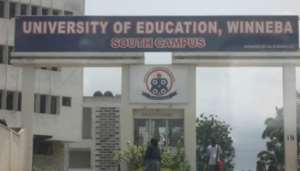 Prof. Victor K. Owusu’s unprovable claim of huge congregation expense, stems from his jealousy about the very successful congregation ceremonies where all Convocation Members were, for the first time, invited to have refreshments with the invited guests at one venue in all the days at all UEW campuses.

These crooks would have preferred that the money was kept and paid as honoraria to the 3 greedy top leaders in their monthly trips abroad. Which University would waste funds on just three (3) nation looters in this manner?

Almost all staff, (except the nation looters and their blind followers) are very happy nowadays because among other things, their claims are paid promptly. The funds are no longer invested for a period of time for the greedy 'three musketeers' to share interest on. People are able to express themselves more freely at meetings. For the information of Prof. Victor K. Owusu, the controversial 5% that was being shared among only a select few is being abolished!

Prof. Victor K. Owusu has still not sued me to get me removed from office as Coordinator of the UEW Business School.

I am, by this medium, appealing to him with all humility and sincerity, to sue me and stop the empty noise that only serves to compound the woes of his financiers. The people whom the interdicted officials secretly go to and plead for clemency, are reading the slangs, innuendoes and all the other unprintable words that Prof. Victor K. Owusu put out against the Council Chairman, who is the President's representative at UEW, and the other respectable members of society that he cast slurs on.

An insult directed at the Council Chairman, is an insult on the President of the Republic of Ghana.

It should be noted that the Business School was created only this year, and some of the heads of department were even 'imported' from other faculties. If there is anything wrong with a lecturer who originally belongs to that faculty being made a Coordinator, then sue me.

It was business as usual for Prof. Avoke to dish out appointments to his wife and all UTAG executives, 'no be so'?

By the way, when did Prof. Mawutor Avoke make all those appointments?

That alone is a crime which he must be ready to deal with. The evidence (records) will prove Prof. Avoke's clandestine and cunning overtures at the appropriate time in court.

A reasonable person does not expect Prof. Victor K. Owusu and his bandwagon to own up to the contribution of Selete Avoke in Prof. Mawutor Avoke's publications. That's 'academic honesty' thrown to the dogs!

Let the 'gang master', Prof. Victor K. Owusu explain to the taxpayer about the applications to Senior Lecturership for Vincent Adhzalie Mensah and Samuel Ofori Bekoe. The corrupt immediate past Registrar should be made to tell the taxpayer how these 'lazy scholars' performed!

The actions of Prof. Victor K. Owusu and his collaborators are not out of the blue. Such actions were expected because their greedy immediate past Registrar has been formally requested to return the eight (8) ceiling fans and two (2) air conditioners which he removed from his official bungalow when he was recently vacating that residence!

Those items, as well as the many household items which are less than three (3) years old but which he unlawfully took to his private residence must be returned just as the letter from UEW Management indicated! Is that why Prof. Victor K. Owusu and his fellow paid guys are fuming and peddling falsehood about the Acting VC?

These pathological liars have the audacity to state that the Ag. VC is in office illegally? Let Prof. Victor K. Owusu and his 'foot soldiers' go and read the UEW Statutes. But will they even understand if they stopped drinking and went to read? Their interpretation of the recent Supreme Court decision regarding the Winneba High Court ruling provides an answer to the above rhetorical questions.

Prof. Victor K. Owusu and his fellow 'hired assassins', must be educated about the fact that Vice Chancellors Ghana (VCG) was being autocratically run by Prof. Kumah, (UMaT VC, and paternal cousin of Prof. Avoke) and Mr. Peter Kaba, the overstayed Executive Secretary of VCG. These crooks should go and remind Mr. Kaba that his retirement date is long past - VCG is not a family property. If Prof. Victor K. Owusu cares to know, most Vice Chancellors (VCs) today are embarrassed about having allowed themselves to be deceived by Peter Kaba and Prof. Kumah. These individuals would go to beg the Education Minister in his residence at dawn for Prof. Avoke, and in daytime, assume a 'macho attitude' at VCG meetings and in the media. Who are they attempting to deceive?

Furthermore, most VCs are bowing their heads in shame after having allowed Theophilus Ackorlie to become their scribe in that bogus Press Statement they published in the dailies at the 'genesis' of the UEW legal tussle. How can such embarrassed individuals gather courage to invite the Ag. VC of UEW to their meetings?

Anyway, whether the Ag. VC is invited by VCG to its meetings or not, is irrelevant. Act 672 which established UEW makes no reference to VCG having a role to play in the administration of UEW.

Among his many tales, Prof. Victor K. Owusu falsely claimed that there were no EOCO investigations currently ongoing into the affairs of UEW. He should ask Prof. Asabere-Ameyaw (former VC of UEW), CY Akwaa-Mensah (former Registrar of UEW) Ms Sena Dake (interdicted Internal Auditor), Mr Fiifi Yankson (retired Director of Development), if they have not, in recent days, been to EOCO to answer questions! Prof. Victor K. Owusu and his colleague crooks will soon laugh on the wrong side of their ugly faces!

Feature Article
Powered By Modern Ghana
Is Bagbin still standing by his corruption tag on Mahama?
From 2021 Should Parliament Aim To Make Ghana Africa's First No-Go-Territory For Ruthless-And-Exploitative-Employers?
Sperm To Dust: Life As Is Vrs As We Want It To Be
A Quick Note To Valarie Wood-Gaiger, OBE - Founder Of Grandma International
US Meddling In The Affairs Of The River Nile Basin: The AU Must Act!!!
NPP has gotten themselves more confused
Impunity and Carefree Violence: Australia’s Special Forces in Afghanistan
Nigeria's Problems Are Deeper Than SARS
Are Akufo-Addo's Daughters More Ghanaian than John Mahama's Wife?
COVID-19 Updates Live Dashboard
TOP STORIES